Continuing economic expansion in the U.S. does not appear to be translating into rapid growth in construction spending 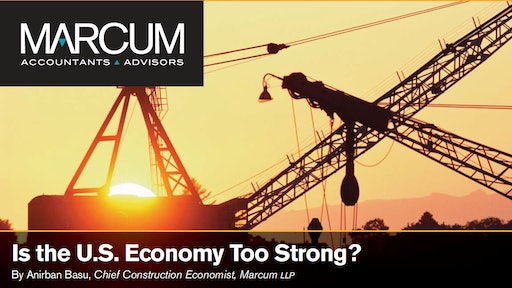 Continuing economic expansion in the U.S. does not appear to be translating into rapid growth in construction spending, concludes the Marcum Commercial Construction Index for the first quarter of 2018. The report from Marcum LLP’s national Construction Services group found that nonresidential construction spending in March, the most recent period for which construction data are available, declined 0.3% on a monthly basis and expanded by just 2.5% year-over-year on a seasonally adjusted, annualized basis. 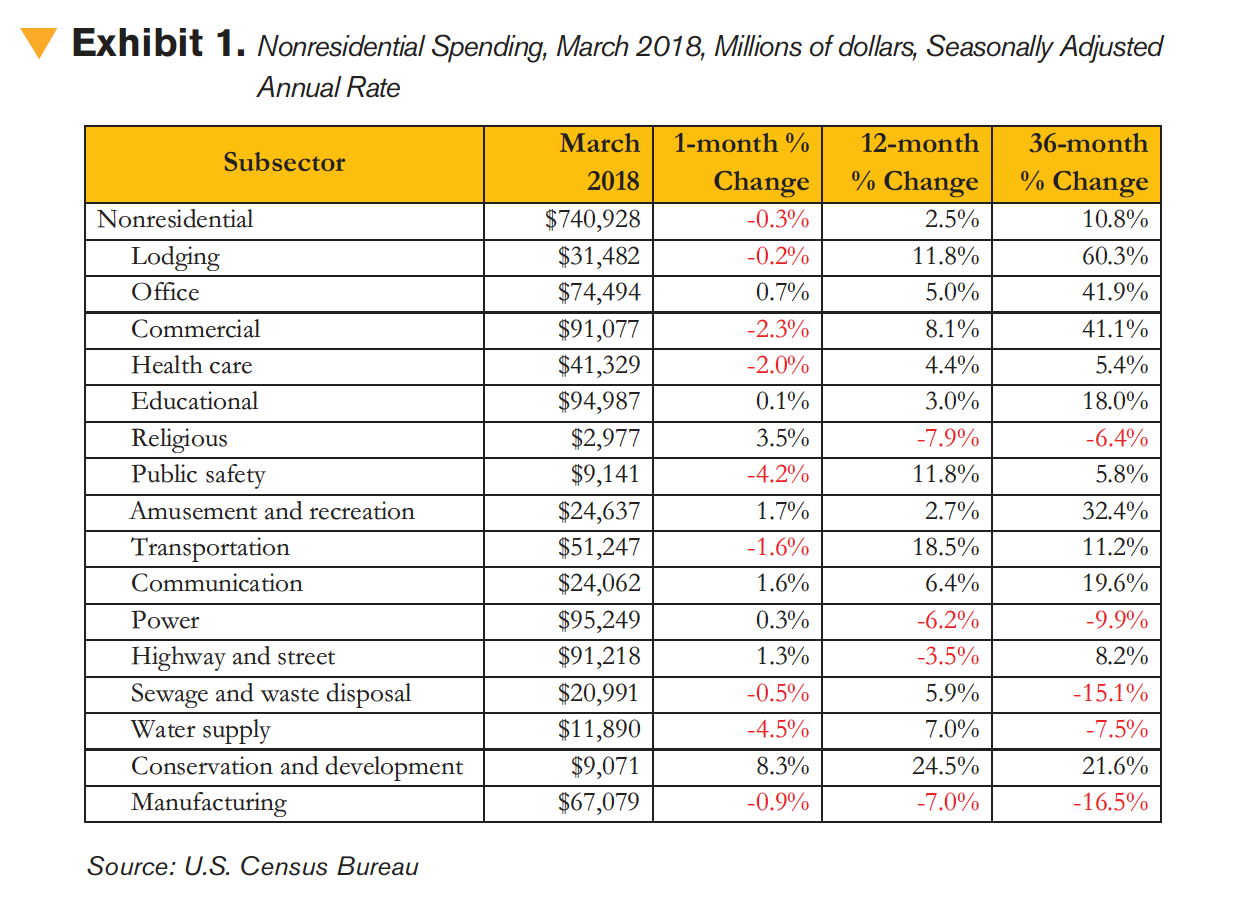 “Much of that growth, perhaps all of it and then some, can be explained by rising construction materials prices and expanding compensation costs,” writes Anirban Basu, author of the report and Marcum’s chief construction economist. “Despite first quarter GDP data indicating brisk expansion in nonresidential investment, private nonresidential construction spending is up by roughly the inflation rate, indicating that that the volume of services delivered over the past year has not expanded in real terms – at least if these data are to be believed.” 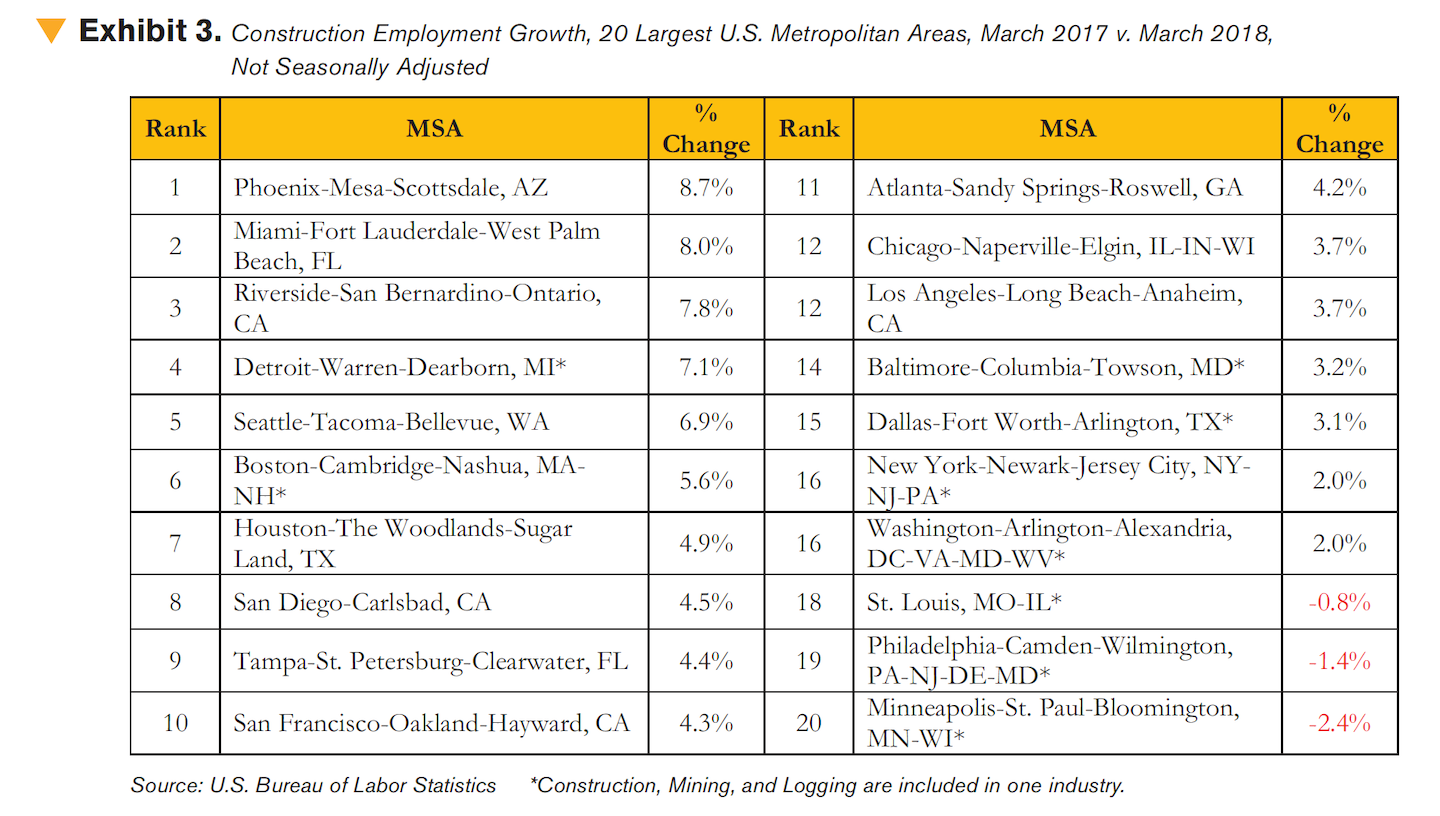 Basu contrasted lackluster spending data with more optimistic construction job growth. “The construction industry has added 257,000 new jobs, representing a growth rate of 3.7%, over the past year. That represents a significant growth in construction staffing. These statistics are more consistent with anecdotal and other data than the spending data,” he wrote.

Seventeen of the 20 largest U.S. metropolitan areas experienced growth in construction employment in the 12 months ended March 2018. The greatest gains were seen in:

The report also noted continued improvement in the overall U.S. unemployment rate, which declined to 3.9% in April 2018. However, Basu attributes the decline to shrinking labor force participation, which he says should be rising, based on available job openings: “The fact that labor force participation has been declining strongly suggests that human capital shortages will continue to worsen, and that implies faster wage growth (fine), more inflation (not so good), and higher interest rates (problematic for many).”

While higher borrowing costs can be expected to flatten construction activity in the middle- to long-term, he foresees a positive trend for the construction industry in the near-term: “[A] combination of recently enacted tax cuts, consumer and business confidence, positive wealth effects attributable to the performance of financial and housing markets, a stronger global economy, and accommodative global monetary policy should position 2018 to be the best year for economic performance in America since 2005.  Since nonresidential construction lags the overall economy by roughly one year, even if the broader economy stumbles next year, nonresidential construction activity is likely to be elevated in 2019.”

Joseph Natarelli, national leader of Marcum’s Construction Services Group and an office managing partner in New Haven, CT, said, “Aside from the labor pressures of availability and wage increases which we nearly always note, we’re seeing inflation and interest rates rise at the same time. That forecasting cocktail was garnished, this past quarter, with unpredictable and less than favorable weather, which is a real negative factor in many major U.S. construction markets at this time of year. Of the 16 nonresidential subsectors, only four had double-digit, 12-month growth — Lodging, Public Safety, Transportation, and Conservation and Development. Let’s hope that future infrastructure construction turns around the 12-month negative growth in Highways and Streets.”

One of the leading construction accounting firms in the U.S., Marcum LLP's Construction group provides audit, consulting, and taxation services to clients ranging from start-ups to multi-billion-dollar enterprises. The group's professionals, among the country’s foremost experts in construction accounting, are frequent industry authors and speakers and also serve as technical reviewers for the AICPA’s construction audit and taxation guides. In addition to the quarterly Marcum Commercial Construction Index, the group publishes the annual Marcum JOLT Survey Analysis, a discussion of employment trends in the construction industry. For more information, visit www.marcumllp.com.