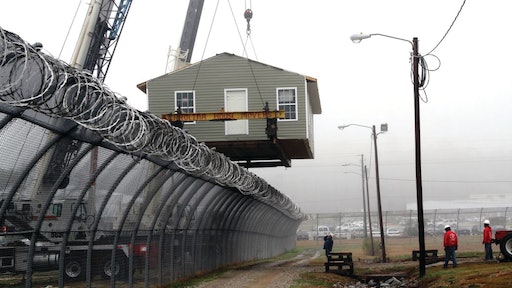 To lift the approximately 33,000-lb. structure over the fence, White Crane operated both cranes at a 95-ft. boom length at a 45-ft. radius.

Lift a 33,000-lb. house over a fence, on a windy day, to place it on a truck for transport to its final location

Last year the Department of Juvenile Justice (DJJ) in West Columbia, S.C., worked with Habitat for Humanity to build the first-in-the-state Habitat house built by kids within in the juvenile justice system. The catch: frame construction had to be completed behind the DJJ facility’s fence, as the kids were not allowed to construct it at the permanent building site.

White Crane Company, Inc. of West Columbia, is a member of the mechanical contractors association who volunteered to help instruct the kids on building techniques. "It's a great program," said Ryan Flynt, vice president of White Crane. "The kids learned important trade skills, and the house helped a deserving community member move into a home of their own."

After framing was completed inside the DJJ facility, it had to be lifted over the fence and onto a truck, so the structure could be moved to its final destination. White Crane donated the cranes and rigging manpower to perform the lift.

The new structure’s size required a tandem crane lift to safely hoist the house. One of the primary challenges was "we had to estimate the weight of the house," said Jason Flynt, president of White Crane. Additionally, it was windy the day of the dedication ceremony. "The winds picked up, and we had to start the lift before the ceremony was finished," he said.

To lift the approximately 33,000-pound structure over the fence, White Crane operated both cranes at a 95-foot boom length at a 45-foot radius. The Crossover 6000 charts a 23,100-pound capacity at these settings, which in the state of South Carolina enables up to 17,325-

All three machines are outfitted with special attachments to better show their effectiveness in the utilities market
Manitowoc Cranes
October 2, 2017

This type of high alpine project is enormously challenging on equipment so the crane service provider decided to rely on the proven strengths of its Terex TC 2800-1 lattice boom truck crane
August 28, 2017

If you told John Forrest a decade ago that mini skid steers would be a major part of his three stores’ equipment rental fleet, he would have thought you were crazy. But today the machines make up the bulk of the Farrer Brothers rental fleet. Read more.
March 1, 2021
Boom Truck

The 60-ton NBT60 is the biggest crane in National Crane’s history, and it features a 128 ft. five-section, full-power boom
National Crane - a Manitowoc Brand
March 5, 2014