Toyota Material Handling is celebrating the 750,000 forklift to roll off the company’s North American production line. 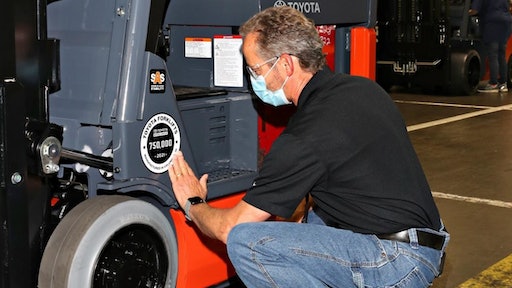 Toyota Material Handling (TMH) has completed the 750,000 forklift to roll off the line at the company’s factory in Columbus, Indiana.

The company began its forklift manufacturing operations in North America in 1990, and by 2015, had produced 500,000 forklifts. TMH has increased that number by 50 percent in the last six years. The company’s production facility located in Columbus was the first plant to manufacture Toyota Forklifts outside of Japan.

“This milestone is a testament to the market’s demand for the quality and reliability of Toyota forklifts, and our unwavering commitment to serving our customers,” said Jeff Rufener, TMH president and CEO. “This achievement was made possible by the tireless efforts of our world-class team of Toyota associates, dealers, and suppliers. We look forward to continuing to find ways to meet our customers’ evolving needs.”

TMH has consistently invested in expansion opportunities to enhance its Columbus plant, which has grown into a 1.5 million-square-foot facility – six times larger than when it opened in 1990.

“Over the last 31 years, we have become more vertically integrated so that we can respond to customer demands more quickly,” said Tony Miller, TMH senior vice president of operations and engineering. “We have also significantly expanded our product line to meet our customers’ evolving needs. Our incredibly talented and dedicated team is committed to producing our next 250,000 units even faster.”

Toyota Forklifts began its domestic manufacturing operations at its Columbus-based plant in 1990. Since then, more than 700,000 forklifts have been produced.
Toyota Material Handling USA
October 29, 2020

Hyundai plans start development of hydrogen-fueled excavators and forklifts this year with roll-out of the technology by as soon as 2023
Hyundai Construction Equipment Americas Inc.
March 3, 2020

Manage Your Fleet from Anywhere

TVH in the Americas is offering telematics solutions from GEM One.
October 23, 2019