Work zone crashes are on the rise in 2020, causing worker injuries and deaths. What can be done to make the traveling public understand their role in keeping workers safe? 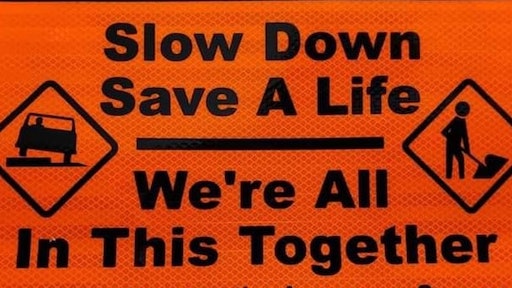 The world is certainly facing more turmoil than we're used to in 2020, but luckily for the construction industry, road work has continued as normal in most areas of the United States.

While many workers welcome the opportunity to continue doing their job, some fear for their lives each day they enter their jobsite as work zone accidents and worker deaths are on the rise.

"This has been a hard two weeks on the road construction industry," Melissa Shaffer, driver with the Shelly Company in Ohio said. "There have been two deaths in Ohio and another person hurt pretty bad."

Unfortunately, Ohio has seen the worst of these incidents with over 13 crashes in to construction work zones since February. But they are not alone in these type of tragedies. There have been reports of worker deaths and close calls in Wisconsin and Indiana as well.

We know that building and maintaining roads can be a dangerous business. We do all we can to keep our crews safe, but it only takes a momentary distraction for a car or truck to cross into a work zone, causing an accident. As a result, over 3,300 people — including an estimated 650 workers — have been killed nationally in work zone crashes over the past five years.

So again we ask the question, what can be done to keep our workers safe?

The industry is working hard to find ways to keep workers safe by developing connected technology that can alert drivers through their vehicle of an upcoming work zone as well as inform the construction crew when a high-speed vehicle may be approaching them.

To get more ideas on what might help, we asked the experts themselves: the members of the Facebook group Asphalt Life who help build our roadways every day.

By far the most popular option to keep workers safe in work zones was enlisting the help of police officers. Many said the presence of officers with their lights flashing caused drivers to slow down.

Last year, the New York State Police and the Department of Transportation launched “Operation Hardhat” as a joint initiative to crack down on work zone violations and highlight the importance of safe driving through active construction and maintenance work zones on state highways.

During this enforcement effort, drivers weren’t always made aware that troopers were present in the work zone, as many of them were dressed in construction safety vests and hard hats. During the sting, the three counties that participated in Operation Hard Hat issued over 350 tickets for various infractions including speeding, use of a cell phone while driving and failure to obey the flagger.

Workers say this helps: "I remember one year, I think it was back in 2008, we did a spot on the Interstate and we had to call into Iowa State patrol," Robert Cameron with Heartland Asphalt says. "They sent a guy out and he stood outside his car with the radar gun. He had a lineup of cars pulled over. That seemed to work pretty well."

Still, police can't be in every work zone and we know cellphones always are which leads us to the main cause for work zone related incidents: distraction.

According to government data, distracted driving was directly to blame for at least 500 of work zone deaths and who knows how many of the injuries. The latest AAA Foundation for Traffic Safety Culture Index survey found that about 84% of drivers report regularly seeing other drivers using a cellphone for texting while driving. In addition to seeing others do it, 44.9% of drivers surveyed said they themselves read a text message or email while driving and 34.6% of drivers typed or sent a text message or email while driving.

With the number of work zone deaths not decreasing year over year, it’s time we start to increase legislation and repercussions for those who violate cell phone bans while driving and look to ways to increase those bans through work zones.

Speeding is also an issue in work zones and crew members know slowing down drivers is another key to keeping them safe.

"Variable speed boards should be used [in work zones] and put a radar on there and ticket EVERYONE that goes over the work zone speed limit," Shannon Scott with The Shelly Company says.

States like Vermont, Illinois and Pennsylvania are trying that and are taking steps to increase fines for speeding in work zones and also looking at new technology that will help deter the reckless behavior.

The Automated Work Zone Speed Enforcement Program in Pennsylvania places vehicle-mounted cameras to detect and record motorists who are traveling at 11 miles per hour or more over the posted speed limit.

These violations will be recorded as civil penalties only, and no points will be assessed to driver's licenses. Beginning March 4, registered drivers started receive warning letters for the first offense, a violation notice and $75 fine for the second offense and another notice with a $150 fine for the third, and subsequent, offenses.

However, with over fifty-four percent of highway contractors reporting that motor vehicles had crashed into their construction work zones during the past year, the time is now to push for tougher restrictions for dangerous driving behavior in work zones.

Workers suggested that the ultimate way to keep crews safe was to completely close down the roadway during construction and work 24/7 to get it done as quickly as possible. In many cases that is not an option, but good traffic control always is.

Up to date signage, well-placed cones and barricades are paramount to worker safety. Unfortunately, traffic control setup can sometimes be an afterthought as work is typically being done under a tight deadline. Setting up traffic control equipment takes time and planning, and while pre-marking the work zone will increase efficiency, this is still a time-intensive task that workers should not rush through. Mistakes can put workers and drivers in high risk for injury or death.

These workers put their lives at risk every day to build and maintain the roads needed to get to their own jobs. All they are asking is for you to slow down, pay attention and let them work safely.

"I just beg you to slow down, put your phone DOWN and pay attention when you are in construction zones," Shaffer says. "Our lives depend on it and we want to go home too. My heart breaks for the families of the ones killed and injured and the children that don’t have a father now, may you rest in peace. Thank you God for letting me go home another day and please watch out for all my brothers and sisters!"

Please understand the lives at risk every time you enter a work zone. They deserve your full attention. Thank you.