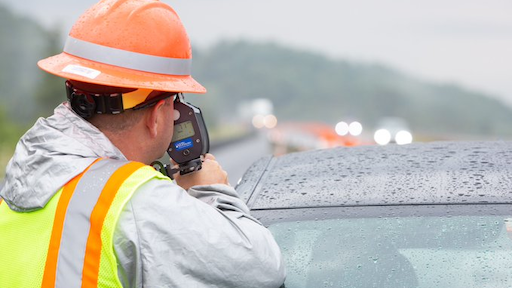 Construction and maintenance crews across the country work every day alongside fast-moving traffic, knowing their lives depend on drivers being alert, patient and cautious. However, as many workers will tell you, drivers are hardly ever all three of those things at once.

As a result, over 3,300 people — including an estimated 650 construction workers — have been killed nationally in work zone crashes over the past five years. Additionally, more than 35,000 people annually are injured at these work sites.

While many factors contribute to this increase in fatalities, experts point to distraction as the leading cause of work zone accidents and are trying to find ways to help deter distraction while driving.

Sure, several states have deployed handsfree laws and doubled fines for speeding in work zones — but do you want to know what gets my attention more than anything else while driving? A cop.

Maybe this is why many states are starting to increase the use of officers in active work zones to help curb  speeding and keep construction workers safe.

While New York’s Move Over Law requires workers to slow down and move over for construction (and even doubles fines for speeding in a work zone), the state felt those efforts hadn’t been enough to keep workers safe.

“The people who work on the roads are just that — people. With husbands, wives, children and parents who simply want to see them get home safely after work,” the New York State Department of Transportation said in a statement. “When you see our orange and yellow, we want you to slow down. Their lives depend on you.”

To help show drivers how important this is, the New York State Police and the Department of Transportation launched “Operation Hardhat” as a joint initiative to crack down on work zone violations and highlight the importance of safe driving through active construction and maintenance work zones on state highways.

During this sting, members of the New York State Police patrol actively patrol DOT work zones in various counties on various weeks to enforce work zone speed limits and ensure that motorists are obeying flagging personnel. Troopers are also on the lookout for motorists who violate the state’s Move Over Law, which applies to emergency and work vehicles.

During this enforcement effort, drivers weren’t always made aware that troopers were present in the work zone, as many of them were dressed in construction safety vests and hard hats. So far, three counties have participated in Operation Hard Hat — issuing over 350 tickets for various infractions including speeding, use of a cell phone while driving and failure to obey the flagger. More counties are expected to extend this type of initiative as well.

Why Aren’t More Officers Being Used?

As Operation Hard Hat proves, drivers tend not to pay attention in work zones when they aren’t aware cops are present. However, those flashing red and blue lights make drivers much more likely to obey the law.

The survey data also indicated that the majority of states use uniformed police officers in at least some work zones where there are particular traffic safety concerns; however, specific policies and procedures vary widely among the states.

Uniformed police officers are most commonly used in work zones with high speed, high traffic volume and where there are lane closures or nighttime operations unprotected by concrete barrier. Only a small number of agencies that responded say they utilize police officers on all highway work zones.

As an example, the Pennsylvania Department of Transportation hires flaggers for a salary that ranges from $15.28 and $18.31 an hour. By comparison, the starting salary for a state trooper is about $29 per hour. Still in 2017, the Pennsylvania Department of Transportation spent $4.9 million to pay state police to provide protection and enforcement at just 81 work zones.

In our eyes, ensuring safety is well worth the money, but we know project funding is a huge issue — even without this added expense on top of construction costs. Perhaps it’s time to add funds to construction bids that include the cost to use uniformed police officers in your work zone. Or maybe states should start a separate fund to pay for this service. Perhaps officers will even step up and volunteer their time to help. We believe one life saved is worth all the time and money spent.

ARTBA: 'Drivers, Work Zone Safety Is in Your Hands'