How do you make a pavement joint last longer? 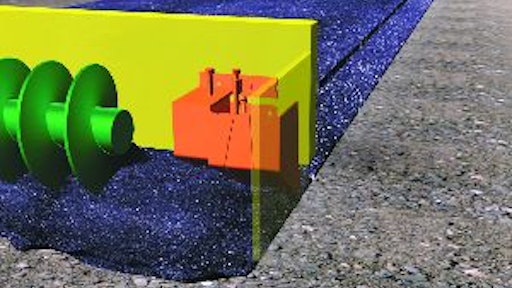 Using a device to apply the configuration will help increase the density of the joint region and give further integrity to the joint.

Over the years great attention was given to analyzing the effect of density, both on the main part of the mat and at the joint region. Mix designs have concentrated on maximizing the achievable density.

With regard to the rolling of asphalt, roller weight was maximized. Roller vibration was introduced in hopes of moving aggregate and nesting it in a more close packed geometry, hence increasing density. Vibration was also added to the paving machine in an attempt to increase initial density.

With all this attention given to density, the performance of the longitudinal joint did not appreciably improve. Looking at the actual joint geometry seemed a logical step.

Up to this time, the joint between lanes was essentially a vertical butt joint. When rolling the initial lane, the downward force of the roller translated into movement of the material horizontally. Even though tack material would be sprayed on the subsurface prior to the application, this would only tend to hold the bottom of the material.

Since movement was allowed, this translated into decreased density at the edge of the mat as compared to the center. When laying the adjacent lane, the first edge acted as a form so the new material had nowhere to go under the pressure of the roller.

Thus the density of the edge of the closing lane would tend to be greater. However, the total bulk density of the material across the joint was still substantially less than the adjacent area. Also, the performance of the joint relative to cracking, raveling and erosion remained the same.

Given the above, work was done on improving the density of vertical joints by producing a device which increased the amount of asphalt passing under the screed in a region 4 to 8 inches from the end gate. The additional volume of asphalt would result in increased density in that region. This initial increase was thought to be carried over the rolling process.

Testing confirmed that the joint region exhibited improved density and improved performance. The tests were performed on airport paving of taxiways and runways with thick mats. When tested on highways with thinner lifts, the results were not as dramatic and in some cases no improvement was noted. The debate over the effectiveness of the joint maker device continues and testing to confirm its claims is ongoing.

Another approach to the problem of longitudinal joint life and performance resulted in two significant joint configurations. The first was the Jersey Joint configuration. This was basically a taper of approximately a ratio of 1:12 lift to run.

Several benefits resulted. First, the ramp allowed for traffic transition from the unpaved lane to the paved one and back. This resulted in fewer transverse joints, since paving could continue in one direction without having to close the adjacent lane each day. Joint performance once closed appeared to improve. This was thought to be density related.

One major disadvantage was that the ramped edge tapered to less than a stone height. This caused an unraveling effect of the seam edge, resulting in failure of the joint. Subsequently, a new geometry called a Michigan Joint was developed.

This configuration had the same ramp effect, which allowed for traffic transition, but also featured a vertical notch of a predetermined height adjacent to the ramp. This notch allowed for seaming the two adjacent lanes without unraveling.

Using the Michigan Joint configuration promised improvement in the joint performance. When tested, the joint region did not exhibit increased density as was presumed; however, the joint did perform better and lasted longer.

The case for permeability

In the past, permeability has been synonymous with density. It is theorized that in fact these may be mutually independent things.

It?s believed that the decreased permeability is in fact due to the physical geometry. That is the notch and wedge form a scarf joint, which increases the distance water must travel to penetrate the joint and get to the subsurface.

Also, the fact that the ramp is not rolled when applied leaves the aggregate exposed. Therefore, when the adjacent lane is placed, the stones in the mix interlock, making the path for water infiltration more difficult. So, it?s permeability, not necessarily density, which gives the improved performance.

Consequently, in order to build a robust longitudinal joint, both permeability and density are important.

The recommended method for building a well performing, long lasting joint is to use the Michigan Joint configuration. This will increase the length of the joint cross section and reduce the permeability.