The construction practices used to build a durable joint cost no more than those used to construct a poor joint, so why not do it right? 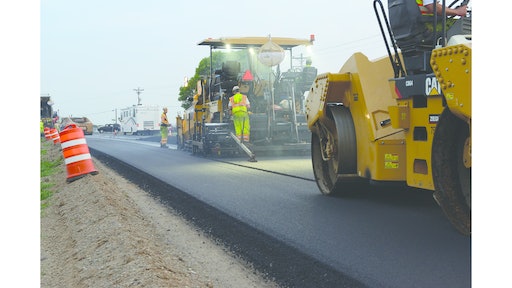 One of the most common failure modes of asphalt pavements occurs along the cold joint that is constructed between adjacent lanes of paving. All too often raveling occurs along the joint, most often on the side where the second lane was paved. This is usually a result of inadequate compaction of the longitudinal joint. Eventually, the bond becomes weak enough that aggregate begins to dislodge from the joint resulting in raveling and eventual failure of the pavement . There are several construction practices that can be employed to ensure a well-compacted longitudinal joint that will not fail prematurely.

Compaction of the unsupported edge of the first lane placed

As soon as the first lane is placed, the breakdown roller should make the first pass on the low side of the mat with the steel drum overhanging about 6 in. The second pass should be made on the opposite side of the mat, again overhanging the steel drum about 6 in. This technique of overhanging eliminates transverse shear loading near the edge of the mat and forces the mix vertically downward instead of pushing it sideways and out. Poor joint compaction is often due to insufficient material depth at the joint. Dense graded HMA mixes typically compact with a 25% roll down, or ¼ in. per 1 in. This means to achieve a 2 in. compacted lift, typically the mix must
come out of the paver screed at 2 ½ in. This method allows the material right at the joint to be confined on both sides prior to rolling. By confining both sides, the full weight of the roller will force the mix down into the joint to achieve the best density available.

Overlap of mix from second lane paved onto the first lane

The second practice to constructing a durable longitudinal joint is the overlap of mix from the second lane onto the first lane. There are two things to know in this situation. First, when the loose mix from lane 2 is placed over top of the compacted mix of lane 1, the mix should be high by the amount of compaction that will occur. Dense-graded mixes will compact approximately ¼” per inch of mix laid. In other words, for every one inch of desired mat thickness after compaction, approximately 1-1/4” of loose mix should be placed behind the paver. If a two-inch final lift thickness is desired, 2-1/2” of loose mix should be placed behind the paver. This “fluff factor”, as it is often called, will vary slightly depending on the mix being used and the thickness of the lift being placed. After a few truckloads, the paving crew will be able to fine-tune the fluff factor to place the exact amount of loose mix that will result in the desired mat thickness after compaction.
The second consideration is the amount of overlap of the second lane placed onto the first lane. If too much overlap occurs, the excess mix will have to be raked away from the joint. If not enough mix is placed at the joint; a depression or invert will occur on the lane 2 side of the joint and collect water when it rains. In general, the amount of overlap required is in the range of 1 to 1-1/2” when using a ¾” inch mix down to as little as ¼” of overlap when using a half-inch mix. With careful attention to the amount of overlap, little or no raking of the mix at the joint is necessary.

Raking at the longitudinal joint

If the proper amount of overlap is placed at the longitudinal joint, no raking is necessary. Some raking may be required when a ¾ in.mix is used and the lift thickness is less than 4 inches. In this case, only the coarse aggregate sitting on lane 1 that could be crushed by the rollers should be raked away from the joint and properly disposed of off the roadway. Excess mix at the joint should not be broadcast back onto the surface of lane 2. When mix is broadcast back onto the mat, the coarse aggregate gets rolled into the surface without any fines surrounding it. Water will collect around the coarse aggregate, seep into the pavement and enable the onset of raveling. Also, when mix is raked away from the joint, there is not enough mix remaining at the joint to achieve maximum density after the rollers compress it. Finally, the joint should not be raked flat. Since the new mix being placed must be ¼ in. per inch high, raking flat will leave no mix to be compacted since it will already be at the same elevation as the compacted mix in lane 1 before the rollers pass over it.

The final aspect to constructing a durable longitudinal joint is the rolling pattern used. Historically, pinching the joint from the lane 1, or cold side of the joint was common practice. Research has shown that this results in lower compaction at the joint and is also inefficient from a production standpoint. When pinching from the cold side, the roller cannot be operated in vibratory mode and the majority of the hot mat is losing temperature as the roller pinches the joint. The recommended practice for compacting the longitudinal joint is to roll with the steel drum almost entirely on the hot mat, overlapping onto the cold mat by about 6 inches. Using this procedure is much more efficient as the entire width of the steel drum is being utilized in vibratory mode while the mix is still hot.

Don’t we already know how to build an L-Joint? Apparently not when our roads are breaking apart at the seams every day.

A seminar conducted by the Asphalt Institute and the FHWA discussed some recommendations for specifying and construction of these HMA longitudinal joints. Some of their best practices are below: