Tips and examples to help you apply the perfect tack coat 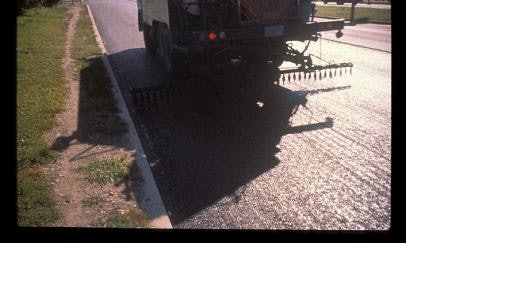 In “How a Tack Coat Improves Your Paving” in our May 2014 issue, Jim Scherocman detailed how the proper, uniform application of the asphalt tack coat contributes significantly to the long term durability of the new hot mix asphalt pavement layers. And in our August/September 2014 issue he clearly explained “How to Apply a Tack Coat.” In this the third and final installment of his tack coat series he examines common tack coat problems and explains how to prevent them from happening – or how to fix them when they do occur.

Compare the application rate in the above figure to the application rate of the tack coat shown in Figures 2 and 3. These pictures depict two examples of improper and non-uniform tack coat application. In Figure 2, it is clear that several of the nozzles on the distributor spray bar are blocked. It is also clear that the nozzles on the spray bar are set at an incorrect angle and that at least 90% coverage of the pavement surface has not been achieved.

In Figure 3, a number of nozzles are blocked, some are set at the wrong angle, and the tack coat spray application is anything but uniform across the width of the pavement. It will be impossible to achieve a proper bond between the new asphalt pavement layer and the existing pavement layer given the poor quality of the tack coat application shown in this picture.

Figure 4 shows the excessive tack coat application to an existing PCC pavement surface. This amount of tack coat will merely create a slip plane between the concrete pavement surface and the new HMA layer and should be avoided at all times.

If asphalt binder or polymer modified asphalt binder is used as a tack coat, there is no break time involved. When the asphalt binder is applied to the pavement surface, it will cool to ambient temperature, usually within a couple of minutes. Once that has occurred, the new hot mix asphalt can be placed on top of the tack coat.

Before the emulsion breaks, the tack coat can normally be driven on by the haul trucks or with the paver wheels or tracks with minimum pick-up of the emulsified material. This is because the emulsion is still very liquid and not yet sticky. There is generally no problem with placing asphalt concrete mix over an unbroken emulsion. The amount of water in the emulsion, even a diluted emulsion, is minimal and will not affect the bond of the new layer to the existing pavement surface.

For more than twenty years in some parts of Europe, a separate distributor has not been used to apply the tack coat. An emulsion tank is placed on the paver and the spray bar is located about one foot in front of the head of HMA material in front of the paver screed. Because of the spray bar location, there is no time for the emulsion to break before the new hot mix asphalt is deposited on top of it. Also due to the location of the spray bar, no vehicle tires or paver wheels or tracks come in contact with the tack coat material and pick up the tack coat. In Europe there have been no problems with this method of paving over the unbroken tack coat material.

The spray paver, as it is commonly termed, has been available for use in the United States for several years. Application of the tack coat material, directly in front of the head of material on the augers and the screed on the paver, means that the emulsion will not have time to break prior to the asphalt concrete mix being placed on top of it. The heat of the mix will cause the emulsion to break. The minimal amount of water in an undiluted emulsion will be flashed off and turned into a minimal amount of steam. The proper bond between the underlying pavement layer and the new pavement surface will be achieved and no haul trucks or traffic will be able to run through the tack coat.

As discussed above, if a pure asphalt binder is used as a tack coat material, there is no break time involved with the material. Once the material cools to the same temperature as the existing pavement surface – a matter of minutes – it is ready to have the HMA mix placed on it.

As also discussed above, when an asphalt emulsion breaks, the asphalt binder particles have separated from the water. Once the water completely evaporates, the emulsion has “set.” Once the emulsion has set, it is ready to have the HMA mix placed on it. Depending on the application rate of the emulsion, the dilution rate, and the environmental conditions, it might take as little as 15 minutes for the emulsion to set or as long as two hours for that to occur.

Between the tack coat emulsion break time and set time, the tack coat is very sticky and will adhere to the haul truck’s tires and be carried off of the existing pavement surface. This situation obviously defeats the purpose of applying the tack coat in the first place. Figure 6 shows two examples where tack coat has been removed from in front of the paver by the tires of the haul vehicles.

[Figure 6: Pick-up of the Tack Coat on the Tires of the Haul Trucks]

[Figure 7:    Pick-up of the Tack Coat on the Tires of the Haul Trucks]

Depending on the factors described above, the delay obtaining the set time for the emulsion can significantly delay the placement of the asphalt concrete mix. If HMA placement is not delayed, the tack coat will be removed from the existing pavement surface by the tires of the haul trucks and the tack coat obviously will be completely ineffective in creating the necessary bond between the new and old HMA layers. In addition, if the tack coat material is picked up on the tires of the haul trucks, it can be deposited on adjacent pavement surfaces.

The pick-up problem can be significantly reduced by using the following techniques: (1) minimizing the tack coat residual rate; (2) assuring uniform tack coat application across the pavement width by using the proper nozzle size, nozzle angle and spray bar height; (3) using an asphalt binder for the tack coat; and (4) applying the tack coat as far ahead of the paver as feasible (depending on traffic safety requirements).

The main purpose of a tack coat is to provide a bond between the existing pavement surface and a new layer of hot mix asphalt and to reduce the possibility of a sliding failure between the new and old pavement layers. To accomplish these purposes, however, it is not necessary for the tack coat material to completely cover the underlying pavement surface. Only 90% to 95% of the area needs to be covered to achieve adequate bond. In addition, both too little tack coat as well as too much tack coat is detrimental to the long-term performance of the HMA pavement structure.

The residual amount of asphalt binder, not the application rate, is of primary importance for a tack coat. The residual asphalt content should be based on the type and condition of the existing pavement surface, the type of terrain where the pavement is located and the existing environmental conditions. The application rate for the tack coat will also depend on the type of material used – asphalt emulsion or asphalt binder – and whether the asphalt emulsion is diluted.

The asphalt distributor must apply the tack coat material uniformly to the existing pavement surface. The spraying temperature of the material must be proper for the type of asphalt material being used. In addition, the proper nozzle size should be used, the angle of all the nozzles must be about 30 degrees to the axis of the spray bar, and the height of the spray bar above the pavement surface should provide for a double or triple lap of the fans from the nozzles. Finally, all of the nozzles should be open and functioning properly.

James A. Scherocman, P.E., is a consulting engineer who, in addition to being a regular presenter at educational conferences such as National Pavement Expo, can often be found arbitrating project conflicts between contractors and public agencies. He can be reached at 11205 Brookbridge Drive, Cincinnati, Ohio 45249 or at jim@scherocman.com.

The Rebuilding American Infrastructure with Sustainability and Equity, or RAISE Discretionary Grant program, announced that $1 billion in funding is available for grants to support infrastructure projects.
Jessica Lombardo
April 15, 2021