Stimulus Funds Put to Good Use on Tulsa's Loop

Manhattan Road and Bridge gets an unexpected partner in the single-largest project awarded in the Oklahoma Department of Transportation's history. 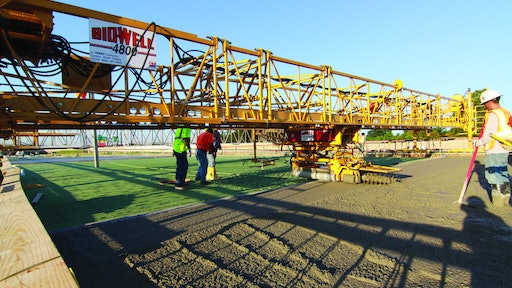 The nearly completed work on the Tulsa Inner Dispersal Loop (IDL) around downtown is a prime example of the substantial progress that can be accomplished with an infusion of cash to the states. The IDL, which carries 62,000 motorists daily, is the largest single project in the history of the Oklahoma Department of Transportation (ODOT) and largest stimulus-funded project in the U.S. at the time of its letting.

"Ninety-five percent of this project is stimulus funded," says Travis Smith, resident manager - Tulsa Residency for ODOT. "This project was expedited by at least five years on the plan, and we never would have been able to let this as a single project without the stimulus money."

Initiated in June of 2009, the $75 million project encompasses reconstruction of all lanes of the west and north loop segments of Interstate 244 around downtown Tulsa and some surface repair to the other loop segments. "It was an A plus B contract, where we bid a base (A) of approximately $67.6 million and then bid $15,000 a day (B) for the 540-day contract," explains Wesley Seabolt, project executive for Manhattan Road & Bridge, Tulsa, OK.

Even with Manhattan Road and Bridge's 50-plus years of experience building bridges from Oklahoma to Louisiana, a project this size called for a 60/40% joint venture with Sherwood Construction Co., Wichita, KS. Manhattan Road and Bridge is responsible for nearly 80% of the project's bridgework. Sherwood is handling the surveying, grading and removal and repaving of the IDL's roadways, as well as the remainder of the bridgework.

The most critical work for the IDL centered on bridge reconstruction and paving. The north and west segments include 44 bridges that require significant repair. "A majority of the bridges are rated as structurally deficient," comments Smith.

According to Reed Wood, general superintendent for Manhattan Road & Bridge, "Every bridge required removal of the deck to the top of the beams, and we fixed some of the substructure on those in worse condition."

The contract included two 200-day milestones for bridgework completion, with a $20,000 per-day disincentive for missing the deadlines. With so much riding on the bridgework, everything from material delivery to paver length and options had to be meticulously planned.

The designs presented multiple challenges for the crews and bridge pavers. Several of the decks transitioned from a left slope to a crown to a right slope. Others had a continuous span that had to be poured by skipping segments so as to not overload the deck beams. Fifteen of the decks flared out from one end to the other more than 15 ft.

"One deck measured 16 ft. wider from one end to the other, and the total bridge length was only 150 ft.," recalls Wood.

Nearly half of the bridges were designed at a skew angle, which required machine length to be significantly wider than bridge width at square, so the paver can pave the crown at the skew angle to get the proper finish. With some of the skew angles as high as 50 degrees, Manhattan Road and Bridge purchased a skew bar kit. "The kit offsets the paving carriage, so it hits the same crown points on the deck from the front to the rear of the machine," explains Larry Eben, southeast area manager for Terex Bid-Well.

With bridge widths and skew angles dictating machine widths ranging from 36 to 120 ft., Eben recommended the Terex Bid-Well 4800 paver for the project. With its 48-in. truss depth, the paver is capable of paving widths from 36 to 172 ft. without deflection. The 18-ft. end segments of the 4800 offer up to 15-ft. of leg travel to each side to handle bridge width flares. The new paver also complements the three other Terex Bid-Well pavers working on the project.

Bridgework Phase 1, completed on schedule in May 2010, saw Manhattan Road and Bridge's crews finishing 20 bridges on the westbound section of the north loop segment and southbound lanes of the west segment. These lanes are now open while the northbound and eastbound lanes of the west and north segments respectively are being reconstructed.

Manhattan Road and Bridge is using a 4,000-psi concrete to pour the 8-in. deck thicknesses. The mix has a 3-in. slump, but the producer is using a water-reducing agent to increase slump to 5 to 7 in., since it is being pumped to the deck from ground level.

Manhattan is paving some of the more complex bridge designs during Phase II of the project. In August, crews completed a series of pours on Bridge 52, a long continuous-span bridge that flares from 53 to 65 ft. end to end. From south to north, the deck also twists from a 3.2% left slope to being flat with a crown at the center to a 6.2% right slope. Due to bridge design, crews first poured the center section and skipped sequence pours to maintain proper beam loads.

At the time, beating the heat seemed to be the biggest obstacle for the paving crews. Multiple segments of this bridge were poured during a time where daytime temperatures reached 105° F and nighttime readings only retreated to the 80s.

"We must keep the concrete below 90° F, so we poured in the early morning hours and ended by 9 a.m.," recalls Wood.

To aid in maintaining a lower temperature, Manhattan Road and Bridge equipped the Terex Bid-Well 4800 paver with an optional fogging system. Attaching to the finish pans, this system produces a true light fog to aid in finishing the concrete.

Bridge 53 also challenged the expertise of the paving crew. At 1,050 ft. long, bridge paving began with a flat grade and 2-ft. crown. At a distance of only 300 ft. from the header, this crown expanded to almost a lane width. "I recommended that we add a longitudinal joint from the abutment to Pier 2 as a solution," says Eben. From Pier 2 to the opposite end, paving crews had to narrow the paver from a 63-ft. width down to 51 ft.

Yet even with all the bridge design intricacies, Manhattan Road and Bridge has continued to rise to the challenge and pour extremely smooth decks, while remaining on target to beat the contract deadline and receive full bonus. "We have received many positive comments regarding how smooth the decks are and the new 4800 does an outstanding job helping us achieve that smoothness," says Wood.