Taking off in Northern Minnesota 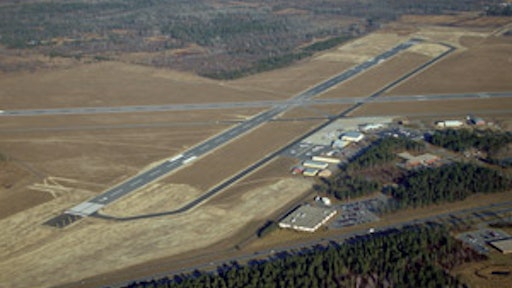 There are challenges unique to any paving jobsite, but airports are considerably different than highway or commercial paving. From an increased level of jobsite security, to the type of traffic involved and the type of asphalt used, almost everything about an airport paving job is different than conventional asphalt jobs.

With a population of 11,000, Bemidji, MN may not seem to be a likely home for the state's fourth-busiest airport. Due to its location in north-central Minnesota, the Bemidji Regional Airport is an important element of the state's infrastructure, with 30,000 flights each year.

The Bemidji Regional Airport has two runways, and in order to maintain the airport, cross runway 7-25 was rebuilt by Northstar Materials, Inc. Runway 7-25 is 150 feet wide and 6,500 feet long. The project also included rebuilding a 50-foot-wide taxiway for a total of 31,000 tons of asphalt used to complete the job.

Before any work began, Northstar Materials sought advice. The company asked Rich Walters, paving director of the Minnesota Asphalt Paving Association, to meet with company personnel for training on airport specifications and construction processes to prepare for the project.

Safety first
The runway reconstruction required conducting airport safety meetings each morning, with every truck driver, equipment operator and any other personnel who would be on the jobsite that day required to attend. Since the leaders of these meetings had to be certified, Northstar Materials had five employees attend a train-the-trainer session at the Bemidji Regional Airport to become certified to lead the daily safety meetings.

The first phase of the project involved dealing with the existing runway surface. The specification for the new runway base called for the old runway to be reclaimed with a concrete and emulsion stabilizer. The reclaimed runway and the concrete and emulsion stabilizer prevented the need for any additional base material and thicker lifts of hot mix asphalt on the wear surface.

Because of the unique nature of the base construction, Northstar Materials chose not to do the work and had to subcontract that portion of the project. "I had never seen anything like this before and to my knowledge, it's the first time it had ever been done in Minnesota," says Jeremy Ganske, asphalt and aggregate operation manager for Northstar Materials.

Old runway reclaimed
The existing runway was reclaimed 10 inches deep. Then, Portland cement was spread over the reclaimed runway. The runway was reclaimed a second time, during which asphalt was injected into the material. "It is almost like concrete when finished, because it is a hard and smooth surface," says Ganske.

With the base material ready, laying asphalt began. The job specification called for P-401, a Superpave used at airports. P-401 is a high level of Superpave that comes with its own set of Federal Aviation Administration specifications.

"What distinguishes P-401 from other Superpave asphalts is the percent within limits (PWL) specifications," says Ganske. "What this means is that contractors are not only required to meet requirements, but to stay consistent within certain limits." The consistency is set during paving of a test strip. Once the consistency is set, any deviation results in a penalty.

"PWL makes for a much smaller margin of error in paving," says Ganske. Because of this, Northstar Materials checked the base and the asphalt on a test strip to ensure everything worked according to plan.

During testing, Northstar Materials decided the best way to compact the mat. "With compaction, each project is unique, so we go through a process to establish what we have to do to get compaction," says Ganske. "Each mix compacts a little differently. We'll determine a pattern that works and then try to consistently stay with that pattern while continuously monitoring the results."

Northstar Materials used part of the taxiway that was being reconstructed as the project test strip, laying 300 tons of asphalt. When the compactors started working on the test mat with vibration, the contractor discovered that the Portland cement powder rose to the top of the base. "The powder was making a barrier that was causing the asphalt to slip during compaction," says Ganske. "We decided to spray prime coat down to make the asphalt adhere to the base, and that solved the problem."

With the right equipment, the compactor operators keep a close eye on ambient conditions during paving. "With a mix as touchy as this, if the weather changes, we usually have to change rolling patterns. If it cools down or if the sun goes behind the clouds, all those things affect the rolling patterns," says Ganske.

Paving the runway took two weeks. Northstar Materials was paving 75 feet wide and 3,000 feet long. An Ingersoll Rand PF-5510 paver laid the asphalt. "We paved 225 tons an hour," says Ganske. "That's good for an airport job. It's not as much as we do on a highway, but the consistency on an airport job is so much higher because of the PWL that it takes more time to lay down the asphalt."

A unique safety concern on the job was the cross runway that remained open to air traffic. Northstar Materials had to stay 250 feet clear of the operating runway at all times. A member of the crew had an airport radio for communication with air traffic control.

Because the other runway needed to remain open, the Bemidji Regional Airport originally wanted work on the runway reconstruction to take place at night. "We were able to work closely with the airport schedule to complete paving during the day," says Ganske. "If there were four hours between planes, we adjusted our schedule and worked on other things to stay away from the open runway."

Security was also a factor. Trucks entered through two gates at the airport. "The engineer posted one person at each gate to verify the trucks," says Ganske. "We had to provide airport security with a list of people who were going to be on the project each day."

Northstar Materials is based in Bemidji. The company is a subsidiary of Knife River Corporation and lays 900,000 tons of asphalt each year, working in northern Minnesota and North Dakota. During the peak of the paving season, Northstar Materials employs 280 people. Ninety percent of the company's asphalt work involves highway construction, with the remaining 10 percent is commercial and municipal work.

The entire runway reconstruction, including grading, base work, electrical and paving, took four months. One of Minnesota's most important airports now has a rebuilt runway that will serve the public for years to come.