The reprofiling and repaving of Lowe's Motor Speedway. 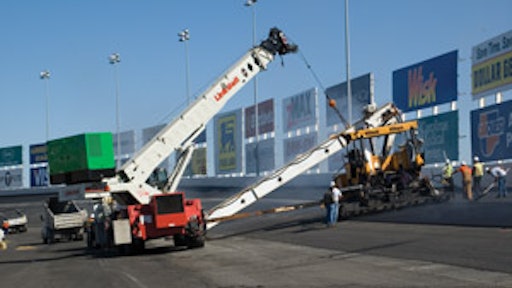 Using state-of-the-art techniques, the Sunmount Corp. of Roanoke, TX, an industry leader in resurfacing high-speed, high-banked automotive racetracks, put down the smoothest, most dense racing surface possible during the reprofiling and repaving of Lowe's Motor Speedway in Charlotte, NC.

Work on Lowe's Motor Speedway is a $3.5-million dollar project.

"We are remolding this track to take some of the meanness out of it," says H.A. Wheeler, president and general manager of Lowe's Motor Speedway. "This is one of the toughest tracks on the NASCAR® Nextel Cup circuit because it can bite drivers when they least expect it. Although we've had a few exceptions over the years, rookies don't normally do well here because the track is difficult. Even a few seasoned veterans have never really gotten the hang of the track."

There are a number of factors that make a professional automotive racetrack difficult for drivers. How rough the racing surface is, the difficulty of the entry and exit points in the turns, the degree of banking, a driver's ability to look ahead and spot where the racing groove narrows all contribute to a "mean" racetrack.

"We are modifying the racetrack by changing the profile of the turns, smoothing them out and making the radii more consistent," Wheeler says. "This will make the track more predictable."

The current resurfacing of Lowe's Motor Speedway marks the third time the entire 1.5-mile oval has been repaved since the track opened in 1960. The first new layer of asphalt was applied in 1973, and the most recent repaving came prior to the 1994 season. In between, the track's corners received fresh coats of asphalt in 1979 and 1987. Officials estimate the resurfacing project will require 25,000 to 30,000 man hours for design, surveying, safety barrier removal and reinstallation, track milling, repairs to the concrete retaining walls and paving.

The paving challenge
Repaving of the racing surface is done in two layers using a special polymer in the asphalt mix. The first layer is two inches deep and the final wearing surface layer of asphalt is 1.5 inches thick. For paving, the width of the track is divided into three rings, with two sections measuring 14 feet and one section measuring 17 feet.

To ensure a smooth racing surface, engineers use a three-dimensional digital surveying technique, a technology not available when the track was first built in 1960 or last repaved in 1994. To achieve better smoothness and density, Sunmount paves and compacts each ring continuously without interruption. Mechanical supervisor Danny James devised specialized equipment to put down the best possible riding surface to match the engineering.

Because of the high-banked slopes of the racetrack, asphalt delivery to the Titan 535 hopper requires "outside-the-box" thinking, ingenuity and assembly. Dump trucks deliver the special polymer asphalt mix into the hopper of a material transfer vehicle. The asphalt is remixed in the material transfer vehicle to reduce thermal and material segregation. Then, the asphalt feeds into a small hopper of a variably angled 49-foot long chain conveyor system.

Working into the night is made easier because Sunmount Corporation is able to use the track's lighting normally used for evening NASCAR races.

An 80-ton, rubber-tire, hydraulic rough-terrain crane, outfitted with 6,000 pounds of additional side-addled concrete counterweights and a strong arm balances the load by supporting the bottom and top of the conveyor. The stiff arm also supports the paver from moving down the slope. Additional counterweights are on the outside, or higher section, of the front and rear of the paver track. This gives the paver more stability on the incline. The conveyor feeds the asphalt directly into the hopper.

One of the features of the Titan paver is the double-bar tamping system. This enables the paver to achieve a higher initial mat density directly from the screed. Sunmount's quality control nuclear test results indicate mat density behind the paver screed of 91 percent. The contract specifies 94 percent density.

The remainder of the compaction density is achieved through conventional compactor working in a non-conventional mode. Two compactors are linked together by a strong stiff arm. One pneumatic tire compactor circles the track on the flat bottom side of the track, supporting the second compactor circling on the upper high-banked ring.

Another factor in the Sunmount effort to achieve maximum smoothness on the 7,920-foot-long track is that only non-destructive nuclear testing is permitted during paving. The inspection is done at 400-foot intervals with a Troxler nuclear density gauge. Physical coring and extracting samples from the race track's new surface is prohibited because even the slightest irregularity in the surface could be an impediment to the cars traveling in excess of 200 miles per hour over certain sections.

"With the Ingersoll Rand Titan 525 paver, and some of the other equipment we have modified or manufactured, we have taken the paving of high-speed, high-banked automotive racetracks to the next level," says James. With the new racing surface, drivers will have improved conditions on the track in their quest to pass the checkered flag first.