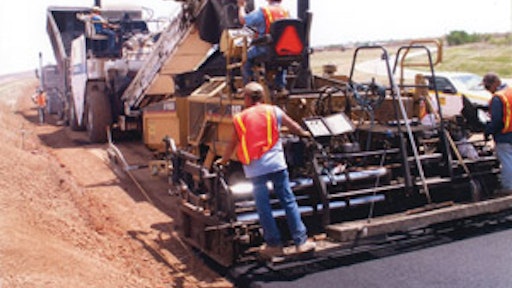 While the concept of a full-depth Perpetual Pavement is nothing new for the state of Oklahoma, Haskell Lemon Construction completed the first officially-let Perpetual Pavement project and the Oklahoma Department of Transportation is confident this structure will deliver the same reliable performance as many of its other 40-year-old full-depth hot mix asphalt (HMA) roads have with minimal surface maintenance.

There are heavily-traveled full-depth asphalt arterials running through the heart of Oklahoma City that have performed for past 40 years with minimal maintenance. With an occasional new overlay, these "Perpetual Pavements" continue to support average daily traffic (ADT) levels of well over 100,000 vehicles, with a third of the volume being heavy trucks. The asphalt base on these vital roads was originally placed in the late '60s, and planned milling and resurfacing has kept them in good service ever since. For ODOT and Oklahoma taxpayers, maintaining and extending the service life of these long-lasting, full-depth asphalt pavements has been a very cost-effective investment that has produced minimal disruption to the traveling public.

Official Perpetual Pavement
The State Highway 152 project, the fourth and final section of new highway to connect Oklahoma City with Mustang, OK southwest of the city, was a 2.2-mile stretch of divided four-lane road from just west of MacArthur Boulevard to Council Road.

Haskell Lemon Construction, a third-generation family-owned company started in the 1940s by Haskell and Irene Lemon, was awarded a $100,000 bonus for exceptionally smooth construction.

From the Rich Bottom Lift to the Stone Matrix Asphalt surface course, each mix was produced at the company's West Plant located three miles north of the project.

"Because it was a new road we were fortunate to perform all the work required during the day," notes Larry Lemon, chairman of Haskell Lemon Construction.

Pavement construction
Following the subgrade fly ash stabilization, which was completed to a depth of eight inches using a Terex RS500 stabilizer, the contractor began placing a three-inch lift of "rich" base course. While a normal Superpave mix may contain approximately 4.7 percent liquid asphalt binder, the Rich Bottom Lift (RBL) for this project contained 5.7 percent AC to seal the subgrade and provide the flexibility for a long-lasting Perpetual Pavement.

"We followed the national standards for a RBL mix, using 5/8-inch stone and a PG 64-22 binder," Lemon says. "We placed approximately 19,000 tons of the RBL mix across the entire road structure (two 12-foot wide travel lanes, plus the 4-foot wide inside shoulder and 10-foot wide outside shoulder) to seal out the moisture from the underlying subbase and to provide a highly flexible structure for the subsequent lifts to be placed."

On top of the RBL course, two three-inch lifts of S3 Superpave base course (1-inch aggregate) with a PG 64-22 binder were placed, followed by a three-inch binder lift of S3 Superpave with a PG 76-28 polymer modified binder. The contractor's paving crew finally capped the project's travel lanes with a two-inch lift of polymer-modified Stone Matrix Asphalt (SMA) designed with a 5/8-inch aggregate and PG 76-28 binder. On the shoulders, crews placed a S4 Superpave with a PG 64-22 binder.

All the mix placed on the project was produced with the company's CMI 400-tph drum mix plant, which had to add a Terex mineral filler silo to accommodate the SMA design specifications. The paving crew used a Roadtec Shuttle Buggy material transfer vehicle and Caterpillar AP-1055B paver to place the various lifts, and an Ingersoll Rand DD130 high-frequency vibratory roller to achieve density.

"This was the first SMA project built in the Oklahoma and the first official Perpetual Pavement, but the state has been building full-depth HMAs for a long time and with great success," Lemon says.

The Oklahoma Asphalt Pavement Association recognized the quality of construction in 2006 by awarding Haskell Lemon Construction top honors in the Full Depth category. The pavement construction was judge on its longitudinal and transverse joint construction, as well as its ride smoothness quality. Seven full-depth HMA projects were submitted for the competition.

Quality Control
Quality Control/Quality Assurance (QC/QA) for the project was directed by ODOT, with Haskell Lemon providing verification. Samples of mix produced at the contractor's plant were tested in 4,000-ton lots and 1,000-ton sub lots.

Jay Lemon, vice president of construction for Haskell Lemon, says on projects like Highway 152 the DOT does its own QA testing and requires contractors with certified personnel to perform additional redundant testing to verify results.

"Samples are pulled from the plant for extraction, gradation, air voids and Rice specific testing," Lemon says. "During the (Hwy. 152) project, ODOT would pull a sample for testing once every four samples we pulled in order to validate the results we provided. ODOT specifies the range of test lots we need to conduct and assigns disincentives to gradation, air voids, QC content and road density factors. We executed the project with minimal deviations to the required specifications outlined in the contract."

"We're able to meet the specifications and deliver the quality expected because we invest in the technology and people required to execute this type of project," the senior Lemon notes. "We specialize in surfacing and 60 percent of the surfacing work we do is with asphalt, so it's important for us to make the investments we need to make to be a competitive leader in the market. And it's the investments we continue to make that allow us to deliver a project like Highway 152, which is a great value to the taxpayers of Oklahoma and one that will serve them well for many decades to come."

And when you consider Oklahoma's other long-lasting full-depth Perpetual Pavements, the newest addition should do well in matching the performance characteristics of its veteran counterparts.