In The Spirit Of Commerce 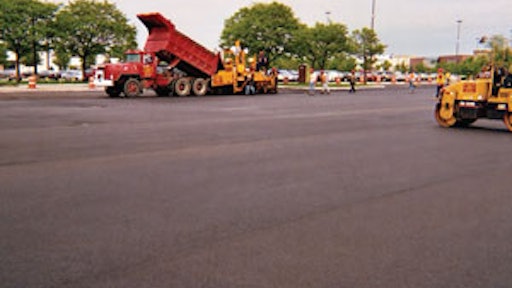 Americans love to shop, but they are also easily irritated by inconvenience. English Paving Co. of Ridgefield, NJ, had to keep these two ideas in mind when working on a parking lot and road reconstruction project at Willowbrook Mall in Wayne, N.J. The company needed to complete the job in four days-starting on a Monday and ending on a Thursday-as to not interfere with the weekend traffic at the mall. A subcontactor striped on the fifth day. The 32,000-square-yard (288,000-square-foot) project required careful planning and round-the-clock commitment from the English Paving crews. The National Asphalt Pavement Association honored English Paving with a 2004 Quality in Construction Award for their work at the mall.

If you've ever been to a large mall, you can image the challenges a paving operation faces when working in such an environment. English Paving paved the mall's interior roads at night as to not disturb the flow of traffic during the mall's business hours. During the day, they worked around the constant presence of shoppers and traffic. The English Paving crews blocked off sections of the parking lots where they were working, but even construction drums, flagged roping, and heavy equipment didn't always keep people away.

"The parking lot is in front of Macy's and there was always a lot of traffic coming through the mall while we were working," says Drew Lillis, project manager at English Paving. "People will park where they want, or try to take the shortest path from their car to the mall entrance, so we had pedestrians cutting through the lots where we were working all the time, even though we had barrels and barricades to try to stop them. Our guys on rollers or other machines always had to watch out behind them for pedestrians. We also had someone at the entrance where our trucks were coming in that would let our guys in but keep public vehicle traffic out of those areas."

English Paving dedicated much of the first two days on the job to milling. The crews used a Terex 800 for the milling, pulling up an average of two inches across the roads and the parking lot. The crews took the milled material to the asphalt plant that supplies English Paving its HMA.

English Paving had a base repair crew on site for box out repairs. Immediately after an area was milled and swept, an engineer conducted a proof roll using a loaded tandem dump truck to identify the areas that needed repair. About 1,000 square yards (9,000 square feet) of area required base repair work.

English Paving was required to pave the interior roads at night, which happened the night of the second day on the job. The roadway involved base repair, a 4-inch asphalt base course, and the 2-inch surface course. Approximately 600 tons of asphalt was installed with the roadway work. The crews milled, performed base repair, and installed the final pavement in the same nighttime period.

"We were in charge of taking over a section of road, shutting down the roadway, and creating the detour," Lillis says. "The detour involved travel onto highways and local official notification. After paving, there was temporary striping applied as needed."

Wednesday evening, after the milling and base repair work, English Paving moved on to the next step of the process-fabric installation was specified for the job.

"Willowbrook Mall is built in a swampy area, and I think they wanted that extra support from the paving fabric to keep any reflective cracking from coming through," Lillis says.

The process of laying paving fabric involves spraying hot asphalt cement with a tack truck. "[This is] followed immediately with a tractor outfitted with an implement which holds the rolls of fabric," explains Lillis. "The implement contains numerous brushes to press the fabric into the tack coat and hand brooms are used at the beginning and ends of the runs."

"If too little tack is applied, the fabric will not adhere to the surface or allow enough bleed through to hold the asphalt surface course. Too much will cause excess bleeding through the fabric and may show through the surface," Lillis explains. "The computerized application allows the truck to be operated at various speeds depending on the size of the area and configuration of the paving areas."

On the morning of English Paving's fourth day on the job, they began paving the parking lot area using a Blaw Knox 5510 paver. The parking lot area used 500 tons of asphalt for the half-inch to three-quarters-inch leveling course and over 14,000 tons for the two-inch surface course. The paver was equipped with an Omni III screed with Blaw-Kontrol and an Ultra 5 Joint Matcher.

"The joint matcher operated by sonar. It measured their distance from the reference point to the existing mat placed and ensured the run being placed was at the same elevation, thereby lessening the chance of uneven surfaces between runs. The joint matcher also eliminates the need for a screed man constantly working on the screed," Lillis says.

English Paving used three rollers on the parking lot. The system was worth the effort since English Paving accomplished a more than 94% density rating on the finished job.

The crews used a CAT 634 for the initial breakdown rolling immediately after the paver and took two or three passes over the surface. Then they employed a CAT 434 to make three passes over the mat to gain compaction and remove any heavy roller marks. Finally they brought out a CAT 334 for small areas and to remove all other roller marks. Lillis says the rollers were generally on separate paving lanes approximately 30 to 40 minutes apart.

Coordination, scheduling, and cooperation from Mother Nature allowed English Paving to deliver the Willowbrook Mall parking lot job on time. Skilled crews and state-of-the-art equipment contributed to the excellent results of the project, including no visible joints, superior compaction, no segregation, positive drainage, and high density.