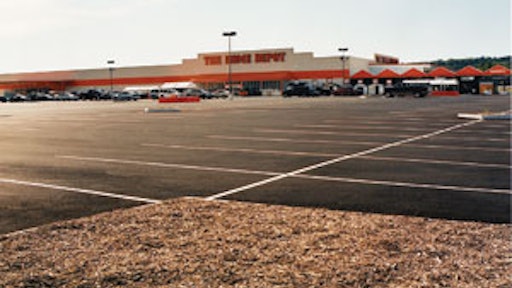 Sometimes jobs just go well. Everything falls into place, the various contractors have good working relationships, and the end product turns out looking spectacular. That's the kind of job Tilcon New York Inc. experienced on its work at a Home Depot in Newton, NJ. Tilcon's workmanship earned it a 2003 Quality in Construction Award from the National Asphalt Pavement Association.

Home Depot, like many other retail stores, demands an aggressive construction schedule when establishing a new site. Contractors were given nine months to turn an unimproved lot into an attractive store, ready to entice the populace into buying home improvement wares. As the paving contractor, Tilcon didn't actually spend too much time on the job — only about three weeks over the course of nine months. But when Tilcon was needed, the site contractor expected the Tilcon crew to get its paving done quickly and efficiently.

Josh Benson, manager, construction engineering at Tilcon New York Inc., explains that Tilcon came into the job after the curbs, sidewalks, and groundwork had been done. The paving took place in three stages — stage one was an access road, stage two the parking lot, and stage three another access road. Each time the site contractor was ready for Tilcon to complete a stage, Tilcon sent a crew to the site. Because of Tilcon's size and number of employees, they had no problems with scheduling issues when they needed to send workers to the Home Depot on short notice.

"The stages were pretty much based on the site contractor and the building contractor," Benson said. "So in other words, we'd do a section of the parking lot, and then they'd move their equipment and we'd do another section, and so on."

During each stage, the Tilcon crew put down quarry process stone and immediately followed with a 6-inch base course to protect the stone from the elements. Tilcon used a 10-man paving crew on the Home Depot site. The crew ran two 10-ton rollers and a Cat 5510 paver. The stage work went smoothly for Tilcon because of the large space they were working in — there were no problems with moving equipment out of the way of the paving process.

Over the course of the three stages, the Tilcon crew put down 7,200 tons of quarry process stone in 10 nonconsecutive days. After the last access road was paved, Tilcon completed the 2-inch surface course, what Benson calls "the trim work" — the finishing touches to the pavement job that gave the lot and service roads a nice look and smooth riding surface. Tilcon laid 8,700 tons of hot mix asphalt over six days for the surface and base courses.

"Home Depot was happy not only with the quality of the work, but because we were there when they wanted us there," Benson says. He says the job went smoothly because of the communication between the different contractors.

Benson commends the performance of the Tilcon crew in making the Home Depot job a success. "The parking lot was very flat and showed no signs of water pooling on the lot, which is a result of the commitment to the finished product and the experience of the stone and asphalt crews," he says.