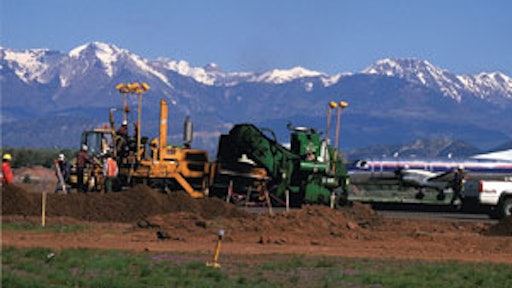 When the Durango-La Plata County Airport decided to go ahead with a plan to improve its one runway, business owners and community members had some concerns. The Durango-La Plata County Airport is the gateway to a flourishing tourist economy around southwestern Colorado's San Juan Mountains. Durango-La Plata is also the only airport in the Four Corners region that is capable of handling the large U.S. Forest Service aircraft used to fight wildfires. With the airport runway down for an extended amount of time, nature, human life, and the economy of the Durango area would be threatened.

Nielsons Skanska Inc., a highway and heavy contractor out of Cortez, CO, took these challenges into consideration when planning this paving project and made a few changes to minimize economic and public impacts on the community. The quality of the end project led the National Asphalt Pavement Association to recognize Nielsons Skanska's unique job with a 2003 Quality in Construction Award. The Colorado Asphalt Pavement Association also awarded Nielsons Skanska with a 2003 Best Overall Quality award in the airport division for the Durango-La Plata County Airport job.

The original job contract called for the paving operations on the 9,600 foot-long runway to take place in three stages over two months — to pave one end of the runway, then the center, and then the other end. The runway would have been shut down for one month during phase two when the center section of the runway was being paved.

Nielsons Skanska worked with the airport to schedule the project in two stages, shortening the time airport operations would be affected. Phase one saw the paving of 1,800 feet of the south end of the runway, leaving the rest of the runway open for air traffic and only slightly impacted. During this first phase, the Nielsons Skanska crew fine tuned the paving process to help phase two, when the rest of the runway was to be paved, go as smoothly as possible. The company also worked to gain Federal Aviation Administration approval for the landing of forest service, commercial, and light aircraft on the Durango-La Plata County Airport taxiway, which also helped to minimize community impacts. Nielsons Skanska crews worked 14- and 15-hour single shifts, double shifts, and weekends to finish the paving early and a quarter of a million dollars under budget.

"Using the two-phase approach opened the runway for unrestricted use 11 days ahead of schedule," says Chris Eastin, vice president of Nielsons Skanska. "A significant achievement since the original three-phase plan had called for two months of paving work."

One of the challenges for paving crews at the Durango airport was the runway grade, which needed to be brought up to current FAA standards.

In any other situation, the grade change problem would have been addressed by removing the asphalt pavement, strengthening and stabilizing the dirt, regrading, then bringing the base and new asphalt pavement up to current design standards. Eastin says that would have taken a long time — too long for the community of Durango. So the project's design drew on an alternative plan to use asphalt pavement as fill material to level the runway surface.

The first step in the leveling process was for the crews to mill areas of the old runway to provide a uniform base for the new pavement. Then commenced the central step of the leveling effort — varying lifts of asphalt paving to build new paving depths that ranged from 1¼ inches to 17 inches along the length of the runway. The thicker patches required several lifts, each with its own curing time before another layer could be added. For example, the process for the 17-inch grade correction began with placement of one lift of 2-inch thickness. Five subsequent lifts, each 3 inches in depth, were used to bring the area up to the desired grade.

"Seventeen inches is very deep," Eastin says. "It requires many lifts, you have to keep a lot of compaction to maintain the density, and it makes the paving more complicated. But the trade off is that you can accomplish the work in a shorter time period."

Two-inch intermediate and 2-inch surface courses were added on top of the leveling course, following placement of an asphalt tack coat and paving fabric. In all, Nielsons Skanska laid 78,800 tons of asphalt paving in six weeks. The job also included four miles of underdrain, electrical work, seeding, and pavement markings, all completed in conjunction with the runway paving operations.

Nielsons Skanska met all FAA smoothness and elevation grade criteria on the project.

"The smoothness results that were achieved for the Durango project were quite good, and it's a little bit of an unusual accomplishment because of the paving depths we were talking about," Eastin says.