JSC's decision to go all warm mix, along with its continued efforts to recycle the maximum percentage of reclaimed asphalt, is a win-win for its stakeholders and the environment 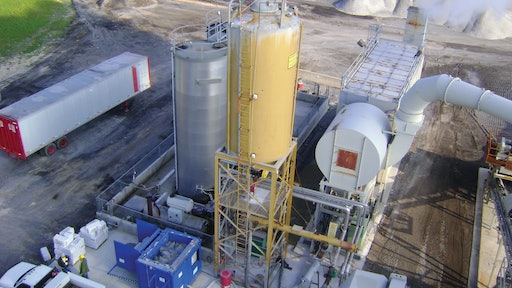 JSC’s decision to go all warm mix, along with its continued efforts to recycle the maximum percentage of reclaimed asphalt, is a win-win for its stakeholders and the environment.

Jim R. Smith started his company in 1959 as an earthwork and excavation subcontractor catering to large infrastructure contractors and limestone quarries in Western Kentucky.  During the next decade, Jim Smith Contracting (JSC) participated in many grade and drain projects for the Kentucky Department of Transportation and the Corps of Engineers.

During the 1970s, JSC expanded into asphalt paving, a move that coincided with the construction of Interstate 24 through Western Kentucky.  Jim R. Smith also founded and expanded several coal strip mines that were subsequently sold. Smith also expanded his horizons through ownership in the Paducah Louisville Railroad, VMV Locomotive Shop, a large fuel distribution company and a hotel and convention center. The company successfully divested the Railroad business, hotel and convention center to focus more on the contracting business.

JSC opened its own limestone quarry in 2004 along the Cumberland River in Livingston County. The quarry was founded on one of the largest continuous deposits of Limestone in the County. Titan, a Greek-owned company, purchased the quarry operation in 2007 and later sold it to Pine Bluff Sand and Gravel.  This mega quarry produces limestone for markets as far away as the Mississippi Delta and the Gulf of Mexico.

Last year, the company made the decision to produce 100% warm mix.

JSC has been recycling reclaimed asphalt since the early 90’s and started producing 100% warm mix in 2011, says Brian McReynolds with JSC.

"JSC began producing warm mix to minimize energy demands and improve the work environment for our employees," says McReynolds. "Long term, we expect to see reduced wear on our plant and equipment. Short term, we've already experienced an increase in production and quality as a result of the working conditions."

In addition to warm mix and recycling, JSC has produced porous pavement for projects at Murray State University and several commercial developments. Other customers the company typically serves include the Kentucky Transportation Cabinet, US Army Corps of Engineers and local city and county governments.  JSC also sells asphalt to other contractors at its four locations.

"JSC averages around half a million tons of asphalt when considering our sales to other asphalt paving contractors," says McReynolds. "Total tons per year is cyclical based on the state budget and depends on new highway construction and maintenance programs in our area."

JSC has experienced great success recycling and producing warm mix. "The Kentucky Transportation Cabinet has been accommodating and appreciative of all contractors who wish to use warm mix," says McReynolds.

The challenges of green mixes

As with any new process, one of JSC's greatest challenges came not with the production components but with convincing customers and agencies that warm mix was the way to go. JSC's employees also received training on the warm mix.

"JSC held informational meetings and demonstrations for our employees and customers to ensure them the green products were not compromising quality," says McReynolds. "Our plant operators very quickly noticed the impact of lower temperatures on our baghouse and dust delivery system. Once we adjusted our practices to compensate, production has remained constant."

JSC chose an additive system versus a foaming system to produce its warm mix. It installed additive tanks at all its asphalt production system as well as its bulk terminal.

"We feel foamers are beneficial, but additives are necessary to fully take advantage of warm mix technologies," says McReynolds.

JSC chose Evotherm Warm Mix Technology additives to produce its warm mix. Evotherm WMA is a comprehensive chemical additive system designed to allow the production and compaction of high-quality asphalt pavements at temperatures as much as 100ºF lower than conventional HMA.  The Evotherm chemical additive package enables asphalt to coat aggregate at reduced temperatures while also lubricating the mix to improve workability and compaction.  The additive package is designed to improve adhesion at the asphalt-aggregate interface thereby addressing water sensitivity issues.

JSC's experience with Evotherm has been nothing but positive, says McReynolds.

"Evotherm has offered insight into the research and development that is necessary to prove their product," he explains. "They have provided technological assistance to us along the way and continually ensured their products are performing."

While it wasn't an easy road, McReynolds feels the investment JSC has made in WMA and the decision to go 100% WMA is the best one for the company, its employees, its customers and the environment.

"We had a lot of old habits and myths to break based on the theory that hotter makes asphalt a more workable product," he says. "We have not lost any customers. Even those who were skeptical began to appreciate the improved working conditions after becoming familiar with the warm mix.

"We see ourselves on the leading edge of our industry," he continues. "We feel warm mix will be a mainstay, and all producers will adapt the technology in the near future."