Get into the Groove 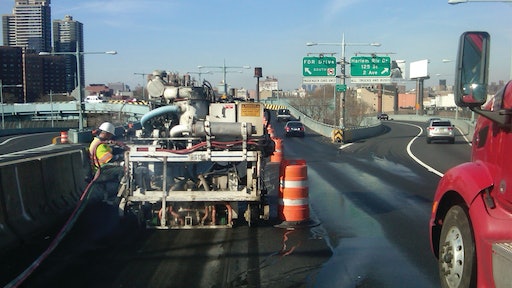 Franklin D. Roosevelt East River Drive (known more commonly as FDR Drive) inter¬sects at 125th Street and the bridge heading northbound. The FDR ramp, approximately 1,800 feet long and 70 feet wide, was in need of surface repairs.
The existing asphalt pave¬ment was subject to extremely high levels of truck traffic and was distorted and shoved to the point where it was considered a safety haz¬ard. To this end, the MTA looked to diamond saw cut surface textures into the new surfacing for added safety, because it can provide unparalleled wet weather traction and stability.

On this section of roadway, the existing high-performance overlay, which was applied a few years prior, had begun to show signs of wear. The solution came in the form of longitudinally grooved asphalt overlay. The project involved milling, paving and grooving, which were performed over the course of approximately three weeks.

Tully Construction, a family-owned construction firm out of Flushing, NY, was responsible for the milling and paving on the project; Safety Grinding & Grooving, LP was responsible for the grooving. The company has been performing pavement grooving since it was formed in 1983, says John Depman, PE, with Safety Grooving & Grinding, which has several locations throughout the country.

One of the challenges with this ramp project was as the only ap¬proach from Northern Queens and Randall’s Island to Manhattan, work time for the FDR ramp was reduced to five hours or less. Daytime work took advantage of the unseasonably warm January weather.

Other challenges included  the heavy New York City traffic as well as the tight radius working zones due to the curved ramps which necessitated the use of several different sizes of machinery, according to Depman. Highway grooving machines typically come in several sizes, ranging from 12 inches up to 6 feet in width.

The blades are mounted and spaced on a horizontal shaft, and are cooled constantly by water pumped from a tanker, which is then re¬covered by an on-board vacuum system. These discrete channels can be constructed transversely or longitudinally into both concrete and asphalt surfaces.

On the FDR Drive project, a Cushion Cut TBG130B grooving machine from Diamond Products was primarily used. The unit can groove on a 12-foot-wide lane and realign for the next pass in one backward movement, enhancing productivity. In this case, the unit was turned sideways and worked longitudinally, i.e. with traffic.

Studies have shown that poor road conditions play a part in accidents. "Grooving a road’s surface will greatly improve wet weather traction and will significantly reduce accidents during inclement weather conditions," says John Roberts, executive director of the International Grooving & Grinding Association (IGGA).
Research conducted by the California Department of Transportation (CALTRANS) shows that pavement grooving makes roadways safer, concluding that grooved surfaces resulted in an overall decrease in accident rates of 69 percent on average for the highways studied, in both wet and dry conditions.

Roberts says grooving has been performed on asphalt for the last 40 years. "Grooving of asphalt runways at all major runways is commonplace and has been done for many decades," he says. "Longitudinal grooving is much cheaper than replacing the existing AC pavement. It is also much less disruptive to the driving public as it requires less time and minimal traffic control to construct."

Information provided by the International Grooving & Grinding Association (IGGA), which is committed to the development of the diamond grinding and grooving process for surfaces constructed with Portland cement concrete and asphalt.