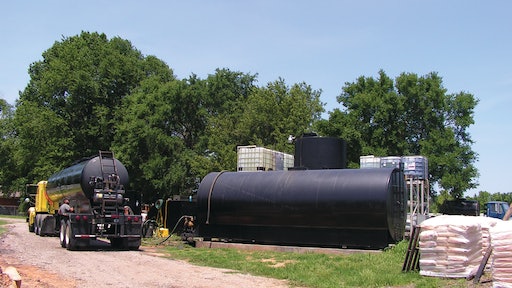 For contractors looking to diversify their company, offering additional services can open up several opportunities with new and existing customers. However, success isn’t always as simple as adding new services. In order to gain the most momentum, contractors may explore rebranding their company to better fit the new services. Martha Moore, owner and president of McCormick Works located in Ozark, AR, is one contractor who recognized the benefits of rebranding the company to reflect its current services.

The company, originally called McCormick Asphalt Paving and Excavating, Inc., has offered road building services since 1990. Moore’s father and two brothers started the company, and she joined them as a roller operator. “My father had been laying asphalt for other people, running crews, acting as foreman for top jobs,” Moore says. “He and my two brothers decided they wanted to start their own business doing the work they knew how to do.”

In 2000, Moore’s father and brothers left the business, and she began to make a few changes. “After they left the business I saw an opportunity to become a U.S. Small Business Administration certified Women-Owned Business,” she says. “I started managing the company a different way. We now do everything from roofing, septic systems, drainage, tree debris removal and all of the asphalt services McCormick Asphalt Paving offered.”

Currently, asphalt services consist of 25 percent of business for McCormick Works. Including the additional services seemed to be the next logical step for Moore to take. “We would already be on a project completing work, and it dawned on me that I was missing a lot of opportunities by focusing on one service,” she says. “The mindset had always been, ‘Do one thing, and do it well.’ That doesn’t apply to the industry anymore, and you have to offer a gamut of services in order to survive the ups and downs.”

As the company progressed from strictly road building to roofing, septic, drainage and other services the idea to rebrand became apparent because most of her clients weren’t aware of the services the company offered. Moore’s daughter, Carissa, nearing completion of her MBA from University of Arkansas Little Rock, decided it was time to rebrand the company. Due to the complexity of implementing all changes for rebranding, Moore set a target date of Jan.1, 2013 to have all of the company materials updated.

“Rebranding seemed important because we have evolved over the past two decades,” Moore says. “The first step was changing our name from McCormick Asphalt Paving and Excavating, Inc. to McCormick Works. We needed to change our name to show that we offered services outside the asphalt paving company. The tagline for the company is now, ‘For all your contracting needs — McCormick Works.’”

After determining the new name for the company, Moore moved on to find a logo. Choosing a new logo isn’t always an easy task, but Moore started with a few designs by her son-in-law. “We wanted something clean and sharp,” she says. “We wanted something that when you looked at it, it would be unique and different than what you normally see. We played with designs and designs until finally coming up with one we liked.

“We registered the logo as our trademark with the Secretary of State of Arkansas. All of our vehicles and equipment have the logo. It is also on our work shirts.”

Once the new name and logo were decided, the next steps were updating all of the company’s information from the website, to letterhead to voicemails. “We did one task at a time,” Moore says. “I still see McCormick Asphalt Paving and Excavating, Inc. out there. The automated phone system still uses the original company name —we’re forever calling to change the message. It’s been a challenge to get everyone onboard to use the new logo in place of the same one we’ve always used.”

When rebranding your company, it’s also important to inform your clients of the changes being made. Moore took this opportunity to inform her clients about services they maybe weren’t aware of. “We sent letters out to our clients thanking them for our relationship and reassuring them that we are only improving all the work we have done for them in the past,” Moore says. “The letter was a general introduction to guarantee that our relationship was as good as it has always been and was only going to improve. I also wanted them to be aware of the new name, logo and that the changes were going to better reflect us becoming McCormick Works.”

Becoming a supplier of Seal-Tite

Always with an eye open for other opportunities, Moore has recently added sealcoat supplier to her job description. “I wanted to do something different because I’ve been in asphalt for 23 years,” Moore says. “When the crew calls me and says someone didn’t show up for work I put on my boots and safety vest and operate equipment. I don’t want to quit doing what I’m doing with McCormick Works because I’m passionate about it, but I want to do something else that can benefit me and create jobs in the area.

“I want to do something that will enable me to work a more regular schedule as far as Monday through Friday. I want to have regular customers I can sell my material to and establish new relationships.”

She first learned about Seal-Tite when attending National Pavement Expo 2012 in Memphis, TN. “Our goal for the expo was to find the best safety equipment to prevent onsite project exposure, related to coal tar, which results in worker’s comp claims,” she says. “I had never considered being a supplier of asphalt emulsified sealcoat.”

After the show, Moore toured the Seal-Tite plant in Missouri with owner Rodney Ashworth. Moore began looking at her local economy as well as the pavement maintenance industry. “Maintenance is crucial because people have less money to spend,” she says. “You need to take better care of what you have to make it last as long as possible.”

The equipment and tanks were set up last summer, and Moore wasn’t able to start production until July of 2012. “The season was practically gone by the time I was able to make the product,” she says. “We took advantage of the time things were being produced to start making contacts with previous customers as well as advertise in the area.”

As the only manufacture of sealcoating products products in Arkansas presently, her goal for the 2013 season is to produce 100,000 gallons of material. “Last year I produced 32,000 gallons in the short time from plant operational status to the end of season, and I know that 100,000 gallons doesn’t sound like a lot,” she says. “We’re doing so many things at once I wanted to break it down into reachable targets. I’m aiming at 500,000 gallons per year , by our 5th year of production.”

Moore also hopes to generate much needed employment in the area. Currently, she has five employees at Seal-Tite of Arklahoma. “If we can’t create jobs here at home, the young people will not stay,” she says. “I want to create jobs and better our community.

“As we grow, there will be more trucking involved and regional sales,” she says. “I believe I can double the number of employees within the first two years, while producing an environmentally friendly, healthier product for use in preservation of asphalt.”

While some suppliers both sell material as well as compete with clients on projects, Moore has chosen to maintain the strict position of supplier of seal coat material. “I have opportunities to bid on projects, but I don’t want to compete with the contractors in this area that will buy my product,” she says. “There are several contracts in the federal arena that are set-aside for Women-Owned business or other certifications that wouldn’t be available to every contractor. Those jobs with a narrowed bidding pool are what I plan to pursue with McCormick Works. However, my ultimate goal is to be a supplier of “Rhyno-Tite” Asphalt Emulsified Seal Coat.”

Is It Time to Rebrand?