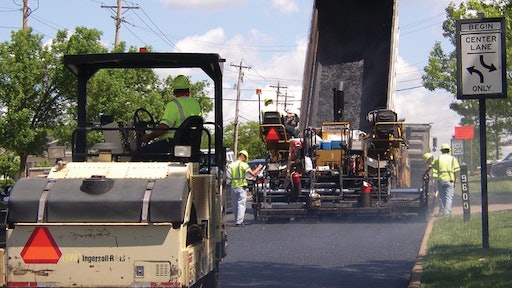 The key to compaction success after the mix has been placed is to roll the mat while it is still hot, so it's important the roller follow close behind the paver.

Of all the aspects of the hot mix asphalt paving process, compaction plays the most important role in determining the useful life of the finished pavement -- even more than the mix itself.

Whether constructing a hot mix asphalt (HMA) pavement from the ground up or placing an overlay, inadequate compaction will result in pavement that will deteriorate more quickly than a properly compacted pavement, causing your clients to spend more money sooner to repair or replace it. Improper compaction will result in pavement with decreased stiffness that can encounter accelerated aging, reduced durability, or increased rutting, raveling and moisture damage – all things that will make your company look bad and inevitably cause you to lose business.

According to the Asphalt Institute Handbook, compaction is defined “as the process used to densify, or reduce the volume of, a mass of material.” For HMA, compaction locks aggregate particles together to provide stability and resistance by using force to compress the particles into a tighter space, thus increasing the density. As air void content is reduced density increases, the mix becomes more stable, and pavement strength is increased.

When most contractors think of compaction they think of reducing air voids. That’s partly because the higher the percentage of air voids in the finished mat the greater the likelihood the pavement performance will suffer in the long run. When air or water penetrates through these voids the mat will encounter premature pavement distress. Air will oxidize the asphalt binder faster, making it brittle and causing cracks sooner. Also, if a pavement isn’t properly compacted it’s easier for water to enter the pavement structure, stripping the asphalt binder from the aggregate resulting in even quicker pavement deterioration.

Jim Scherocman, consulting engineer and National Pavement Expo speaker, says the two most important factors in compaction are use of the vibratory screed on the paver in vibrating mode and mix temperature during compaction. HMA arrives at most jobsites at temperatures ranging from 275 F to 300 F and begins to cool as soon as it’s transferred from the haul truck to the paver. It’s at it hottest when it moves beneath the screed so it’s at that point that most compaction should take place.

The basic pieces of equipment used during the compactive effort are the paver’s vibrating screed and various types of rollers. The vibratory screed provides primary compaction when the mix is at its hottest as mix is transferred from the paver to the surface beneath the screed.

Scherocman says that when mix is placed using a vibratory screed in vibrating mode it will contain roughly 20% in-place air voids. If the vibration in the screed is turned off, the air void content will likely be more than 30% on mix immediately behind the paver.

Considering that proper compaction can reduce air voids to about 8% of the mat which is generally an acceptable target (unless job specs are more restrictive), using a vibratory screed in vibrating mode can make the roller operator’s job easier and can simply make it more likely a crew will achieve desired level of density.

“The problem is that many screed operators turn the vibration off,” Scherocman says. “Why? Because it’s less comfortable to stand on a vibrating screed than a static one. The single biggest improvement and the easiest improvement contractors can make in obtaining density is to operate their screed in vibratory mode.”

Once the mix has been compacted by the screed it still requires additional compaction to reduce air voids to 8%. This is where various types of rollers – vibratory, pneumatic (rubber-tire), and static -- come into play. In a conventional three-roller operation a double-drum vibratory steel roller is the first roller on the mat in what is termed the “breakdown” phase. That’s often followed by a rubber-tire roller in the “intermediate” phase (though more and more the rubber-tire roller is used in breakdown rolling as well). In some cases a static steel wheel roller is used as a finish roller. Scherocman says it’s becoming more common to see two vibrating double-drum rollers operating in echelon (side by side) on larger paving projects involving thicker mats.

But regardless of the types of rollers used or the order in which they are used, the key to compaction success after the mix has been placed is to roll the mat while it is still hot. Scherocman says “Get ‘em while they’re hot!” should be the rallying cry of every paving crew because as the mix cools the binder stiffens and begins to resist further densification.

Compaction must be completed while the mix is hot and workable - generally at temperatures above 175°F. The cooler the air temperature and ground (base) temperature the less time is available for successful compaction and the more difficult it can be to obtain the required density. This is the main reason there’s little asphalt paving during the cold weather.

“The most important thing you can do as a contractor if you want to give your customer a durable, long-lasting pavement is to compact it properly,” Scherocman says.

Scherocman to Cover Compaction at NPE

Effective Compaction of Hot Mix Asphalt — Compaction is the single most important factor in the ultimate performance of a hot mix asphalt pavement. Achieving the proper air void content in the compacted mix makes the difference between a long-lasting asphalt overlay and one that fails prematurely, causing trouble and frustration for you (and your customer). This top-ranked session, by a highly-rated speaker, will help paving crews understand the basic elements of compaction and the use of various types of rollers, including static steel wheel, pneumatic tire, and vibratory steel wheel rollers. Effective compaction of both stiff and tender hot mix asphalt mixtures will be covered. Further, the use of different rollers and rolling patterns for different paving situations will be emphasized.

Identifying, Preventing, and Solving Mat Problems — The asphalt surface your crews put down is the finished job your clients see, and this session will help paving contractors identify potential problems in the asphalt mat so they can provide a better end product for their customers. You’ll learn how to differentiate among four primary problem areas--the properties of the mix itself (checking, shoving, rutting, moisture content, and bleeding), site related conditions (milling, minimum layer thickness, tack coat application, and soft subgrade), equipment related problems (screed settings, surface shadows, streaks), and long term durability issues (raveling, sliding, fatigue cracking, delamination, drainage structures). You will learn what you can do to prevent these problems from happening (and correct them when they do occur). You’ll take home information you can use to help your crew construct the best looking, longest lasting asphalt mat possible.

To register or for details on other of more than 50 educational sessions visit www.nationalpavementexpo.com.

Get Compaction Right at Night