Could Cheese be the Key to Safer Winter Roads?

Wisconsin, the “cheese state”, takes its slogan for a test drive on snow and ice covered roads. 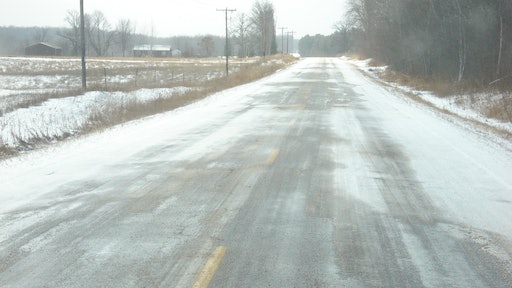 Cheese brine used on a stretch of road in Polk County, Wisconsin was show to dissolve snow and ice better than rock salt.

If you’ve traveled the roads during the winter in many parts of the country, you’ve seen the salt trucks out in full force working to keep the roads free from accumulating snow and ice. You’ve probably also griped about that rock salt, the cost to you the taxpayer, and maybe even the long term effects it will have on your car, the road and the environment. Emil Norby, technical support manager of the Polk County highway department in Wisconsin had the same thoughts.

In 2008, Norby began research to find a cost effective measure to reduce salt and sand use during the winter months. “We don’t have our own saltmaker up here and buying one is really expensive,” says Norby. “I started trying to think of other ways to salt the road, and I thought, dairy farms soak their cheese in brine. Brine is salty. Maybe we can use that.”

F & A Dairy, located in Dresser Wisconsin, turns out thousands of gallons of brine waste in the cheese making process each year. 5,000 gallons a month. And up until Norby came along, that waste stream was disposed of in treatment plants.

Norby found that the high sodium content, around 24 to 25 percent, makes the brine the perfect replacement for conventional magnesium chloride — the chemical most often used by highway departments in the pre-treating of road salt. Norby discovered that by wetting rock salt before it is spread onto icy roadways, it activates the salt to work sooner and stay on the road surface longer.

Considering his findings, Norby worked with F & A Dairy and proposed using their waste salt bring liquid as a pre-wetting agent for the sand and salt on Polk County roads.

“The product is a great win win for Polk County and the dairy,” says Norby. “They get rid of their waste product and we get it for free, just the trucking costs.”

At just 9-cents a gallon to transport the brine themselves from the dairy to the county, it’s far cheaper than purchasing magnesium chloride. Norby says the brine is filtered at the dairy and then transported and stored in plastic tanks at four locations for their crews to use.

They also did experiments with the amount of salt spread onto Polk County roads and found that because the cheese brine has a lower freezing point, it’s more effective at melting ice. Most importantly, the department’s experiments with different mixtures have also proven the cheese brine actually works better. The Polk County highway report also indicated there was no sign of the salt brine residue come spring.

Today, Polk County still uses a regular salt brine, along with a hot brine and magnesium chloride. But they used 32,000 gallons of the cheese salt brine in conjunction last year covering about 1,200 plow miles of roadway.  Bottom line, they have been able to cut their salt use by 30 to 40 percent.

It’s such a great idea, Norby says other counties and towns have also started to use the product. Milwaukee, who has experimented before with alternatives or supplements to rock salt including beet juice and a molasses-type product, will begin a pilot program this winter to determine whether cheese brine is a good option for their roads. Last year, Milwaukee used 44,339 tons of rock salt during a somewhat mild winter.

While there is an ample amount of rock salt available, Wisconsin is the country’s leader in cheese production so why wouldn’t we explore using the cheaper and more abundant option to clear roads from snow and ice? Well done Polk County.