Industry leaders, advocates gathered in Washington D.C. this week to start the hard work of convincing Congress to pass a bipartisan transportation bill that meets our failing infrastructure needs 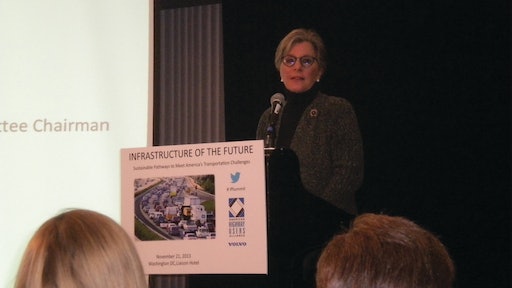 Transportation industry leaders and advocates gathered this week in Washington D.C. in the shadow of the U.S. Capitol building to have the hard conversation on how to convince Congress to pass a bipartisan transportation bill next fall that will meet the country's failing infrastructure needs.

The MAP-21 (Moving Ahead for Progress in the 21st Century) bill will expire on October 1, 2014, and many in our industry and in Washington know the high mountain that needs to be climbed to get a new highway bill passed in a timely fashion that will also cover the needs of the country's myriad infrastructure problems. "Our infrastructure is in trouble," said Senator Barbara Boxer, Democrat from California and Chairman of the Senate Environment & Public Works Committee, during the summit. "We have a huge job ahead of us."

There were several years of extensions to get MAP-21 passed in July 2012. MAP-21 has laid the ground work for many reforms. What the current bill is missing, and what is most important with the next reauthorization bill, is how to properly fund the transportation bill.

Revenues from the highway user taxes, at existing rates, are too low to support continued federal highway and public transportation investment at current levels. In fact, recent projections from the CBO (Congressional Budget Office) show the trust fund would be unable to support any new obligations for highway and transit improvements in FY 2015, as all revenues collected that year would be needed to pay existing obligations.

Industry experts from Bud Wright, executive director of the American Association of State Highway & Transportation Officials (AASHTO), to Congressman Bill Shuster, Chairman of the House Transporation & Infrastructure Committee, to to Sean Connaughton, Virginia Secretary of Transportation, were on hand at the Liaison Capitol Hill Hotel to lend their opinions to how best solve the issues facing the next highway bill.

Sponsored and planned by the American Highway Users Alliance and Volvo Group North America, the summit was also a way to broaden the support base for the next highway reauthorization bill. Members from associations representing manufacturers, retailers, trucking and even state governors were invited to speak on how the failing infrastructure in the U.S. is impacting each of their segments.

"There's a long road ahead of us filled with potholes, forgive the pun," said Jay Timmons, president and CEO of the National Association of Manufacturers. "Congress is not educated on the importance of improving the infrastructure. That body needs to see and understand the value of a modern, efficient transportation network that will increase productivity and better the economy."

Matthew Shay, president & CEO of the National Retail Federation, agreed, adding that infrastructure and transportation are seen as "second tier" issues that need to be elevated in priority. "We need to hold the members' [of Congress] feet to the fire in order to get a sustainable bill passed," he said. "If we have to vote people out, then that's what we have to do."

Congressman Bill Shuster, Republican Representative for Pennsylvania's 9th congressional district, says transportation and infrastructure issues are a core function of the federal government. He feels the more average Americans can understand how failing infrastructure impacts them, the more support the issues will receive and funding will follow.

"We need to build a case for the American people that there is a problem and it affects them directly," he says of failing infrastructure. "If we make the case, funding will be a by-product."

He uses the examples of several states - including California, Indiana, Minnesota, Michigan, and many more - that grew tired of waiting for the federal government to "ride in and save the day" and instead implemented their own strategies such as raising the gas tax or implementing public-private partnerships (P3s) to get the job done. "These states built a case and sold it to the people that there was a problem that needed to be solved, " Shuster says. "And the people voted to raise taxes and solve the problem. If they know how it affects them, they will find a way to fix the problem."

One example of a conservative state that brought about true tax reform and solved the funding problem is Virginia. And they did it by working with both parties during an election year. "We showed the people - look Virginia is going to run out of money and we have to do something with the funding streams," says Sean Connaughton, Virginia's Secretary of Transportation. "We took all the excuses off the table, and quite frankly, we ran this legislation like a political campaign. We put together a proposal that was bipartisan and had full support of the governor. And the people of Virginia were behind it."

As a matter of fact, Senator Boxer suggested last month that Virginia's new funding scheme, particularly the new wholesale sales gas tax, could be a model for a replacement of the federal gas tax.

Virginia did away with its statewide 17.5 cents-per-gallon tax at the gas pump entirely, in favor of a new wholesale tax of 3.5 percent on gasoline and 6 percent on diesel, along with an increase in the state’s general sales tax. In the heavily populated Washington suburbs and Tidewater area, motorists pay an extra 2.1 percent sales tax on gas purchases. Drivers of electric and hybrid vehicles pay a $64 annual fee.

Virginia's new tax scheme is successful in that it raises more revenue than the 17.5-cent gas tax it replaced, says Connaughton. "Usually, we would have $200 to $250 million in paving on average in Virginia," he says. "This year alone, we had $500 million done in paving, and we have at least $500 million scheduled each year for the foreseeable future. We will have all our primary and secondary roads up to standard in the next few years. That's what I call a success."

Congressman John Delaney, Democratic Representative for Maryland's sixth district, presented his new bill HR 2084, The Partnership to Build America Act (PBAA), during the summit.  The PBAA establishes the American Infrastructure Fun (AIF) to create jobs and rebuild America's infrastructure. The AIF is a $50 billion entity that makes loans and loan guarantees to states and local governments to finance infrastructure projects in ducation, water, transportation, communication and energy. The fund is capitalized by repatriating overseas earnings through a one-time sale of 50-year bonds.

"Acting primarily as a bond guarantor, the AIF would be able to leverage $50 billion to $750 billion in infrastructure financing," says Delaney. "Even the most conservative estimates of jobs created by infrastructure spending confirm that $750 billion would result in millions of jobs."

Delaney also pointed out that this is the first infrastructure financing bill introduced in the House in the last 15 years that has bipartisan support, with 25 republicans and 25 democrats, as well as a bipartisan Senate companion that is expected to be introduced.

The summit highlighted the battle the transportation industry has ahead of itself in the coming year. The hope seems to rest on the will of the people to support a reauthorization bill with sustainable funding if they understand how it affects them.

Former Kansas Governor Bill Graves, now the president & CEO of the American Trucking Association, summed it up best, "Most Americans aren't naive enough to think you can get something for nothing," he says. "Unfortunately there are some that think you can get something for nothing - and they've been elected to Congress. These 'infrastructure deniers' will have to listen to the American people, who are willing to pay more if they understand the problem. We may have to raise the federal gas tax; tolling isn't the answer - it's part of the solution. And that's what we have to find - a solution to this problem."