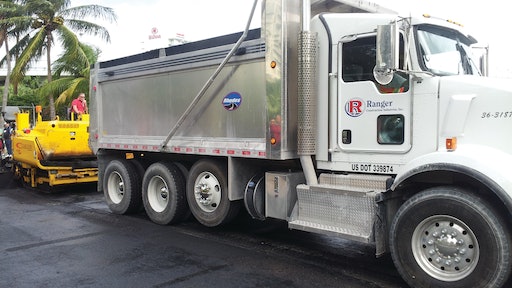 For the first time since 1999, The National Pavement Expo, sponsored by Asphalt Contract and Pavement Maintenance and Reconstruction Magazines, brought back live outdoor demos to showcase the equipment contractors are in the market to purchase at the show.

“NPE has wanted to conduct outdoor demonstrations for some time and our decision to hold the show in Fort Lauderdale enabled us to do that,” said Allan Heydorn, conference manager and organizer of the demonstrations.

The demonstrations started on Thursday afternoon with some surface preparation, stripe removal and routing before the rain put all thoughts of sealcoating on hold. When the rain subsided Friday morning, the demos were kicked off by Bomag Americas and the BM 600/15 Cold Planer. The machine milled up 1-1/2” of existing from the area that measured 20 x 130 ft.

“The BM 600/15 was new to the U.S. market in 2013,” says John Hood, director of sales at Bomag. “It’s a 24” mill and is designed for commercial paving contractors to help them edge, mill, make utility cuts and do patching.” Hood adds that the BM 600/15 was designed to replace a skid steer with a front mounted grinder attachment.

After the milling was completed, both Elgin Sweeper and Schwarze Industries brought in their sweeping equipment to clean up the mess. Construction sweeping is essential to cleaning up the debris the milling machine leaves behind before paving can begin.

Next, Ranger Construction from West Palm Beach, donated 20 tons of S3 hot mix asphalt to be used to pave the milled surface. “We like to give back,” says Dawn Miller from Ranger Construction, “It’s very important for us to be a part of these events and this one was phenomenal. The turnout was great and the response from the crowd was even better.”

The first pass of the paving was placed by a CP100 from Carlson Paving Products. This three man unit replaces the smaller CP90 the company previously offered. “The CP100 is a true 100 horse unit with a Tier 4i engine,” says Kevin Jeske, great lakes regional manager at Carlson Paving. The unit offers a longer lifecycle for the material in the handling system and now comes with a handheld wireless remote that can control the screed functions from up to 50 ft.

Paving was completed by a Leeboy 8616B Track Paver which is specifically designed for road and commercial applications, but completed the work in the small location with no problems at all.

Once paving was complete,  The Paving Lady, a company based in Boynton Beach, FL, donated her crew’s time and equipment to assist with the compaction. A CAT CB824 utility compactor rolled the fresh asphalt in between both paving passes.

“Despite some rain on the first day the 16 demonstrations were a great success. Hundreds of contractors were able to see the entire spectrum of paving and pavement maintenance equipment put through its paces. We demonstrated everything from milling and paving to sweeping, striping, sealcoating, cracksealing and infrared repair -- so if contractors wanted to see a technology in action NPE 2014 was the place.”