Match the asphalt paver screed to the application to deliver the best results for your projects. 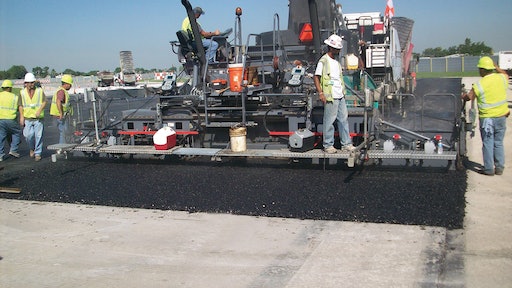 Heavier and more rigid compaction and high compaction screeds, such as those available on Vogele pavers, allow contractors to pave wider to eliminate joints, and increase in-place density to improve smoothness and surface texture.

Asphalt paver screeds are available in three basic designs: fixed (wedge lock), and hydraulically extendable front-mounted or rear-mounted extension. Which screed you choose to use on a particular project can substantially affect the end results.

“Selection is critical for the best possible outcome,” says Tom Travers, sales and marketing manager, Carlson Paving. A screed must be able to:

Also pay attention to the track record, life-cycle costs, manufacturer training and support and ease of adjustments to the screed to ensure you make the choice that will work best for your applications and crews, Travers advises.

Put the Most on Your Plate

According to Laikram “Nars” Narsingh, product manager for Wirtgen America’s Vögele line of asphalt pavers, the industry standard free-floating screed is held to grade by the:

“When these forces are in balance, the screed is held to grade with an equilibrium angle of attack,” Narsingh explains. “This angle of attack ensures that the trailing edge of the screed plate does the final screed compaction and sets the surface texture.”

Changes to any of these forces will result in a change in equilibrium in the attack angle, pulling the screed plate off grade and resulting in roughness and mat blemish. “So it’s important to ensure maximum stability of these forces to optimize screed performance,” says Narsingh.

While some contractors believe the wider the better, John Mooney, product manager for paving and milling products, Volvo Construction Equipment, recommends full-depth screed plates, since they tend to provide longer wear life and dwell time. “The screed plate should use at least three-quarters of [the surface area] to get as much screed plate wear as possible and dwell time of material underneath, forcing the asphalt mix to become a smooth surface,” he explains.

While fixed screeds were highly prevalent 20 years ago, front- and rear-mounted extendable screeds have become the preferred choice of today’s contractors. Their hydraulic extensions offer greater versatility compared to the bolt-on extensions required to adjust width on fixed models.

Selection of screeds is generally based on the overall weight and width limits of the project. “As the majority of highway paving is between 12 and 14 ft., most manufacturers’ widths and weights are pretty much the same,” Mooney notes.

Where this comes into question is when the application calls for widths over 20 ft. “This is where many screeds differ,” says Mooney. “There are leading edge screeds with limits to extensions that must, in the retracted state, fit inside the total 10-ft. width of the main screed. Rear extending screeds by design have hydraulic extension cylinders that can be mounted in such a way that, although not inline, they can provide full 20-ft. widths.”

Front extending screeds typically extend to about 18 1/2 ft., close to or even with the front screed plate. “The screeds tend to be lighter in overall weight because of the design,” says Mooney. “The rear extending tend to be a little heavier.”

Front extending screeds are more commonly used on smaller commercial applications, since they require less clean-up work. “I will argue that a front- extending screed is easier to control when unloading and provides less work for the ground crew during jobs that require many stops and starts, changes in widths and while paving around obstacles,” Mooney asserts. “Rear-mounted extensions give that extra width advantage but require more work to clean up in smaller jobs. On a larger pull where it may be only a couple of starts, stops make little difference.”

Oftentimes, the choice between the two boils down to familiarity and personal preference. “The contractor has a lot of choices and the preference over front- or rear-extending can be a debate on which is more effective,” says Mooney.

Return of the Compaction Screed

“Compaction screeds have been used in North America for about 20 years, but had become obsolete due to the demand for more versatile screeds capable of performing in multiple applications,” says Narsingh. Now, he believes the technology is making a comeback.

These screeds use a tamper bar located in front of the screed to provide the initial screed compaction. “Heavier and more rigid compaction and high compaction screeds allow contractors to pave wider to eliminate joints, and increase in-place density to improve smoothness and surface texture,” Narsingh explains. “High compaction also can reduce the number of lifts, where applicable, to reduce cost and construction time.”

Compaction screeds tend to be heavier than a typical vibratory screed. “Smoothness and density relative-to-screed are functions of screed weight, rigidity and its ability to increase in-place density,” Narsingh says. “A heavier screed provides more stability… especially with head of material and material consistency [fluctuations]. A heavier screed will also perform better with stiffer mixes that are becoming more popular.”

“In theory, a compaction screed with comparable weight and rigidity will produce a smoother mat than a vibratory screed,” Narsingh asserts.

With that said, many contractors today require a versatile screed designed to handle a range of mainline and commercial paving applications. “For applications requiring constant width and grade changes, an unequal width, front-mount screed [such as the Vögele VF series screed] would be more applicable,” says Narsingh. “When contractor applications include mainline and commercial work, and the infrastructure does not allow the flexibility to choose a screed, a rigid, unequal width, front-mount screed would be a better choice.”