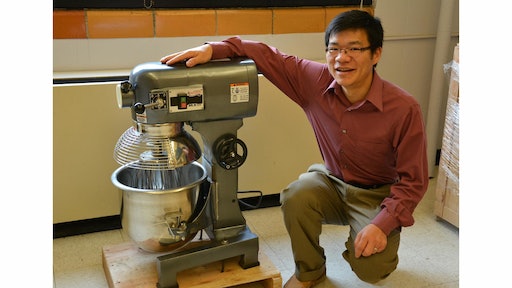 Xianming Shi with the industrial size mixer he uses to concoct green deicers and ice-free pavement.

The Federal Highway Administration (FHWA) has estimated that over 70% of the nation’s roads are located in snowy regions, with nearly 70% of the U.S. population living in these snowy regions. Every winter season, the U.S. spends $2.3 billion to keep those roadways clear of snow and ice, with another $5 billion in estimated damage to the transportation infrastructure and natural environment. For sustainable winter service, agencies have been challenged to provide a high level of serice within their budget and staffing constraints, while minimizing the corrosion and environmental effects associated with the use of salt and other chlorides.

Cold-climate scientists at Washington State University (WSU) are hoping to help and curb that use of road salt with environmentally friendly solutions that include “Smart Snowplows,” vodka barely ice-melt and even a new type of concrete mix for sidewalks that resists ice build-up.

As a nation, "we are kind of salt addicted, like with petroleum, as it's been so cheap and convenient for the last 50 years," said Xianming Shi, associate professor in civil and environmental engineering at WSU.

Currently U.S. roads use about 15 to 20 million tons of sodium chloride, plus unknown quantity of magnesium chloride and calcium chloride for snow and ice control. This winter though, road salt is in short supply across the northern states and in some regions prices have increased by 10% to 30% since last year, Shi said. There are also public concerns about salt's impact on the environment and how it will affect future generations.

"In 2013, the EPA reported alarming levels of sodium and chloride in groundwater along the East Coast," Shi says. "Once salt exceeds the legal threshold, there are increased health risks and you can't use it for drinking water."

To help combat this, Shi and his team at MSU started to evaluate alternative deicers, as part of a research study sponsored by the Colorado Department of Transportation (DOT).

"The focus of that particular study was to evaluate the pros and cons of acetates (typically used on airfield pavement) and agro-based products as potential alternatives to salt and magnesium chloride, as the DOT was pressured to search for alternatives," Shi says. "In 2012, my team started the development of alternative deicers, as part of a research study sponsored by the Alaska DOT. We successfully developed anti-icing formulations made from locally available distillery byproducts, rock salt, and a few other additives. All these efforts aimed to help agencies reduce the reliance on chlorides for snow and ice control. At Washington State University, our ongoing study will develop liquid products tailored to meet the various requirements in highway anti-icing performance, cost, and impacts."

Though snow and ice control can appear simple - just plow the road and put on some salt or sand - Shi said getting it right is highly technical and involves detailed science and engineering.

His research has led to the advances and evaluation of sensitive new technologies like the Smart Snowplow, which comes loaded with sensors and is already being integrated into winter fleets, he said.

Smart Snowplows mainly indicate the technologies that turn the snowplow into a "mobile data collection platform". Such cutting-edge technologies can make maintaining winter roadways more efficient, safer and less costly. For instance, Automatic vehicle location (AVL) is a vehicle-based technology that builds on the need for communication of data between a center and maintenance vehicles in the field.

Some sensors that may be integrated with AVL include:

The salinity sensor, for instance, can help the operator to avoid overapplication of salt or other deicers by indicating the residual salt concentration on the pavement from previous applications.

"In the past, it was all done visually," Shi explained. "By the time you can see salt on the road, it's way too much and is going into the vegetation and groundwater."

Another innovation Shi helped evaluate is the open source software called Maintenance Decision Support System, funded by the Federal Highway Administration (FHWA). The program can be installed at city maintenance shops or on snowplows.

"It can tell you current road and weather conditions, give weather forecasts, inventory salt supplies and suggest application rates based on those variables. It also allows you to model alternative types of salts to see what will happen," he said.

Solutions in the mix

At WSU however, Shi's real passion is cooking up green deicers and ice-free pavement. In his laboratory, a brand-new, industrial size mixer awaits his "culinary" genius.

"There is a lot of talk about beet and tomato juice deicers that are meant to be less corrosive to vehicles, guard rails, steel bridges and concrete pavement," he said. "They help, but there is still plenty of room for improvement."

Besides tweaking the recipes for beet deicer, Shi has successfully developed an ice-melt composed of leftover barley residue from vodka distilleries.

He is also mixing up several new types of concrete that can streamline snow and ice removal while protecting the infrastructure. Deicer-resistant concrete, for one, doesn't break down as quickly in the presence of salt and chemicals, thereby extending the life of roads and sidewalks, Shi said.

For ice-free concrete, Shi adds nano- and micro-sized particles that make the pavement less prone to icing over. By producing a surface barrier, the mixture prevents bonding with snow and ice. This, in turn, makes plowing easier and decreases the need for salt, he said.

"Our ultimate goal is to apply the best amount of salt, sand or deicers at the right location at the right time," he finished.

Could Cheese be the Key to Safer Winter Roads?