A look at the Pennsylvania transportation bill and the positive effect it’s had on infrastructure, state business climate and the construction industry 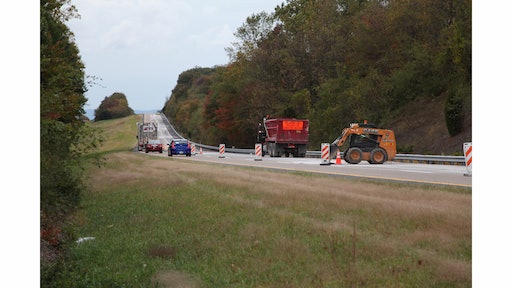 Dan Hawbaker, president and CEO of Glenn O. Hawbaker Inc., sees Pennsylvania's increased funding as a way for his industry to attract and retain young workers – and show them that careers in construction can be rewarding.

Pennsylvania has been the poster child for deteriorating U.S. transportation infrastructure, but many states now consider emulating its Act 89 -- year-old legislation that is addressing Pennsylvania road and bridge woes.

Act 89 went into effect on January 1, 2014. It is a user fee increase expected to add $2.3 to $2.4 billion to infrastructure revenue annually by its fifth year. The legislation kept vehicle registration and license fees low and rolled the flat gas tax of 12 cents that had been charged at the pump into the Oil Company Franchise Tax (OCFT) charged at wholesale. It removed the artificial cap on the OCFT over the course of five years.

The law included provisions allowing counties to enact a $5 registration fee for highway and bridge projects – but it is largely tied to the gas tax, which had not been adjusted in Pennsylvania since 1997.

States wrestling with how to generate new funds for highway maintenance generally see user fees -- tolling, fuel- and vehicle-related taxes or registration fees -- as most practical. Gordon Denlinger, a Pennsylvania state representative (R-Lancaster County), attributed the success of the bill to a bipartisan effort including some who generally oppose revenue increases.

"There are times when elected officials, including those who, like myself, squeeze the nickel pretty hard, need to accept the responsibility of governing, display some guts, and move the [transportation] ball forward," says Denlinger. "Responsible leadership means letting go of some of those sacred cows and taking a serious look at the true needs that are out there -- needs like public safety and economic growth."

Video: PA's Act 89 is Infrastructure for the Greater Good

"So far there's been a net increase of zero — gasoline prices are lower today than they were when the bill was passed," says Jack Mills, owner and president of Plum Contracting. "People are happy. They're getting all this work and all this money and these better highways and bridges, and it hasn't really cost them any more."

A year of progress

PennDOT reports hundreds of new projects -- everything from rail and aviation to roads and ports -- made possible by Act 89. A particularly harsh winter expedited spring investments to fix potholes and buckled pavement. Act 89 allowed PennDOT to bond $150 million to fund repairs, an aggressive approach that has moved state road conditions ahead of expectations.

"We're probably going to deliver between $2.3 and $2.4 billion of improvements this year, which is about $250 million more than we initially estimated and promised," says Pennsylvania Transportation Secretary Barry Schoch. "So I would say not only are we on schedule, but we're ahead of schedule for delivering the benefits of Act 89.

"Every year 300 bridges become structurally deficient," says Schoch. "So you have to do 300 bridge repairs or replacements, or you're losing ground. We'll do about 450 this year. We also, because of our Public-Private Partnership (P3) law, and the new funding, have a pending selection for an entity to come in, design, build, finance, operate and maintain 558 structurally deficient bridges, replaced from the ground up, in about 3 1/2 years, rather than what would have taken us probably 10 years to get to."

Pennsylvania’s 2014 experience has been a great example of infrastructure investment’s ability to create jobs.

"Last year our maximum employment was 105. This year, our last payroll I had 145 employees," says Mills.

Mike Savastio, president/CEO of heavy equipment dealer Groff Tractor and Equipment Inc., reports similar growth: "We've added probably 15% to our workforce this year," he says. "We've added five new salesmen, 12 new technicians. Quite frankly, we'd probably be hiring more if we could find people. It's still somewhat of a challenge. Everybody's ramping up at one time, so there's a little bit of a competitive environment out there."

Workforce development is challenging the entire construction industry. Dan Hawbaker, president and CEO of Glenn O. Hawbaker Inc., expects increased Act 89 funding to help his industry attract and retain young workers, and to show them how rewarding construction careers can be.

"With some secure funding, that gives us a look at the future to say now we can afford to get into training programs," he says. "With the economy picking up, now we're recruiting people because we have to. We're looking forward to 2015 to make sure we have a workforce. We can afford to get into capital expenditures and look at them more seriously than we have in the past two or three years."

"This year already in 2014 with the increased spending, I have purchased over a million dollars worth of equipment," says Mills. "The last three years, with the lack of funding, we have struggled with capital improvements. But now that I know that there's funding, it lets me look a little bit further ahead to some of the things that I want to do with this company."

David Beinhower, CFO of E.K. Services Inc., sees the greater backlog of work as a confidence builder for his company and his employees.

"We made some investments in new equipment, probably added about $700,000 worth of equipment to our fleet," he says. "When you have employees on a particular project, and you don't show them maybe the next project, or maybe even two projects beyond where you're at, they feel like they're working themselves out of a job, whereas here they can see the backlog. It brightens their outlook on employment. We can be more committed and show them our long term goals as well."

All of these benefits are elements of the state’s ability to attract new businesses. A recent corporate executive survey at AreaDevelopment.com suggests the top two site-selection factors attracting new companies to an area are availability of skilled labor and access to highways.

"The scope of our competition is across the globe," says Denlinger. "If Pennsylvania's infrastructure is up to standard and we are poised for industrial and manufacturing growth, companies looking to site facilities are going to know they have a good partner here in state government. Pennsylvania's transportation package is helping to put us in game-ready position."

"If you talk to some of our folks who haul oversize loads, permit loads, it's somewhat cumbersome to get through the state because of the number of (weight limited) bridges," says Schoch. "So this continual investment over time will make us more attractive to these companies that are coming to Pennsylvania."

Act 89 helps create jobs and expands the state’s ability to compete globally, but at a local level, it also helps ensure the safety and wellbeing of those who use that state’s highways and public transportation.

"Governing wisely carries with it a moral obligation for public safety that is embedded in the transportation issue," concludes Denlinger. "Transportation infrastructure is a core responsibility of government. Leaders who embrace that simple fact have taken the first step toward making good long-term decisions for the benefit of those they serve."