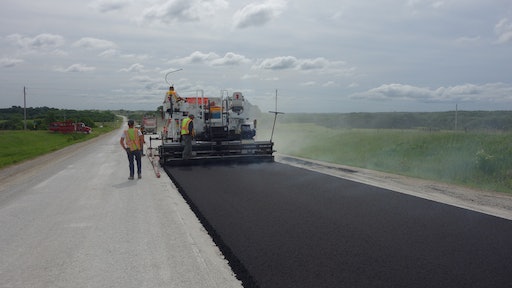 Norris Asphalt Paving had an 11-person crew on the six-week Iowa Highway 92 project, which began at the end of May 2014. The company was responsible for the paving portion of the highway rehab.

Resurface 16.037 miles of Highway 92 in Iowa - with the expectation that the highway road surface will last 20 years.

The approximate 25 miles  of Iowa Highway 92 between Winterset and Greenfield, Iowa, sees an average 1,365 cars travel that highway road surface daily. The highway was lasted worked on in 1994, so the Iowa Department of Transportation let the contract for a 16.037-mile road-resurfacing project. I-DOT expects to see a highway road surface last 20 years. I-DOT selected Norris Asphalt Paving Co., Ottumwa, Iowa, for the asphalt-paving portion of the project. The Sheldon G. Hayes Award-winning paving contractor used its new Roadtec RP-195e for the paving project and was able to achieve impressive profilograph-measured 12.61 to 12.9 International Roughness Index (IRI) scores.

Norris Asphalt Paving had an 11-person crew on the six-week Iowa Highway 92 project, which began at the end of May 2014. The company was responsible for the paving portion of the highway rehab. The stretch of Iowa Highway 92 is 28-feet wide — two 14-foot lanes. Plus, the highway was widened two feet on each side.

Norris subcontracted the milling and roadbed prep work. A 4.6-mile stretch on the east end of the project posed a challenge because it had a concrete underlayment. For the contractor to mill the on-average 4.5-inch depth, Norris Asphalt had to close the stretch to traffic for 17 days.

“The rest of the highway project was milled cold-in-place with traffic flow maintained throughout construction,” said Bob Mobley, paving superintendent, with Norris Asphalt Paving Co. “The milled asphalt was recycled — we used 20-percent RAP in our hot-mix asphalt (HMA) mix.”

For the highway project, Norris Asphalt laid 12,230 tons of HMA for the base lift and placed 24,840 tons of asphalt for the intermediate and surface layers. An additional 7,500 tons of HMA was used for the widened roadway shoulders.

“Our paving on this project went quite well,” Mobley said. “We were using a new machine — a Roadtec RP-195e, which is a powerful, rubber-track paver made for highway work.” Mobley likes the way the paver steers with its joystick steering and prefers the heavy 40-foot drag screed to no-contact screeds he’s seen on other machines. He mentioned that the dual operator stations can move out beyond the sides of the machine to give the operator a clear view down the sides of the paver. And he likes that the machine is a tread paver.

“Unlike wheel pavers, we get stability even when laying down asphalt on 3-inches of choke stone,” Mobley said. “We get more uniform results with a track paver and there’s a smoother ride as a machine operator. The RP-195e has exceptional rideability.”

The better than 16-mile stretch of Iowa Highway 92 is but one chunk of the 275-mile state highway that runs from east to west across the state. The work that Norris Asphalt Paving Co. performed on the project was subject to the Iowa DOT’s Quality Management - Asphalt (QM-A) program, which holds the contractor responsible for mix design, sampling, testing and making mix adjustments if necessary. In other words, contractors assumed start-to-finish responsibility for the product they produce and place.

When asked how they were able to achieve, what many would consider, exceptional IRI scores on the finished paved surface, Mobley said: “Superb paving machine and darn good crew!”

For the I-DOT officials signing off on the work, there is a confidence that the highway section is good to go for at least a 20-year life.