When steel wool is heated inside asphalt, it produces a road that can heal itself. 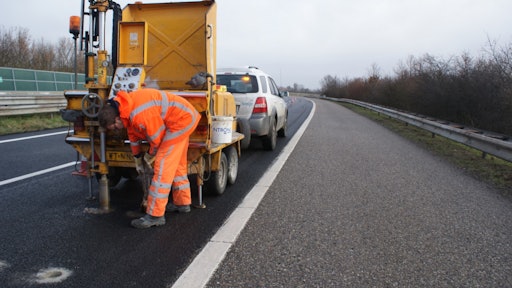 After the test strip was paved, 120 cores were drilled from the road for lab testing where they would heal the road after each test.

The development of porous asphalt pavements was a big innovation in the industry. Theses surfaces improve safety while also decreasing the sound pollution when cars drive on it.

However, this type of pavement has a reputation for raveling as the amount of binder in between the aggregate has been reduced so that water can flow through it. Weather, UV rays and oxidation shrink the binder even further which results in aggregates breaking free, causing potholes.

Potholes cause problems. It’s estimated that the average American driver incurs $377 annually—$80 billion nationally—in operating and repair costs for their vehicles because of the shape of our roads. A recent estimate from the American Society of Civil Engineers shows that combined, the economic losses of decaying roads, bridges and other infrastructure zaps $129 billion per year from federal coffers.

But what if this pavement could heal itself, eliminating the need for crews to go out and patch potholes or place overlays after a few years? That’s what Erik Schlangen, civil engineering professor at Delft University of Technology and his team of researchers sought to develop.

Having originally worked in concrete, Schlangen started on asphalt in 2008 after receiving a grant from the Dutch government. He describes the relative ease of testing asphalt compared to his old material. "It's much harder to test concrete," he says, "since you can't just make a bridge as an experiment and tell people to drive on it. With roads it’s much easier, because if it doesn't work, you just take it off."

They took a simple household product, steel wool, cut it up into small pieces and placed it into the bitumen. This results in an asphalt pavement with very small pieces of steel wool inside. But what does that accomplish? Well, nothing until you add some heat.

Turning up the heat

Schlangen and his team place induction technology over this asphalt and heat it up. When the steel is heated inside the pavement, it re-melts the bitumen so it can flow into the micro cracks. The stones then bond together once again. Take the heat away, and the bitumen cools, mending the asphalt as it goes.

“Only the bitumen is heated by the 'hot' fibers,” Schlangen says. “The aggregates should stay cold in order cool the material down again more quickly. In that way the cars can use the road shortly after the treatment.”

Schlangen's self-healing asphalt is still in testing phase and has been applied to five strips of road across the Netherlands. Once paved, his team took core samples from these roadways and conducted aging, loading and stress tests on them in their lab. After each test, they would heat and “heal” the asphalt with the induction machine then repeat the tests again.

At this point, Schlangen was confident this type of asphalt could extend the pavement life two-fold.

His lab then developed a special vehicle that passes induction coils over the road to heat up the material to repair the surface. Schlangen says transportation workers would only need to run the machine every four years or so over this type of pavement to repair small damages and prevent potholes in the road.

Dutch officials have estimated roads with this asphalt mix can last up to 30 years and that the technology (which they've funded in part) could save the country over $100 million annually.