Material Transfer Vehicle helps Knife River finish a two-year interstate repaving project in one construction season and achieve International Roughness Index scores of 29, which was 26 points below that highest acceptable level for the project 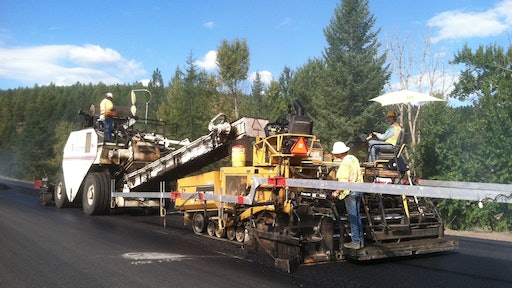 The Montana I-90 rehab project required a total of 165,000 tons of HMA with approximately one-third of that being RAP. Knife River placed three lifts. The bottom lift was three-tenths thick and the top two layers were each 15-hundredths.

Renovate a 10-mile section of interstate including shoulder-to-shoulder rotomilling to three-tenths of a foot, converting milled material to RAP and repaving to meet incentives and bonus opportunities as well as a continuous paving schedule.

Knife River had eight employees assigned to the $15.5 million road project, which commenced on June 10, 2014 with Knife River’s subcontractor Industrial Builders, Inc., Bismarck, N.D., performing the shoulder-to-shoulder rotomilling of the road to three-tenths of a foot. The drive lane and passing lane were milled out an additional three-tenths for a total of six-tenths of a foot. The milled material was converted to Reclaimed Asphalt Pavement (RAP).

“When we first looked at this project I knew we had to be aggressive in our work schedule and that we had to achieve consistent smoothness with each lift that we placed,” said Lance Streeter, general superintendent with Knife River Corporation’s Western Montana Division, headquartered in Bismarck, N.D. “The payment incentives that MDT offered were very attractive and within our capabilities to achieve.”

The bonus incentives offered by MDT were based on achieving paved finished surfaces with favorable International Roughness Index (IRI) scores:

“I knew that in order to achieve a low IRI index throughout the job we needed continuous paving with thoroughly mixed HMA at the right temperature,” Streeter said. “I knew that in order to achieve that we’d need to use a Shuttle Buggy. The Shuttle Buggy was instrumental in ensuring continuous paving, and it reduced our trucking costs since the trucks could dump their loads and return to the plant, which was located about 23 to 28 miles away.”

Knife River used a two-dump-truck train for asphalt hauling. The lead belly dump had a 26- to 28-ton capacity and the connected pup had a 12- to 14-ton capacity. The Shuttle Buggy used a windrow pickup head to add the hauled HMA to its dump hopper.

The Montana I-90 rehab project required a total of 165,000 tons of HMA with approximately one-third of that being RAP. Knife River placed three lifts. The bottom lift was three-tenths thick and the top two layers were each 15-hundredths.

“The Shuttle Buggy was key to ensuring our quality on each lift,” Streeter said. “It was interesting that as our MDT inspectors began to see the quality we were achieving we started seeing more and more visits from other MDT officials outside of our team — they were very interested to learn how the MTV was helping us.”

The project required cooperation and coordination to maintain uninterrupted paving. In addition to the steady delivery of HMA from the asphalt plant, there was the removal and replacement of 60,000 lineal feet of guardrails.

“Our sub, Mountain West Holding Company, based in Missoula, Montana, had all six of their punch trucks working,” Streeter said. “They did an incredible job of pulling guard rails in front of the paver and then replacing them after the paver — it was poetry in motion.”

The Montana I-90 project, which started in June, was completed October 28, 2014 — a full year ahead of schedule. In addition to an early completion, Knife River Corporation also achieved an average IRI index score of 29, which gave the company the highest incentive payment for finished pavement smoothness. For its efforts, Knife River earned $605,000 in bonuses.

“This project was a totally coordinated effort among everyone connected with the project,” said Streeter. “We created a smooth, very rideable, surface — probably among the best I’ve ever seen. Our crew, subcontractors, and the Montana Department of Transportation (MDT) inspectors all worked seamlessly together giving us the efficiency, thoroughness and quality results we were after."

In looking back at the project, Streeter credits the Shuttle Buggy for helping them achieve the quality of paving and for production savings.

“With our Roadtec Shuttle Buggy, I estimate that we easily saved $165,000 in our trucking costs alone,” Streeter said. “There were no delays. Our belly dump train could unload and leave right away.”

The quick turnaround of the haul trucks helped maintain the aggressive production pace that Knife River set. Early in the day, Knife River would pave at a rate of 450 ton per hour and slow the pace down to 350 ton per hour toward the end of the day because they were outstripping the asphalt plant’s production.

“The key to our success on this job was the ability to keep our paver continuously paving with homogenously mixed HMA at the right temperature,” Streeter concluded. “The Shuttle Buggy made it possible. It gave us the production consistency that made the difference to this 10-mile stretch of I-90 between the Alberton Interchange and the Huson Interchange.”

Jeff Winke is a business and construction writer based in Milwaukee, Wis. He can be reached through http://jeffwinke.weebly.com.