With Echelon Paving, GingerMan Raceway Gets the Green Flag 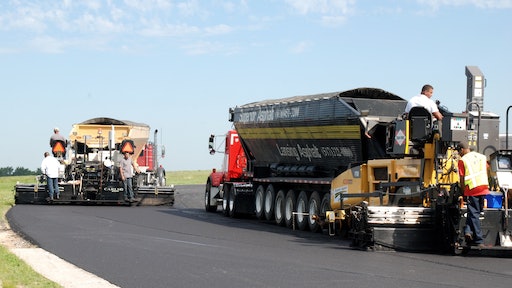 Located in the lakeshore town of South Haven, MI, GingerMan Raceway was established in 1995 by racing enthusiast Daniel Schnitta. Designed to feel like a state park, the racetrack rests on more than 300 acres of land that includes sprawling areas of a shaded wood, plenty of paddock space and a pond stocked with fish.

GingerMan Raceway is dedicated to the safety of the driver. The course layout was designed to minimize damage to both drivers and their vehicles and is considered among the safest tracks in the nation.

In January 2014, Schnitta contacted Superior Asphalt, headquartered in Grand Rapids, to evaluate the track. Originally paved in 1995, the track pavement was intact, but there were 1 ½-inch cracks that had been filled with rubber crack seal.

“When we decided it was time to repave our 20-year-old race track, we went looking for a west Michigan asphalt contractor not only willing to take on the magnitude of our project but who would be willing to work with us,” says Mary Phelps, managing director of GingerMan Raceway. “There is no guidebook on how to build the best and fastest racetrack. Every track is unique.”

After the initial meeting with one of Superior’s estimators, Dave Van Putton, Phelps says they knew they had found the right contractor.

“Dave brought in the entire team – Superintendent Rick Browley Sr., his son and Lead Crew Chief Rick Browley Jr., and Lab/Quality Control Supervisor Nate Voruganti – to collaborate with us,” she explains. “We spent months researching and analyzing the best materials and approach to successfully complete the racetrack within the confines of time and our budget.”

It was decided that echelon paving would be the best method to minimize future cracking issues. Before paving began, Superior prepared the track by milling ½ to ¾ inches of the surface and patching the cracks with a 1 ½-inch overlay transverse to roadway. “This was done to make sure the rubberized crack fill would not cause any problems in the future,” says Rick Browley Jr., lead crew chief.

A GlasGrid mesh was also used over the cracks for additional reinforcement. These reinforcement grids are designed to retard reflective cracking by turning crack stresses horizontally to dissipate the stress. A tack coat was also applied prior to paving.

With the racetrack’s long history of cracking issues and uneven seams, echelon paving was used to eliminate any joints.

The mix was specifically formulated for this racetrack, says Nate Voruganti, lab/quality control supervisor. It consisted of a 19mm nominal maximum aggregate, 60% limestone (+1/4” upsize) and 40% manufactured sand specialized for a racetrack. The liquid binder was PG70-28PW/SBS polymer 3-5%; the polymer was used for added strength.

“Limestone was used as an extra grip to help keep the tires on track and reduce the wear of the tires,” says Voruganti.

The limestone was purchased from Port Inland Limestone in Michigan.

One 2-inch lift of asphalt was placed on the racetrack. Compaction was completed with three rollers: two Ingersoll Rand and one Volvo compactor.

In the end, the project was completed in three days: day one for milling, day two for tack and crack patch, and day three for paving the entire track.

The greatest challenge for Superior Asphalt was the fact that this was the company’s first-ever racetrack paving job.

“There isn’t a lot of consistent data available on how racetracks have been constructed and maintained in the past,” says Browley Jr. “We were in unknown territory and spent months on research and development. We worked continuously with the GingerMan staff to ensure that they would get the track that they were looking for within their timeframe and budgetary requirements.”

The rubberized sealant that had been used in the past presented a challenge as well. “Often if paved over without proper prep, cracks will resurface and create bumps,” he says. “This is why we patched with fine grade asphalt and used the GlassGrid.”

Other challenges of the project included having trucks backing in around the racetrack and maintaining a constant paving speed of 10 to 12 feet per minute to minimize handwork.

“Constant monitoring of depth was a must too,” says Browley Jr. “The track had to be sloped perfectly to alleviate any standing water.

“The goal was the smoothest and safest ride possible for the drivers,” he continues. “We accomplished this by using Topcon full automation.”

With its first racetrack paving project completed, Superior Asphalt has heard nothing but positive feedback for their efforts.

“The track has been well received,” says Phelps with GingerMan Raceway. “Our drivers have been setting records and doing so safely. They are excited to drive on the new asphalt. The motorcycle riders are especially thrilled with the new surface.”

The project was also a collaborative effort on a personal level. Rick Browley Sr., superintendent of operations, and his son, Rick Browley Jr., worked together as paving crew chiefs on GingerMan Raceway. Browley Jr. credits his father’s expertise for such a strong result on Superior Asphalt’s first racetrack.

“To work next to him on this kind of project is one of the best accomplishments I’ve ever had,” he says. “It’s a job full of pride and joy.”

Another positive aspect of the project – the long-lasting relationship that has been formed between GingerMan Raceway and Superior Asphalt.

“The Superior team is still working with us perfecting and maintaining the track,” says Phelps. “We are in constant contact regarding the track’s performance and what improvements should be made. We truly feel as if we are partners with Superior Asphalt on this project, and we’re looking forward to working with them on other projects.”

Browley Jr. agrees, adding, “Through the process we all became friends, and the project became a labor of love for all involved. We are two companies passionate about our trades, and failure was never an option. It doesn’t get any better than that.”