Paving a Small Town in Asphalt 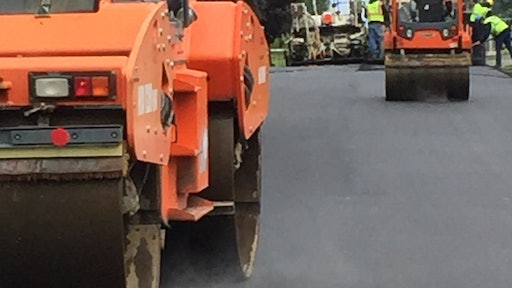 Christopher Columbus was a man with a vision. Meriwether Lewis and William Clark were men with a vision. Brian Devick, mayor of Woodward, IA, is a man of vision. The citizens of this small, central Iowa town will be benefiting from this vision for decades to come. In the summer of 2015, the vision of Devick and the Woodward City Council was completed – they paved the whole town with new asphalt streets.

Devick was elected Mayor of Woodward in 2012 after serving on the city council previously and working on the Planning & Zoning Commission both in Des Moines and Dallas County.

"I remember being at an early city council meeting when one of the citizens, very angry at the time, shouted at the council, 'If you are going to spend money on anything in this city, fix the damn streets!' That really struck me and I never forgot it," he says.

In the fall of 2013, Devick and council members began researching the possibility of paving the city. They began with doing the right leg work: they called a local contractor and member of the Asphalt Paving Association of Iowa (APAI), Des Moines Asphalt & Paving (DMAP), and asked for a budget price to put two inches of asphalt over all their streets.

In early 2014, they invited the estimator from DMAP, along with Bill Rosener, execcutive vice president of the APAI, and Tony Bellizzi, vice president of Veenstra & Kimm (V & K) Engineers and City of Woodward Engineer, to a fact-finding City Council meeting. The meeting allowed the city councilmen to ask myriad questions that concerned them.

The meeting ended with a consensus – the project should be professionally designed. In June 2014, the city sent V & K a contract to design the town’s paving project with special emphasis on improving drainage. While Bellizzi and Co. began work on the plans, the Mayor and City Council took the plan to the streets and asked the citizens for their input.

The City of Woodward is a typical small town in Iowa. The city has a population of 1,400, including the State Hospital which accounts for approximately 350 residents.

It has 400 households, with approximately 30% of the residents of retirement age combined with a strong group of young families.

"This is a blue collar town, we’re not a wealthy town by any stretch of the imagination,” says Devick. “We are primarily residential. Our two biggest commercial business are the hospital and the school, both of which are tax exempt."

In the Fall of 2014, Bellizzi presented the initial findings with a draft plan for overlaying the city’s streets and addressing the drainage issues. The project called for overlaying the existing sealcoat streets with hot mix asphalt (HMA) at a depth of three to four inches, strengthening pavement edges with HMA base repair, three linear blocks of concrete curb and gutter, 172 handicap ramps, storm sewer, culverts, ditch improvements, and a large 8' x 5' box culvert.

"We cut a lot of cores in the existing streets to determine what type of structure we had,” says Bellizzi with V & K Engineers. "The city had made an investment in their chip seal streets and a strong rock base. We were able to use an asphalt design that we have had success with in many small towns. With a good base and good drainage, we were comfortable specifying a three to four inch overlay. We can add structure or do a mill and fill operation in the future. They have the basis of a perpetual pavement design. It will serve the taxpayers for decades to come."

As with all things, the Woodward project came down to money. V & K estimated the job at $3.2 million: $1.4 million for drainage remediation and $1.8 million for the base repair, curb and gutter and paving. The mayor and council went to work.

Mayor Devick is a believer in his city. He is also a pragmatic man. Woodward could not put itself into a financial hole with this project. He discussed the city’s expenditures on the upkeep of the sealcoat streets with Woodward’s Public Works Director, Chris Newland.

"In the 10 years previous, we spent upwards of $640,000 on maintaining our seal coat streets. It was not sustainable,” says Newland.

The city of Woodward had just finished paying off a bond for the rehabilitation of Main Street. The bonding capacity offered them $1.8 million at historically low interest rates, the remaining $1.4 million came through a private loan against future Road Use Tax Funds.

"To do this project piece by piece would have been too costly," says Devick. "I told our citizens that asphalt will never be cheaper than it is right now."

By extending the bonding capacity and rededicating the dollars spent on yearly maintenance of the sealcoat roads, Woodward was able to fully fund the project without raising the taxes of the citizens. The project letting was set for the spring of 2015.

Grimes Asphalt and Paving Corp was the low bidder on the project with a bid of $2.9 million. The project was divided into five phases to limit inconvenience to the townspeople. Drainage work began in early May with two crews getting the project ready to pave.

"We had some complaining to start with,” says Newland. "But that quit as soon as the paving started."

“We had to do a lot of coordination on this project," he says. "We handed out notices when we would be working on their streets. The people of Woodward are very nice and appreciative. We did a smaller, similar project for the Metro – I took 20 calls a day on that job. We have paved this whole town and I have had four calls to date."

Of course, not every project is perfect. "You are always going to have some issues," says Bellizzi with V & K. "There was a lot happening here all at once. The big benefit of asphalt is that you can open the streets as soon as you are done paving. You can’t do that with concrete."

The project was completed near the end of July. Over 20,000 tons of asphalt were placed. Residents are pleased with the outcome.

"I’m very happy with the streets," says Woodward Resident Deb Gilbert. "It’s great to see all the kids come out with their bikes, skateboards and roller skates as soon as the road was finished."

The three men are pleased with how the vision that was created has become a reality.

"I’m extremely proud of this project," says Devick. "We were able to address the number one issue in this town without raising our citizen’s taxes. This is how a city should do a project - we are getting the best product, the best pricing and the best quality."

Wise words spoken by a man of vision.