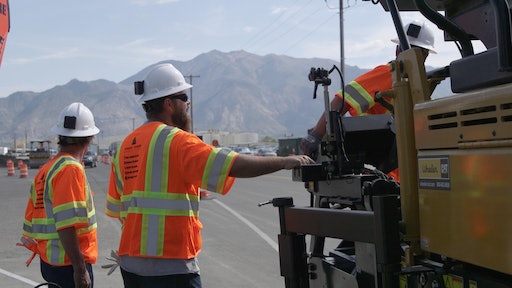 Every day, highway and street construction workers are at risk of fatal and serious nonfatal injury when working in the vicinity of passing motorists, construction vehicles and equipment.

Each year, more than 100 workers are killed and over 20,000 are injured in the highway and street construction industry, says Lee M. Cole, vice president, Environment, Health & Safety, at Oldcastle Materials.

Intrusions occur when an unauthorized vehicle or pedestrian enters into a designated work zone due to speed, distraction, alcohol, drugs or simple confusion.

Oldcastle Materials, a national supplier of aggregates, asphalt, ready-mix concrete, and construction and paving services in the U.S., is committed to being a leader in safety for its employees.

From the fall of 2012 to the spring of 2013, Oldcastle Materials lost four member of its work family in different areas of the nation due to distracted driving. Three of those four employees were lost within an 18-hour period.

“Their loss had lasting effects on our family members at work and those family members at home,” says Cole. “As with all such fatalities it was devastating to everyone. Some of our workers left and vowed to find work in a different industry, a safer work environment.

“At that time we realized that we had to do something different,” he continues. “We needed to think outside the box. We had great safety best practices that extend beyond compliance with the rules and regulations but we needed more. We needed to combine our human efforts with cutting edge technology.

“We needed a system that was always vigilant, always working, and never fatigued,” he says. “We needed to invest in the lives of our employees to make as safe a work environment as possible.”

In response to the company’s efforts to find a better way, Oldcastle’s team created the AWARE System.

“The system detects a threat by determining speed, position, trajectory, and stopping distance, therefore providing valuable seconds that could save lives of the workers and the motoring public,” says Cole.

The AWARE system is a radar-based system that can detect a potential work zone intrusion from multiple vehicles, and, simultaneously, warn the errant driver and workers who may be in harm’s way, says Nathan Creech, president of the Southwest Division of Oldcastle Materials Inc.

The system consists of a sensor that includes electronically-scanned radar, high-precision differential GPS, accelerometers, gyroscopes and magnetometers for position and orientation sensing, explains Creech. High-definition video and several wireless interfaces are used to monitor traffic in the area. All of this is to broadcast a warning when an intrusion is detected.

The initial pilot project that used the Oldcastle’s AWARE System was in Missouri. Cole says based on the experience in Missouri and another project in Texas, the company was able to make improvements which brought the system to become fully functional on a divided highway project in Texas last year.

“From what we learned on those early projects, we have made over 100 enhancements to the system and significantly improved how it works,” says Cole. “Now, we need to focus on making the system user-friendly so our supervisors can utilize it without external assistance.”

The company plans to test the system on 12 more projects across eight states in 2016.

“Our goal is to have this system available to all our road crews by 2017,” says Cole.

“There is no doubt that this system will save lives in the future,” he continues. “We are not concerned how this affects our bottom line. We have a major investment in this system now and have done so for the sole purpose of providing a safer work environment for our most important asset, our employees.”

In addition to the AWARE System, Oldcastle Materials employs daily best practices to keep its workers safe in the work zone.

Safety best practices is a top-down value, meaning management needs to be all in and supportive of the philosophy.

“At Oldcastle, we expect management to not only support the best practices but also to encourage more innovation/ideas from our workers to provide additional tools to use in defense of work zone intrusions,” says Cole.

When it comes to keeping workers safe from work zone intrusions, training is top of the list.

“First of all, workers need to make sure they receive the proper training before they work on any project,” he says. “Education regarding the risks and how to mitigate those risks takes time. Do not send a novice out to the road construction project too early.”

Second, everyone needs a mentor, another worker to watch out for us, says Cole. “Fatigue and complacency are major contributors to fatalities involving distracted driving. We need to do whatever we can to defend against these conditions.”

Because training is a top priority, it needs to be ongoing through daily safety meetings, risk assessments and true-to-life stories.

“Risk assessments are conducted at the beginning and throughout the day when conditions change,” says Cole. “We believe the best practice approach takes us beyond compliance – beyond the rules and regulations. We believe compliance is just the foundation upon which best practices provide the walls and roof of protection that saves lives.”

Oldcastle Materials offers a manual on Best Practices for Mitigating Work Zone Intrusions to all of its crews to cover all aspects of work zone safety and maintain a consistent safety message across the company.

The distracted driver is the #1 risk for highway workers

Cole offers up these sobering statistics obtained from a poll of more than 2,800 American adults: