Taking an EPIC Approach to Safety 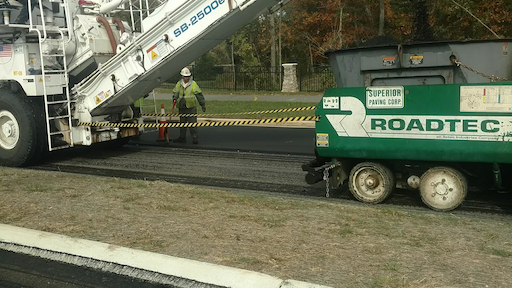 Each year, more than 50 highway workers are killed and thousands more injured when struck by vehicles or equipment at road construction sites. In addition to the risk of injury from passing motor vehicle traffic outside the work zone, there is an equally hazardous risk of injury from movement of construction vehicles and equipment within the work zone.

Each day, asphalt contractors face this challenge when they are working with a material transfer vehicle (MTV). For workers on the ground, it’s very convenience to walk in between the MTV and the paver when you’re trying to get the job done. Not only is that inefficient, as it can cause machine delay, it’s also very dangerous for the workers.

“This was a long-standing problem for us,” Todd Atkins, safety director with Superior Paving Corp. says. “We tried to put rules in place and put safety policies around keeping people out of that area, but if it’s open and available, people will take the path of least resistance to get to where they need to go on the jobsite.”

The EPIC system creates a physical barrier that prevents crew members from walking between the paver and the MTV.

The system consists of two retractable 65-foot-long, 4-inch-wide tape that mounts to the MTV. A magnet connects the extended tape to the paver, creating the physical barrier that limits entry to the space between the MTV and the paver. The tapes are also self-adjusting so as the machines move, the tape length adjusts accordingly.

“By putting up this physical barrier, workers have to make a conscious decision to either raise or lower the tape before they enter this protected location,” Atkins says. “That creates a moment in their mind where they have to physically raise or lower the barrier and decide whether or not they are going to walk between the machines. We hope that triggers something that makes them say ‘hey, this may not be the best place for me’ and they’ll decide to walk around instead.”

While Superior never encountered a safety incident tied to people walking between the machines, they knew it was only going to be a matter of time before someone got hurt.

“If you have a 40,000-lb. machine running in the front with a 20,000-lb. vehicle running behind it and an employee in the middle, you know who is going to lose that battle every time,” Atkins says.

Walking beneath the loading conveyor on an MTV is a can also disrupt the infrared connection between the MTV and the paver.

“If the infrared beam is broken, it makes the speed of the machines unpredictable,” Atkins says. “But before that infrared technology was available, this was a problem for us. We knew that was an area we didn’t want people to be and this is the best way to keep them out,” Atkins concludes.

Atkins says the system was very cost-effective and easy to install, taking around two hours to complete and costing around $1,500.

The system is already gaining traction in the industry with other contractors understanding the need for something like this. The EPIC Systems was also awarded the 2017 Asphalt Operations Safety Innovation Award from the National Asphalt Pavement Association.

Safety from Top Down

Being a family owned company that has been in business since 1976, Superior Paving, located in Gainesville, VA, knows that keeping their workers safe means listening to their needs.

“We know the best ideas come from the people behind the cones,” Atkins says. “The people who are out there doing the work every day know how best to protect themselves. We get input from the crew in the field and representatives on our safety committee meet and develop these initiatives.”

Atkins says the Superior Paving safety committee receives support from the top down with the company CFO serving as the committee secretary for the last five or six years.

“The executive team is always active, they understand the challenges and push people to bring new ideas to the team each month,” Atkins says. “With the EPIC Safety Systems installed, crew safety between the MTV and the paver isn’t something we that consumes time and worry for us anymore and we can go look for the next issue we can solve.”

Use Headphones on Construction Sites? OSHA Clarifies its Position