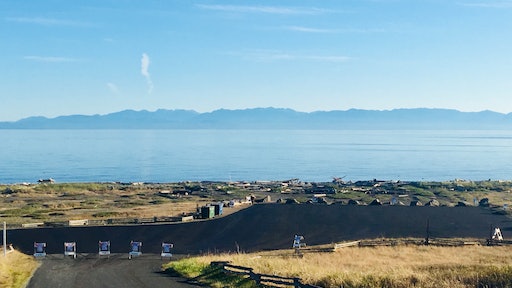 Logistically planning the mobilization of equipment, crews and materials across the waterways to reach the San Juan Islands was a challenge for VSS International.

When you're tasked with completing construction work on an island, planning is key to project success. This was particularly true for the crew at VSS International who recently completed asphalt patching and installation of a Type II slurry seal on San Juan Island, WA.

The San Juan Islands are an important tourist destination, with sea kayaking and orca whale-watching (by boat or air tours) being two of the primary attractions. At mean high tide, the archipelago comprises over 400 islands and rocks and over 478 miles of shoreline. And since there are no bridges to the San Juan Islands, all travel from the mainland is either by water or by air.

The section of roadway in need of repair inside the San Juan Island National Historic Park, exhibited oxidation, raveling and cracking on the pavement surface, as well as isolated structural failures. The area to receive treatment was just over a mile long and the construction schedule had to be in place and approved weeks before work began to allow visitors and workers ample notice of any street closures or delays.

In the busy summer months, there are a shortage of reservations to get access to the ferry – especially for large construction equipment. This means VSS needed to get started early and precise planning was the only way to meet the construction schedule.

Once all of the preparatory activities were completed, it was time to begin the placement of the Type II slurry seal. This responsibility required logistically planning the mobilization of equipment, crews and materials across the waterways to reach the San Juan Islands.

First, the aggregates had to come across on the ferry in order to create a suitable stockpile. The materials had to be tested and approved for placement by FHWA prior to the project starting. Over a period of two weeks, the aggregate supplier (Granite Construction) and the trucking subcontractor (OMA Construction) completed this slow and painstaking task. 500 Tons of Type 2 aggregate made the two hour journey from the quarry in Granite Falls, WA to Anacortes, WA. Once there, they waited an hour or longer for an additional 1.5 hour ride on the ferry before finally reaching Friday Harbor on San Juan Island.

Once the stage was set for the slurry crew; they then had to make the pilgrimage. The crew was coming off of a large maintenance project for the city of Seattle and had specific times to get across the ferry throughout the day before the slurry operations were planned. The crew hit on all cylinders to make the trip a success.

VSS chose to utilize ‘Macropaver 12E’ Units on this project.These particular machines incorporated Caltrans approved material monitoring and control systems to ensure correct proportioning of all materials. After inspection of the equipment, the crew was allowed to proceed into the park to complete the work.

The principal materials used to create a slurry seal are crushed aggregate, asphalt emulsion and fillers such as Portland cement, which are mixed together on the project site according to a laboratory designed mix formulation. The asphalt emulsion serves as a binder, holding the crushed aggregate together, and adhering the new slurry surfacing to the old surface over which it is being applied. The aggregate must be clean, durable and properly graded to meet the specifications.  Typical gradation categories for slurry seal are Type I, II & III. Type I being the finest grade to the Type III being the most course. This project was specifically designed with a Type II aggregate.

What set this slurry seal apart from typical slurry seals was the requirement that the materials be placed alongside cooler coastal conditions found on the island. The mornings on the island typically has a heavy fog that would normally delay the cure of typically slurry seal product. The selected areas were heavily shaded which amplified the challenges.

VSS International’s Technical Group was able to engineer a formulation that would allow the slurry seal product to meet both the placement and performance challenges required by this contract. The finished product was high performance slurry seal material that would allow the product to set and cure quickly. The materials were engineered to allow cross traffic on the new mat within 8-10 minutes at traffic sensitive areas.

Aside from the use of quality materials and an approved laboratory formulation, the timing of a slurry seal treatment is critical with regards to overall cost, effectiveness and long-term success. A new slurry seal must be placed while the road is still in fair to good condition on the pavement condition index curve.

The slurry seal was completed quickly and efficiently over the period of two working days. There was a 1.5 mile section of roadway that was included in the project as well as multiple campground/parking areas. The campgrounds/parking areas were notified in advance of full closures and reopened to traffic on the same day of application. The section of roadway (Cattle Point Rd.) was controlled by pilot car during construction.

After the slurry was completed, the FHWA specified a 2-4 week maintenance period of post sweeping before markings and painted lines could be completed. Slurry seal will ravel slightly after the initial placement. It is not uncommon for agencies to specify post sweeping in order to assure any ravel is swept up during the cure period.

After two weeks, the project was post swept utilizing a power broom. Following the post sweep, the markings and painted striping was placed and completed over two working days. The project was quickly inspected by the National Park Service and accepted.

The remote location of this project and logistical planning required made this project challenging. The team at VSS Inernational rose to the challenge. The project was completed quickly and efficiently to the satisfaction of the stakeholders of the National Park.