A 7-mile stretch of roadway was repaired using the process, saving a month of construction time and over $2.5 million in costs 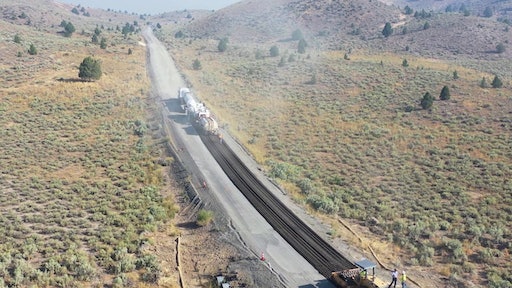 Using foamed asphalt for this project saved over a month of construction time and $2.5 million from a more traditional method. And while coming in under budget was important, the amount of time the roadway was down to traffic was really what mattered for the project.

Contractors and agencies alike know that completing work they’re not used to doing on a road repair project can be risky. Many times, however, that risk is rewarded when a project is completed ahead of schedule and under budget because all parties involved were willing to try something new.

In the case of the Juntura Cutoff Road project in state of Oregon, the Oregon Department of Transportation (ODOT) was rewarded to the tune of $2.5 million by using foamed asphalt for the first time to repair the roadway.

“We estimate the project saved over a month of construction time and $2.5 million from a more traditional method,” Tom Strandberg. ODOT Region 5 public information officer says. And while coming in under budget was important, the shorted construction time was really what mattered for the project.

The Cutoff Road connects EP Minerals Diatomite Mine, west of Juntura, with U.S. Highway 20, over which trucks transport the mineral to a plant west of Vale where it is processed. Because of the heavy truck traffic over several years, the road was completely falling apart and needed to be rebuilt.

“Heavy truck traffic from the mine had led to a badly deteriorated roadway,” he says. “There were large potholes and a failing asphalt surface that needed to be fixed. The foam-treated asphalt process mills, then treats existing material for use as base material. The biggest advantage with the foam treated asphalt process is that it uniformly coats the existing material with oil, which increases strength of the base.

State, county and company officials had been working on a funding package to pay for needed repairs since 2016. The estimated cost of the project was $6.7 million, and a combination of state, local and company money was cobbled together to pay for the project.

In order for the roadway to receive the green light for repairs, the state decided to use hot in-place recycling with foamed asphalt to keep the project under budget. This project marked the first time ODOT used the method in the state.

The preliminary design for the roadway was completed by Anderson Perry in the Fall of 2017 who worked with Ferguson Surveying and Engineering to complete the full roadway design. A pavement consultant, Mike Anderson, was brought in as the brains behind the foamed asphalt portion of the project.

"The project was located in a very rural area, very far away from urban centers or material sources," Andy Lindsey, PE, senior engineer at Anderson Perry says. "Our consultant, Mike Anderson, had used the foamed asphalt technique in other places and it really provides a lot of options. More structural strength and time savings were the biggest benefits for this project.

The Coughlin Company was contracted to completed the foamed asphalt process. To start, eight inches of asphalt was milled up using a Roadtec RX-900e. As that was happening, hot oil was injected into back in to the material, creating a foam which expanded in volume and covered the aggregate. This process binds the material together to form a very strong base as it is laid down, allowing traffic to get back on the road right away.

Since foamed asphalt is made on-site, the need to transport emulsion from a plant to a jobsite is eliminated.

Since this was the first time using the foamed asphalt process, Anderson Perry said they definitely had a learning curve to overcome.

"With this being the first time using the process, we didn't quite know what to expect and what to be looking for," Lindsey says. "In the future, we'd want to pay more attention to the compaction process happening behind the grinder to make sure we're getting grades and slopes correct. Once that foamed asphalt sets up after an hour or so, it's essentially ready for traffic so it's not like aggregate base where you can go back and do some fine trimming. We would definitely pay closer attention to that next time."

To finish the roadway, Oregon Mainline Paving put down 2.5 in. PG 64-28 level three asphalt. Strandberg says the mix design was chosen based on expected traffic volume and loads.

To complete the paving of the surface course, Oregon Mainline Paving constructed an Astec Six-Pack Portable Plant to make the mix in closer proximity to the jobsite.

By rehabilitating the roadway in this manner, the project is expected to add about 20 years of life to the heavily trafficked life of the road.