O&G Industries uses the power of the sun to run their quarry location in Southbury, CT 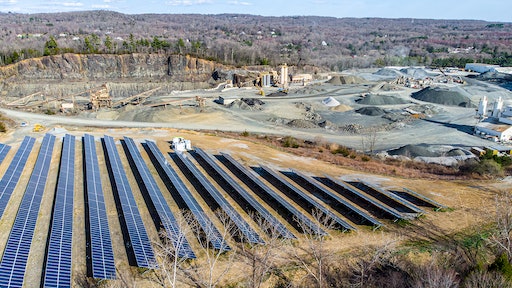 A lot of people associate the construction industry with dirt and dust so it may come as a surprise to some when they see nearly 4,000 solar panels lined up along the perimeter of the O&G Industries asphalt plant and quarry in Southbury, CT.

The company recently went live with a 1.3-megawatt (MW) solar array at its quarry on Roxbury Road using 3,762 panels to power their Gencor 4-ton H&B batch plant located here. O&G serves government, industrial commercial and residential projects as has 400 tons of storage onsite. The location produces an upwards of 20 different mixes at 210 tons per hour - all on solar-power.

The solar array sits on 5-acres and if it wasn't powering the asphalt plant, could produce enough energy to power 150 homes. The project is one of three solar projects that O&G has developed with the quarry installation being the first of its kind in the state. Solar arrays have also been installed on the rooftops of the company’s fleet maintenance facility in Torrington and mason supply showroom in Bridgeport.

“We had a strong desire to reduce our carbon emissions and energy consumption,” Brad Oneglia, head of asphalt operations at O&G says. “Working with our local supplier Eversource, we were able to attain grants and incentives that made the decision to move forward with the project an easy one.”

The installation of the panels is what proved to be a challenge for the company.

“The project was challenging from the get-go due to the site conditions,” Oneglia says. “The area of the site where the panels are installed was made up of “quarry spoils.”  These are soils with a lot of boulders and dense aggregate that are difficult to grade.”

To counter these soil conditions, O&G had to utilize special ground screws that would anchor the panels and ensure they could withstand 100-mph winds. There were also some underground obstructions that they had to work around which required the construction of a specialty junction box for the medium voltage connections.

Construction of the panels however had no impact on their asphalt plant operations.

“Being in the northeast, we shut our plants down in December and restart them for the season in April,” Oneglia adds. “That gives us a window to do maintenance while the plant is offline. We completed the construction of the solar array prior to our seasonal start up and officially brought it online March 27th.”

Now installed and running, the 3,762-panel array is coupled with a 280-kilowatt (kW) Energy Storage System (ESS) that will help to augment supply during peak demand cycles. This includes early morning hours when the sun isn’t strong enough to generate at full capacity while demand at the facility peaks with the startup of the quarry and asphalt plant operations.

The facility did also not experience any change in production or operations during this changeover.

"We did not experience any loss of production capability," Oneglia says. "The plant was operating at full capacity from the moment we went live and there was no change to the operational side of the plant other than power being drawn from the solar array."

The facility is expected to produce over one and a half million kilowatt-hours of electrical power per year, significantly cutting carbon emissions and saving the company energy.

"We installed solar at this facility as a pilot to evaluate the benefits of going solar." Oneglia says. "Once we have a full season of performance that we can evaluate, we will evaluate the opportunity at our other plants."

The solar arrays are one of many sustainable and energy saving initiatives the company has undertaken in the past year.  In New Milford and Stamford, among other locations, the company is upgrading burner controls, adding variable frequency fan drives, eliminating air leaks and installing insulation on tanks and piping at the company’s asphalt plants.  When the upgrades are completed, the plants, the first two registered in EPA’s nationwide Energy Star asphalt plant pilot program, are expected to achieve much greater energy efficiency.