Pavimental looks at mat quality with and without MTVs 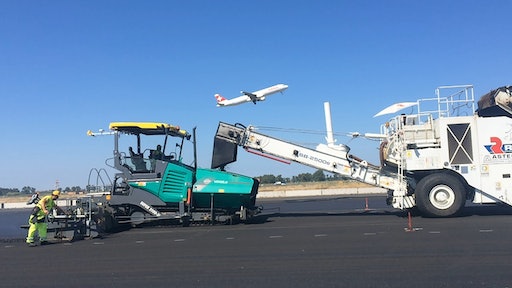 In 2007, the total traffic in Rome airports — Fiumicino and Ciampino — hit about 38 million passengers traveling to/from 150 destinations worldwide, by the 160 airlines operating in the two airports.

Rome’s airport Fiumicino or the Leonardo da Vinci Airport of Rome is Europe’s sixth busiest airport. It lies 16 miles southwest of Rome, about a 30-minute train ride away.

Rome airport Fiumicino officially opened on January 15, 1961 with two runways, replacing the small Rome Ciampino Airport, which remains in service for domestic and charter operations. During the decade Alitalia, the national airline of Italy, invested heavily in the new airport, building hangars and maintenance centers; in the same period, a third runway was planned.

A number of changes came about in the early 1970s when the two existing runways were lengthened and construction of a third runway got started.

In 2007, the total traffic in Rome airports — Fiumicino and Ciampino — hit about 38 million passengers traveling to/from 150 destinations worldwide, by the 160 airlines operating in the two airports.

To MTV or not to MTV

Before full paving production began on the project, Pavimental wanted to test whether a Roadtec SB-2500e Shuttle Buggy material transfer vehicle (MTV) can reduce thermal segregation in the hot-mix asphalt (HMA) and ensure a higher-quality finished mat. They also wished to test a VÖGELE MT-3000-2 Offset PowerFeeder MTV. The MT-3000-2 is a conveyor feeder designed to take material from the truck and transfer it to the paver.

The Roadtec SB-2500e/ex Shuttle Buggy is designed to store and transfer HMA from a truck to a paver for continuous paving. A patented anti-segregation auger remixes materials just before they are delivered to the asphalt paver. The 25-ton surge capacity of the Shuttle Buggy allows trucks to unload material immediately and return to the asphalt plant.

The Fiumicino 16L/34R runway project was less than five minutes away from the asphalt plant so Pavimental was initially doubtful that MTVs could offer benefits.

For the three tests conducted, Pavimental used MOBA Mobile Automation AG, Limburg, Germany, as an independent quality controller. MOBA used its PAVE-IR Scan to detect the thermal segregation on the recent paved test layers. The PAVE-IR Scan is a quality-control system that offers the ability to record the asphalt temperature while paving. It is designed to depict a temperature profile. Temperature differences that lead to thermal segregation of the material and, thus, to premature wear and tear of the road can be determined during paving.

The determining factor in the research test was to measure the level of thermal segregation occurring in the asphalt mat after each paving method is used. In the recent past, extensive testing resulted in Stroup-Gardiner and Brown establishing in 2000, a classification of thermal segregation and its related consequences. In the classification system, when temperature differences are below 10ºC segregation is considered nonexistent or NULL, between 10ºC and 16ºC it is LOW, between 17ºC and 21ºC MEDIUM and it is considered HIGH when over 21ºC. Therefore, the higher the measured temperature the more likely the paved surface will experience fatigue and be less durable. What all the tests clearly point out is that temperature deviations will make pavement less durable and will consequently increase maintenance costs.

MOBA used infrared scanning to examine the level of thermal segregation and the data results concluded that the finished pavement quality from each paving method show:

The collected data shows that when the Roadtec Shuttle Buggy is used the maximum thermal segregation detected is 8ºC, so the results indicate NULL segregation, while when the PowerFeeder or direct truck-to-paver methods are used the temperature differentials can be more than 20ºC at any given time. Thus, the feeder or trucked-in methods will have durability that is expected to be about half of what can be achieved through the Roadtec Shuttle Buggy, which remixes the HMA and provides continuous paving.