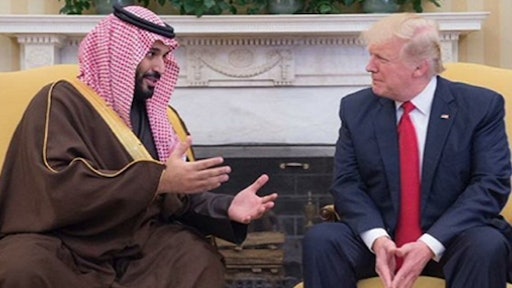 Saudi Arabia is planning to cement ties with President Trump by investing $40 billion in US infrastructure development, according to media reports.

The kingdom’s sovereign wealth fund is set to announce the plans which may be unveiled next week to coincide with Trump’s visit to the kingdom, sources told Bloomberg on Thursday.

Trump will be making his first foreign trip since taking office on 19 May, visiting Saudi Arabia and Jerusalem then heading to Europe.

According to CNBC, Saudi Arabia has been expressing an interest in investing in the U.S. for months.

“The infrastructure program of President Trump and his administration is something that we’re interested in because it broadens our portfolio and it opens a new channel for secure, low-risk yet healthy return investments that we seek,” he said.

Saudi Arabia is also eager to reset relations with the new US administration after bilateral relations deteriorated under former US president Barack Obama, who brokered a historic 2015 nuclear deal with the kingdom’s chief regional rival Iran.

At the same time, Saudi Arabia claimed a “historic turning point” in relations after Trump met Riyadh’s deputy crown prince and minister of defense Mohammed bin Salman in the White House in March.

Following Trump’s meeting with Salman, whose father is the king, the White House issued a statement saying the president supports developing a “US-Saudi program undertaken by joint U.S.-Saudi working groups” that would invest in energy, industry, infrastructure and technology.

The program would potentially be worth $200 billion in direct and indirect investment in the next four years, the statement added.

Trump has said he intends to push for $1 trillion in US infrastructure investments over the next decade, with $200 billion coming from taxpayers and the rest from the private sector.