In 2019, the most recent year for which data are available, 842 people died in highway work-zone crashes compared to 757 the year before. The 11.2-percent increase is the largest percentage increase of highway work zone fatalities since 2006. 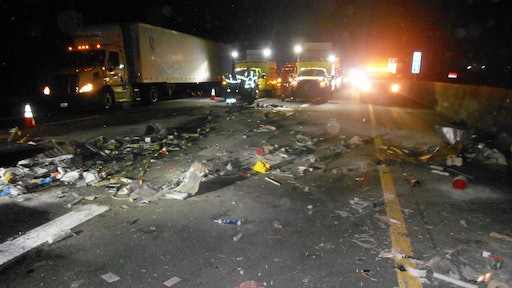 TDOT crews were called out to make emergency pothole repairs on I-24 in the Antioch area. Even with traffic control vehicles and a work zone setup, a driver in a red pickup truck with a trailer full of construction supplies slammed into the work zone at a high rate of speed. Thankfully, the attenuator behind the TDOT trucks absorbed most of the impact from the crash and no TDOT employees were hurt.

Each year in April, the construction industry claims one week out of the month as Work Zone Awareness Week. The goal of this campaign is to broaden the understanding of a driver's role in keeping workers safe. It's an issue more important than ever as work zone crashes and fatalities are on the rise.

According to the Federal Highway Administration (FHWA), 842 people died in highway work-zone crashes in 2019 compared to 757 the year before. The 11.2-percent increase is the largest percentage increase of highway work zone fatalities since 2006.

“We all have a role to play when it comes to safely repairing and improving our nation’s roads, bridges and highways,” said Acting Federal Highway Administrator Stephanie Pollack. “If you are driving and see construction work ahead – and especially workers on the job – please slow down and drive carefully.”

Crashes in highway work zones happen most frequently when drivers are not paying attention to changing road conditions. Distracted driving is a key element of many crashes, leading many drivers to crash into other vehicles, highway equipment or safety barriers.

Though highway workers are often among the victims of work zone crashes, the dangers of reckless driving more often affect those behind the wheel and their passengers. Four out of five work zone fatalities were drivers or passengers, according to FHWA data.

“The men and women fixing our nation’s highways deserve to get to work, do their job and return home safe and sound after their shift,” said Pollack. “They can’t work safely if you don’t drive safely.”

As an industry, we can do everything in our power to keep workers safe with internal traffic control plans, flaggers, signage and police officers on site to deter distracted and dangerous driving, but it only takes one second for a driver to enter a work zone and cause a catastrophic event. Making it known to the traveling public that their actions have a direct impact on worker safety needs to be a priority.

The National Highway Transportation Safety Alliance (NHTSA) estimates that during daylight hours, approximately 481,000 drivers are using cell phones while driving. That creates enormous potential for deaths and injuries on U.S. roads and the danger only increases when drivers enter unfamiliar work zones. Texting is the most alarming distraction. Sending or reading a text takes your eyes off the road for 5 seconds. At 55 mph, that's like driving the length of an entire football field with your eyes closed. Drivers should never pick up their phone to text while driving, but especially not in a work zone where there are vulnerable human beings just trying to do their job.

With today's technology inside vehicles, there is almost no reason to pick up your phone as many cars can read texts and reply to them hands-free. If you don't have this tech in your vehicle, for everyone's sake, please put your phone in the glove compartment until you park your car.

We can all play a part in the fight to save lives by ending distracted driving. Parents first have to lead by example—by never driving distracted—as well as have a talk with their young drivers about distraction and all of the responsibilities that come with driving. Have everyone in the family sign the pledge to commit to distraction-free driving. Remind your teen driver that in states with graduated driver licensing (GDL), a violation of distracted-driving laws could mean a delayed or suspended license. Teens should spread the message to their friends as well. Every commitment helps.

Lay Down the Law

With the number of work zone deaths increasing year over year, many feel it’s time we start to increase legislation and repercussions for those who violate cell phone bans while driving and look to ways to increase those bans through work zones.

Every voice counts in raising awareness of this growing issue. Everyone in the road construction industry and beyond is encouraged to join in calling on the public to pay attention, slow down, move over and potentially save a life when driving in work zones.