Longer Life for Your Mat

For every ton of asphalt paved, your reputation is on the line. Asphalt producers and paving contractors take pride in delivering a durable road that lasts for 15 or 20 years or longer. Yet, sending segregated mix to the jobsite or laying a mat with patches of segregation can ruin a company's reputation, not to mention significantly affect the bottom line. 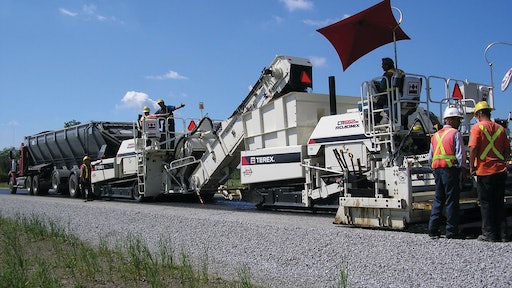 Today's new generation of MTVs lowers ground contact pressures and are easier to transport to/from the site and park once at the jobsite.

For every ton of asphalt paved, your reputation is on the line. Asphalt producers and paving contractors take pride in delivering a durable road that lasts for 15 or 20 years or longer. Yet, sending segregated mix to the jobsite or laying a mat with patches of segregation can ruin a company's reputation, not to mention significantly affect the bottom line.

No matter where segregation occurs – in the aggregate stockpile, at the plant, on its way to the jobsite or behind the screed – it must be addressed. If not, the paved road suffers distresses such as raveling, rutting and cracking, which leads to costly rehabilitation ahead of schedule.

Prior to making the mix, the way producers handle aggregate has a profound impact on segregation. Building aggregate stockpiles in layers with radial stackers vs. large conical shaped stockpiles reduces aggregate segregation, especially when it comes to larger size stone. Loader operators can also help the process by blending the material from the fine and coarse areas of a segregated stockpile.

Today's asphalt producers incorporate more additives in the mix, and they must pay attention to additive sizing and introduce these items at the right point in the mixing process. Reclaimed asphalt product (RAP) and shingles, baghouse fines and warm mix asphalt (WMA) all have their proper timing for introduction into the drum, and the mixer must have the flexibility to accommodate all the different additives.

"The drum is the ultimate commingler of the material, and that is why Terex asphalt plants have mixing zones that retain material between two and four minutes, much longer than the 45-60 seconds experienced with pugmills," says Musil. "Long mixing zones help to avoid asphalt 'balling' of fines and deliver more uniform temperatures throughout the mix when introducing RAP and shingles into the design."

When loading transport vehicles from the silo, using the three-dump method – loading two batches at each truck end and the final batch in the middle – will avoid large particle run-off to the truck's sides and ends. Also, according to Terex Asphalt Paver Application Specialist Bill Rieken, the type of truck used to transport asphalt makes significant difference in reducing particle and thermal segregation.

Rieken says that end-dump trucks are the least preferred vehicle, especially with mainline and highway paving. "A dump truck is basically a box, where more of the asphalt comes into contact with the metal, which cools the asphalt at the ends," he says. "The mix will segregate as the particles roll to the truck's sides and ends during transport to the jobsite."

Live-bottom trucks offer more protection against material and thermal segregation during transport. There is less surface area for the asphalt to come in contact with, so less cooling takes place, and the bed is shaped like a "V" to reduce particle segregation. As an added bonus, "Live-bottom trucks offer faster unloading into the paver's hopper than end-dump trucks," adds Rieken.

No matter if it's warm mix or hot mix asphalt (HMA), paving contractors have equipment options to mitigate segregation occurrences at the site, and, in some regions, this additional equipment is a requirement to meet state specifications. "Some specifications are so strict for mainline paving, that they cannot be met with a traditional slat paver alone," comments Rieken.

Material transfer vehicles (MTVs) and devices (MTDs) are arguably the contractor's best allies in the battle against segregation. However, there are key design differences, so contractors must carefully review the equipment options to ensure they are getting the right machine for the job.

Early MTV designs offered large storage capacities and some reblending capabilities. "The intent of those first designs was to allow crews to pave continuously to eliminate truck-end segregation," explains Rieken.

While improving mat consistency, MTV size posed several challenges at the jobsite. High capacity material storage meant that mix temperature could drop by up to 10°F during the truck to MTV to paver exchange. A high center of gravity led to high material discharge points from the conveyor, which opens the door to reintroducing segregation when loading the paver's hopper. These heavy machines also resulted in empty wheel loads of 75 psi, which led to parking problems, made crossing bridges cumbersome and limited MTV usage.

A newer generation of MTVs builds on the continuous paving benefits of previous designs, offers improved reblending capabilities and lowers ground contact pressures. "Some states require a limit of 10°F temperature differential across the mat, which calls for more aggressive remixing of the asphalt," says Rieken.

Low psi MTVs usher in the ability to be used on base lifts for reducing material segregation. Fear of subbase rutting with high psi wheeled machines has led many state specifications to limit MTV usage to the top paving lifts. "This is counterintuitive and counterproductive," says Rieken. "Base mixes are made with larger stone sizes that are more prone to segregate, so we should be using MTVs on the base lifts. We have customers using the CR662RM RoadMix to pave base lifts, but it cannot be used as an MTV by spec."

Similar to MTVs, MTDs establish continuous paving and can be used in conjunction with either dump truck or windrow paving. Unlike MTVs, these machines attach to and are guided by the paver, eliminating the need for an additional operator. Some have shock-absorbing push rollers to eliminate truck "bumping" and screed settling. Several designs will also reblend material and have a low discharge height to eliminate drop segregation.

For contractors working with mixes prone to particle segregation such as Stone Matrix Asphalt (SMA) but don't want to use a transfer vehicle or device, Terex Remix Anti-Segregation System pavers offer an alternative. Replacing the traditional slat conveyor with two sets of two counter-rotating augers, these pavers offer the same aggressive reblending capabilities as the new generation MTVs with the added benefit of doing so at the last stage of paving. This combats material as well as thermal segregation.

Rieken cautions contractors not to think that bigger is better. "Insert size," he says, "must be matched to the paver hopper, or material will pool off to the sides, which will flow into the conveyor as the asphalt level drops. This results in random patch segregation."

At the screed, consistency is paramount in reducing longitudinal segregation. Operators must monitor that the ratio pots or flow gates are set to deliver enough, but not too much, material to the spread augers, so they run continuously. If the augers are allowed to spin too slowly, larger aggregate drops off at the outboard bearing support, which results in longitudinal segregation.

A major topic of concern today is centerline segregation, which results in top-down cracking. This occurs under the auger chain drive, and manufacturers counteract this problem by including variations of reversing augers to force material under the housing. Creating material confinement through lead crown adjustments and housing baffles mitigates this form of segregation.

Before adding equipment to the paving train and before searching out paver options, paving success ultimately comes down to training the operators. Crews must be thoroughly educated in correct paving techniques and how to properly use each piece of equipment that's on the jobsite.

Crews should know the capabilities and limitations of the paving equipment. No amount of equipment will end segregation unless it's operated in the correct manner.

Manufacturers work with contractors at the jobsite to help crews get the most out of their equipment. Additionally, contractors can attend equipment training schools.

Beyond equipment selection and following proper paving techniques, Rieken leaves the operators he trains with five keys to help prevent material and thermal segregation. "Keep material confined; avoid dropping it; prevent mix dribbling; pave in a smooth, uniform and uninterrupted fashion; and don't spill asphalt in front of the paver," he concludes.