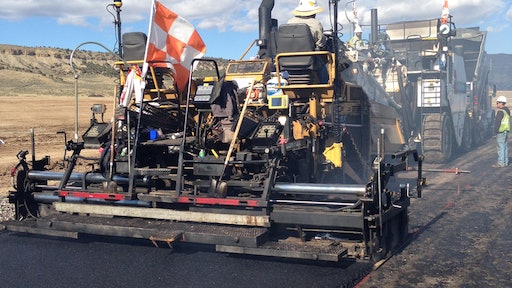 Tucked in the northwest corner of Colorado is Rio Blanco County, which according to the 2000 census is home to just fewer than 6,000 people. At 3,200 square miles, the county’s population density is approximately two residents for every square mile, which provides plenty of elbow room.

Located in Meeker, CO and serving the area for air transportation is Meeker Airport, a C-II general aviation airport. The FAA designation of C-II means the airport can accommodate aircraft with wingspan of less than 79 feet. The airport is critical to residents and businesses in Rio Blanco County. Private aircraft for energy companies including the mining niche, ranchers, fishing and hunting outfitters, as well as air charter service for both passengers and cargo are all flown in and out of Meeker Airport.

Runway 3-21 at the county-owned Meeker Airport had reached a point of wear and deterioration that required full reconstruction and upgrades to remain compliant with the FAA’s C-II requirements.

The project, which was awarded to Fiore & Sons Inc., Denver, CO, was a two-stage project with a contract value of $12.5 million. Construction consisted of the demolition of the existing 60-foot wide by 6,500-foot long runway and the construction of a new runway to meet C-II runway safety area and longitudinal standards. The new runway was widened to 100-feet — nearly doubling its width — and remained 6,500-feet long. The runway ties into the existing apron connector with a teacup style turnaround on the 21 end of the runway.

Construction of the new runway

“We were responsible for base course and paving of the new runway and the overall construction of the large apron and taxiway,” says Jeff Boone, project manager for United Companies. “We needed to complete our portions of the combined projects within the eight-month timeline for the whole project, so our timing was tight.”

United Companies had two major responsibilities in the project: the dirt and stone work to create the subbase and the finish paving on the runway, apron, and the aircraft turnaround.

Between the dirt and paving crews, United Companies had approximately 20 workers on the Meeker Airport site.

After Fiore & Sons completed the demo of the old runway and moved 1,000,000 cubic yards to rebuild the runway, United Companies came on site and moved 100,000 yards of dirt for the large apron and taxiway.  Between the two projects the company placed 70,000 tons or 35,000 cubic yards of p154 and p209 crushed aggregate base course and  in  6-inch lifts with the company’s three Caterpillar 140H motorgraders equipped with Topcon 3D-MC2 machine control.

“The Topcon system helped us achieve more accurate placement of the base materials at higher speeds and better tolerances,” says Jeff Gross, GPS machine control foreman for United Companies. “With a tight production deadline and stringent FAA requirements, it helped to have the technology.”

As part of the machine control system, the motor graders are equipped with the Topcon GX-60 Control Box that features Windows XP operating system, touch-screen interface, USB file transfer capability, and a six-inch sunlight viewable color LCD screen. Additionally, the system includes a GPS antenna, MC-R3 receiver, and the MC² sensor—an inertial sensor which combines gyroscopes and accelerometers to measure the X, Y & Z position as well as the roll, pitch, yaw and acceleration of the grader. The Topcon controlling software is designed to provide position updates up to 100 times per second.

GDA Engineers, Cody, WY provided the project control points as well as the points for drainage and utilities for the Meeker Airport project.

“A tremendous amount of time and money was saved because we didn’t need to be setting grade stakes,” says Ken Dobey, construction manager for United Companies. “United Companies created the 3D site model which our GPS machine control could use — thus, the job was virtually stakeless.”

Dobey points out that the company has been an early adopter of technology for the past 15 years, with GPS machine control in use for the past four years.

“Our business approach is to be at the cutting edge of technology,” Dobey stated. “We’ve found that our investments in technology save us time and resources.”

In keeping with it’s technology adoption approach, United Companies recently added Topcon Millimeter GPS Asphalt Paver Systems to its three Cat AP-1055D pavers. The Topcon system uses what Topcon refers to as LazerZone technology, which uses GPS positioning together with a zone laser reference provided by a PZL-1A rotating laser, which is says to transmit a signal that creates a measuring area 10 meters (33 feet) in height.

To pave the 100-feet by 6,500-feet long runway, United Companies arranged three PZL-1A rotating lasers spaced 500 feet apart and then leap-frogged them to maintain continuous production flow. A Roadtec SB-2500e material transport vehicle was used to ensure the hot mix asphalt was delivered consistently to the paver at the correct temperature and mix.

“We were quite pleased with the results from the Millimeter GPS system,” Gross says. “We completed our work faster than expected and the results were superior, Only 16 out of the 2,500 test shots were out of compliance and none required corrective action.”

The complete Meeker Airport job required six layers that each needed to be checked for smoothness. The first layer was a graded dirt layer followed by three six-inch lifts of the P-154 subbase course — which is a gravel that consists of hard durable particles or fragments of granular aggregates. The fifth layer was a six-inch lift of PT-209 base course. And the top layer is two,  two-inch lifts of FAA-specified HMA.

“If we had needed to complete all of this work the old way using survey crews and pounding wood, it probably would have taken us two to three times longer … the technology is that beneficial,” Boone says. “And we can’t argue about the quality of the finished results … the smoothness of the runway pavement can speak for itself.”

The final International Roughness Index of the recently completed Meeker Airport runway surface is well within the FAA specifications. Both the dirt and paving crews of United Companies are pleased with the work they’ve completed on the now upgraded Meeker Airport.