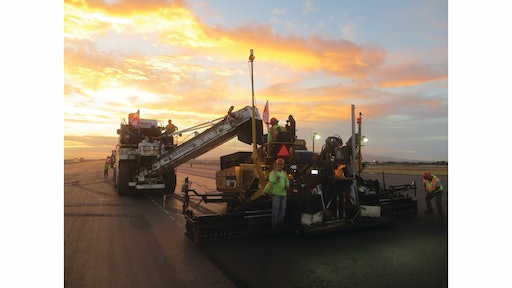 The team at Jas. W. Glover Ltd. worked in 24-hour shifts to keep portions of the runway open at all times and to ensure minimal flight disruptions.

Jas. W. Glover, Ltd. has approximately 200 employees and produces its own aggregate from two quarries. The company mines basaltic rock on the islands of Hawai’i, and Kaua'i.  Glover’s construction expertise includes mass grading and site work, building construction, and concrete and asphalt paving. Notable projects include: the National Cemetery of the Pacific at Punchbowl, the Halawa Water Tunnel, various improvements to the military bases on the island of Oahu, H-1 Freeway, Pali Highway, segments of the Hawai'i Belt Road, various bridges and improvements along the Hamakua Coast and runways and taxiways at the Hilo International Airport.

“We are very proud of our company, employees, and operations,” says Gregg Nathaniel, Glover’s construction superintendent. “We also work in a very competitive market. It is important for us to strive to be leaders in our industry. One part of the business we wanted to improve upon is our pavement material yields, especially for elevation control projects like airports. We found several contractors using Trimble 3D technology for their asphalt paving projects including the recently completed Formula 1 track in Austin, TX. Trimble was used for both 3D milling and 3D paving. Even with all the vertical elevations and slopes, it was a great success.

“We expected the technology to keep us on schedule, within contract amounts for material yield, and to help us meet extremely tight tolerances and specifications for smoothness and finished elevation. Trimble delivered,” says Nathaniel.

Acquiring Trimble 3D technology was an important investment for Jas. W. Glover, Ltd.  as they were awarded the re-construction of Runway 8R-26L , also known as the Reef Runway, scheduled for completion in the fall of 2013.

Located at the Honolulu International Airport on the island of O’ahu, the Reef Runway is a massive structure built on a reef using coral fill.  Constructed in the mid-70’s, the Reef Runway originally opened in 1977 and is the first major runway in the world to be built entirely offshore. At over 12,000 feet long and 200 feet wide, the Reef Runway is one of the largest runways in the US. It serves as a runway for Hickam Air Force Base and also served as an alternate landing strip for NASA’s Space Shuttle program. Since opening, the Reef Runway has had patch upgrades but had never been re-surfaced. This was the first major re-construction since it opened 36 years ago!

“Other than a failed attempt with another brand of technology, we still consider ourselves new in using 3D technology for our paving operations” says Nathaniel. “We decided it was best for us to acquire the equipment early and learn the technology prior to the Reef Runway project. Our initial investment was a Trimble PCS900 3D mill and 3D paving system installed on our Roadtec RX-900 mill and Cat AP1055D paver. We also acquired four Trimble SPS930 Universal Total Stations and two rovers. We trained and applied the 3D technology at the Hilo International Airport during the summer of 2013. This process was very important to us - and our crews -to prepare and learn prior to the Reef Runway project.”

With a tight schedule, Glover divided the Reef Runway variable depth milling and paving project into three phases. The FAA and the Hawai’i Department of Transportation (HDOT) required that each section of the runway take no longer than 15 days to complete, with stiff penalties written into the contract for missing deadlines. The team worked in 24 hour shifts to keep portions of the runway open at all times and to ensure minimal flight disruptions. The first phase was a 3,000 foot section on the east end of the runway. While work was being performed on this section, the 9,000 foot west end section was active. Next, the 3,000 foot west end section was milled and paved, and finally the center 6,000 foot section was reconstructed in a 24-hour runway shutdown.

To increase milling and paving production at the Reef Runway, Glover added Trimble PCS900 Paving Control Systems on an additional Roadtec RX-900 mill and Cat AP1055D paver. The system included four more SPS930 total stations and two rovers for topos, layout and checking grade. “We ran two 12.5’ wide 3D mills and two 25’ wide 3D pavers to keep up with production,” says Nathaniel. “Being able to control the milling elevation, and placing material to elevation with the pavers while maintaining slope and smoothness was key to our success. Plus we did it without stringline or wires. Each machine was controlled by a total station, and we used additional guns so we could leapfrog every 1,000 feet without having to stop the machine. Then we had a grade checker checking the elevation behind each machine with another total station and rover system.”

The company built the 3D models in Trimble Business Center software. The 3D design is then transferred to the machine and displayed to the operator to show areas that are on, above, or below ideal grade comparing the actual drum position and slope with the digital design. The system automatically guides the milling drum to cut the ideal depth and slope without stringlines or manual adjustments. Not only did the PCS900 on the milling machines provide a smoother base for paving, Nathaniel explains that smarter milling means they have to remove less waste material and mill off the minimum depth only. As a result, they can use less asphalt for the final surface. Using the Trimble PCS900 Paving Control System, the outside edges of the runway were milled at four inches and the inside center portion was milled at six to eight inches.

Nathaniel believes that the support from Trimble was a critical component to fostering quick adoption of the technology. “The support from Trimble has been outstanding,” says Nathaniel. “The Trimble team was out there working 24, 36 hours, right alongside us, helping us to learn the system and teaching new people how to use it. It has made all the difference to us. We are also very impressed with how we can re-use the same components for other applications - say on a grader or dozer.”

With the capabilities of the technology, Jas. W. Glover, Ltd. was able to finish each section on time, even completing the overall paving portion of the project two days early. Nathaniel explains the team completed the third phase of the runway, which was the biggest in terms of length and square yardage - 3,000 feet longer - in the same 15-day timeline as they did the first and second phases. This was especially significant because missing any one of these deadlines would result in a penalty of $240,000 per day in liquidated damages.

“With the Trimble system, we were able input everything into the model, set the mill down and just start cutting, and it cut everything to slope and grade,” says Nathaniel. “Because of the existing variable slopes of the runway, it would have been nearly impossible to mill everything to the new profile without using 3D technology. It saved us huge amounts of time and manpower in terms of layout, topos and establishing where the grades should be.”

Nathaniel was pleased with the smoothness of the runway surface. He explains there were zero grinds on the finished product and elevation was right within specification. Glover met the half-inch grade tolerance, quarter inch up or down for the entire length of the runway.

In terms of material yield, the total tonnage used to resurface the runway was 92,469 tons of asphalt, just under the 92,600 tons estimated. Nathaniel attributes this yield accuracy to the 3D paving system because it empowered his operators to cut exactly to grade, and the paving thickness was put back exactly to grade of the new profile the first time. Because they were able to closely track quantities of material being put down, Glover was able to control their inventory stock very closely.

“In previous projects we’ve had to rely on string lines and topos, and the risk of overrunning on material was always there,” says Nathaniel. “This is the first project that we’ve really nailed it to a tee on the yield.  We couldn’t have asked for anything more with no waste and no excess or overruns. This was a huge savings because any overages would of come out of our pocket.”

Nathaniel believes Trimble 3D milling and paving offers other significant benefits in addition to material savings. Greater productivity means less time is spent on prep work on layouts, topos, string lines, and survey. Because everything was built into a design, the machines were able to work nonstop and realize significant fuel savings over the course of the project. In addition, a four-man survey crew was able to manage the project and control everything through the design using the Trimble total stations. The surveyors checked grade and the finished as-builts but Nathaniel estimates they would have needed two or three times more surveyors if they had used a traditional resurfacing techniques.

“This has really been a monumental project for us,” says Nathaniel. “Reconstruction of the Reef Runway was a once in a generation opportunity for our company. With 3D mill and 3D paving controls from Trimble, we were able to lay 5,000 tons of asphalt to grade and slope per night, in a 12-hour shift compared to 2,000 or 2,500 tons per shift, on other jobs. We are very pleased and proud of everyone that contributed to our success and we look forward to opportunities to utilize this technology on future projects.  We are happy to count Trimble as part of the Jas. W. Glover, Ltd. ohana.”