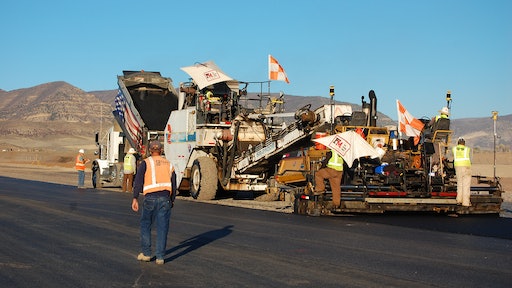 Demolition of a 60-foot by 6,500-foot runway and construction of a new 100-foot-wide runway that meets FAA safety and longitudinal standards — all within an eight month timeframe

Meeker Airport in Meeker, Colo., is a C-II general aviation airport that can accommodate aircraft with wingspans of less than 79 feet. Runway 3-21 at the county-owned airport had reached a point of wear and deterioration that required full reconstruction and upgrades to remain compliant with the FAA’s C-II requirements. The two-stage construction project, valued at 12.5 million, includes demolition of the existing 60-foot wide by 6,500-foot long runway and the construction of a new runway to meet C-II runway safety area and longitudinal standards. The new runway was widened to 100 feet — nearly doubling its width — and remained 6,500 feet long. The runway ties into the existing apron connector with a teacup style turnaround on the 21 end of the runway.

Contractor Fiore & Sons, Inc., Denver, Colo., completed the demotion and removed 43,000 square yards of roto-milled asphalt in preparation for the site conditioning, grading and paving completed by United Companies of Mesa County, headquartered in Grand Junction, Colo. Between the dirt and paving crews, the company had approximately 20 workers on the Meeker Airport site.

“We were responsible for base course and paving of the new runway and the overall construction of the large apron and taxiway,” stated Jeff Boone, project manager for United Companies. “We needed to complete our portions of the combined projects within the eight-month timeline for the whole project, so our timing was tight.”

United Companies had two major responsibilities in the project: the dirt and stonework to create the subbase and the finish paving on the runway, apron and the aircraft turnaround. In addition to the main runway, United Companies paved a 650-foot by 320-foot apron and a 1,200-foot-long by 50-foot-wide taxiway.

After Fiore & Sons completed the demo of the old runway, United Companies came on site and moved 100,000 cubic yards of dirt for the large apron and widened runway. Between the two areas, the company placed 70,000 tons, or 35,000 cubic yards, of p154 and p209 crushed aggregate base course in 6-inch lifts with the company’s three Caterpillar 140H motorgraders equipped with Topcon machine control.

For the paving, the United Companies placed 23,000 tons of FAA-spec HMA in two lifts of 2-inches deep. To meet stringent FAA requirements, the finished paving, after leveling by a 16-foot straight edge, must be within 3/16 of an inch. There was no room for variance.

“We’ve paved a lot of airports and our crew understands the quality standard we must reach,” said Rick Bottenfield, paving manager for United Companies. “The finished paving is the final and most noticed step in achieving the FAA tolerances.”

Bottenfield assigned the highway/airport paving crew that uses a Roadtec SB-2500 Shuttle Buggy to the Meeker Airport project, “because I wanted the advantage of continuous paving the Shuttle Buggy provides.”

The Shuttle Buggy can store up to 15 tons of asphalt mix, allowing haul vehicles to unload as soon as they arrive. The large storage capacity is said to not only help reduce truck cycles and hauling costs but provide an uninterrupted, continual flow of material to the paver.

With the Meeker Airport project, United Companies believed that the Shuttle Buggy was instrumental in preventing asphalt mix segregation at so many points during the paving process.

“Even though our production plant happened to be located very close to the site, we understand that a lot can happen to the FAA-spec HMA even during a short transport,” Bottenfield said. “The Shuttle Buggy gave us the distinct advantage of continuous paving by ensuring the material is thoroughly mixed and at the right temp. We’re not waiting for the plant or delivery trucks since the shuttle buggy has ample storage capacity to ensure the continual flow of asphalt to the paver.”

Bottenfield credited the Shuttle Buggy with helping to “ensure we had almost no rework on this project — we had just a few spots requiring grinding.”

“Because we have the Shuttle Buggy, we have a competitive advantage since we’re seeing Federal Highway Administration specs coming through specifically requiring that a Shuttle Buggy be used, because they know the machine offers quality and consistency advantages,” stated Bottenfield.

The final International Roughness Index of the recently completed Meeker Airport runway surface was well within the FAA specifications. Both the dirt and paving crews of United Companies were pleased with the work they’ve completed on the now upgraded Meeker Airport.

As Boone said. “We can’t argue about the quality of the finished results…the smoothness of the runway pavement can speak for itself.”