Is It Too Cold to Pave?

Feeling the crunch to get the work done before Winter hits? Keep these things in mind before you lay asphalt during the colder months 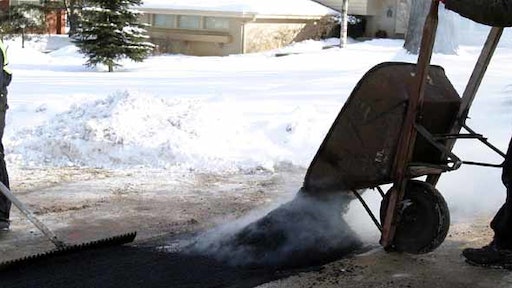 “Can asphalt pavement be put down during colder weather?” It is a simple question, but the answer is complicated. Asphalt contractors have to evaluate more than just the temperature registering on the thermometer hanging outside the office to decide whether it is too cold to pave.

During colder temperatures, mix temperature is critical to achieving compaction. You will have less time to compact the mix in cold weather, as the mix will cool more quickly. Contractors need to understand the factors that affect the cooling rate of the mix. Before paving, decide what variables you are willing and able to control, such as project size and requested mix delivery temperature.

Keep these five things in mind before paving in cooler weather.

The time available for compaction (TAC) defines the total amount of time that rollers operators have to compact the mix before it loses too much heat and becomes too stiff to compact.

How thick is the pavement to be? The thinner the layer of asphalt, the faster heat will dissipate. This means that in cold weather, crews have a very small window for working a thin layer.

Thicker lifts hold temperature much longer than thinner lifts. The heat retained in asphalt lifts is not a linear relationship, but rather an exponential one. For example, 3-in. lift will retain heat for approximately four times as long as a 1.5-in. lift of the same mix placed under the same conditions.

How far is the asphalt plant from the jobsite? Asphalt is hot when it leaves the plant, and if it cools in transit, it can be unusable upon arrival. Crusts on top of the asphalt or segregation of components would result in pavement of inferior quality with a reduced life expectancy. There are transport methods that can help protect asphalt during transfer, but over long distances, these methods may be insufficient.

This has a relatively minor influence on the cooling rate of HMA. However, if the ambient air temperature is combined with wind, a condition of both conductive and convective heat transfer occurs. Heat is now being lost to the base through conduction and to the air through convection. The greater the wind speed, the more quickly it will remove heat from the HMA.

This refers to the effect of the sun on HMA temperatures. The net heat loss from the pavement that is the difference between the heat absorbed by the pavement from the sun’s rays and the heat that radiates off the mat into the air.

Simply stated, this means that sunshine will help reduce the rate of cooling of the placed HMA. When placing HMA, ensure that the mix temperature is a minimum of 290° F at the mid-depth of the mat behind the screed when the compaction process begins.

The company has created a future-based culture that creates positive solutions for customers.
Jun 2nd, 2021
Latest

The special edition 8520B Asphalt Paver is custom-designed to honor the legacy of workers who have deep roots in the asphalt industry
VT LeeBoy
Feb 16th, 2021

The deal, expected to be finalized in Q4 2020, will allow Gencor to manufacture, develop and market the North American paver product line under the Blaw-Knox brand.
Volvo Construction Equipment
Jul 31st, 2020

The company has created a future-based culture that creates positive solutions for customers.
Jun 2nd, 2021

By identifying where segregation can occur, asphalt producers and paving professionals can work to prevent this problem
Jessica Lombardo
May 4th, 2020

Watch our top five forces acting on your asphalt paving screed and how you can improve them.
Apr 2nd, 2020

The new control stations are immediately available on the RP-250e Asphalt Paver and will be rolled out to all Roadtec, Inc. pavers in the future
Mar 12th, 2020

This wheeled paver has a standard paving width of 31-in. to 51-in. and is ideal for patchwork, trench paving, bicycle paths and golf cart paths.
Dynapac North America LLC
Mar 9th, 2020

WITOS Paving Plus assists in achieving accurate and consistent results, from the plant to the paver, in real time
Wirtgen America
Feb 13th, 2020