Improve Energy Efficiency Through Best Practices at Your Asphalt Plant 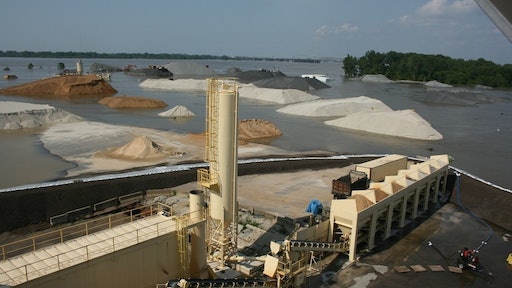 Energy costs are driving most asphalt plant operations today. Many producers are looking to reduce costs in any way they can and one of the best ways to cope with volatile energy costs is to reduce consumption at the plant.

Energy costs are driving most asphalt plant operations today. Many producers are looking to reduce costs in any way they can and one of the best ways to cope with volatile energy costs is to reduce consumption at the plant.

At World of Asphalt in Houston, we learned some easy ways to reduce energy consumption that do not require an enormous amount of effort on the part of the plant owners.

The biggest consumer of energy is the burner and dryer at the asphalt plant which is why your stock piles play a huge role in saving your company money.

“A 1% decrease in moisture in your stock pile decreases your costs by 12% because your dryer doesn’t have to work as hard,” Bill Garrett director of training at Meeker Equipment says.

Covering your aggregates with a fabric structure is the best way to help prevent moisture from even getting to your aggregates. If that is not an option, sloping the stock piles properly at an ideal 4% slope will also help. Be sure to have the water drain towards the north.

“The sun is a big radiant heater. Your loader operator should always look to pick off of the south side of your piles because that’s where the sun hits first,” Garrett says. “You could reduce your moisture by a half or a full percentage which will save 6-12% in fuel costs just by how you arrange your stock piles.”

By the Numbers: As an example, the average plant is making about 150,000 tons of mix a year and spending around $300,000 to dry those aggregates for mix production. Garret says that if the plant could reduce those drying costs by 6% that’s a savings of $18,000 right there.

“This also means you need to make sure your dryer is properly sealed,” Garrett says. “You don’t want excess air to come in that the burner has to heat up. That reduces your combustion efficiency and wastes fuel.”

The operation and maintenance of your exhaust gas system impacts day-to-day operation and production. If it’s not running properly, those problems lead to dollars lost.

“If we don’t watch it, our flighting will cost us big money,” Garret says. “On a counter-flow dryer, if I go look at the duct work that is headed to the baghouse from the discharge, nine times out of ten, one side will have the paint burned off and the other side won’t. Where the paint is burned off, there has to be a hole down through the dryer in the flighting that hot gasses can get through and burn that paint off. This means all that hot gas didn’t go in to the rock as intended but it went to the baghouse and burnt the paint.”

“You have to properly flight your dryer so that you don’t let energy leave the dryer without going in to the stone,” Garrett says. “I would say that any time you have to increase the temperature of something, go and find out why. Increasing the heat won’t fix the underlying problem.”

Proper insulation can make or break your plant efficiency. If you want to reduce fuel usages, examining and repairing insulation on all heated areas is important.

“Your tank farm is a good place to start because it’s a 24/7 heating system,” Garrett says. “Any older tank will have little to no insulation left so inspect and reinsulate older tanks.”

By the Numbers: A 30,000-gal. horizontal tank that has no insulation will require 1.4 million BTU’s to maintain temperature. If you add just 3-in. of insulation to that tank, it will only require 47,000 BTUs to keep temperatures consistent.

Many mix facilities do not insulate their piping because it’s difficult to do, but proper pipe insulation can save you big money in terms of energy efficiency.

“When you think of all the piping at the plant, that becomes a huge load on your hot oil heater that’s working all the time to keep those pipes hot,” Garrett says. “People don’t insulate because it’s hard, but you don’t have to insulate all the elbows and jumpers to make an impact. Just insulate the lineal feet and you’ll see a big difference. That’s where you’re going to save your money anyway.”

Insulation blankets can be utilized to cover those areas that may be difficult to insulate. The blankets can easily be removed and reattached when service is needed.

“I am also a strong believer in insulating drums,” Garrett adds. “If you put an infrared camera on the dryer, you will see temperatures in excess 600°F or more on the dryer. When you insulate it and take the picture, you will see it under 200°F. Where did the 400°F of energy go? It went to the stone and instead of radiating out through the drum shell.”

And since that heat didn’t have to go through the dryer, you’re also able to reduce energy since there is not excess heat on the motors, reducers, bearings and wiring that’s all around the drum. By protecting those elements from high temperatures, they will ultimately end up lasting longer.

While it may not have anything to do with your plant components, making sure you have a proper schedule in place with the field is paramount to reducing costs at the plant.

“I asked eight major mix producers, guys that were producing over 700,000 tons a year, what the number one thing was that they could do to save energy at the plant and not spend so much money. Seven out of eight said that one thing would be having proper scheduling with the field,” Garrett says.

This means knowing what mixes you are producing ahead of time so that you’re not producing a mix on a day where it’s not needed. This will also prevent you from getting behind on mix production that can cost productivity issues in the field.

“Plant operators communicate, but if you’re feeding several crews and one doesn’t know what they need, that can cause the plant to possibly create a mix that’s wrong, unnecessarily wasting both time and money,” Garrett says.

This is where the importance of plant controls can really help with keep production costs down.

“With plant controls, owners can pull up how plant 1, 5 and 8 are producing from his office and make more timely decisions on the operations and mix production which will help with cost control,” Garrett concludes.

Making sure your plant is clean is also a huge component of having it operate efficiently.

“If material, oil, dust, etc, build up on the burner components, it reduces its efficiency to process the fuel to a vapor,” Garrett says. “That means your burning more fuel to do the same job.”

Garrett says that if you are using a recycled fuel of any sort, processing and filtering that material is essential.

“The fuel needs to be clean when it gets to the burner,” Garrett adds.

“If you get a buildup on your coils in your tanks, that buildup is carbon and it cannot dissipate heat from the thermal fluid into the asphalt so the heater has to run longer to get you the same temperatures,” Garret says. “I recommend annually checking the coils and the inside of the tank to make sure they’re clean so you’re not using energy unnecessarily.”

Infrared is Your Friend

It’s extremely easy to install and move an infrared camera around to different locations at your plant. Most phones can even accommodate infrared and the camera will show you where heat is escaping from places like the baghouse roof, dryer and more.

“I encourage plant owners to take infrared pictures of everything; their bearings, electric, all the starting equipment, motors, etc,” Garrett says. “That way you can build a library of what your temperatures are when you’re normally running and periodically check them to see if you’re about to have a failure. If something is hotter than it normally is, there is friction, something is happening that is costing you more money than necessary to operate and could hurt your plant.”

Other Ways to Save