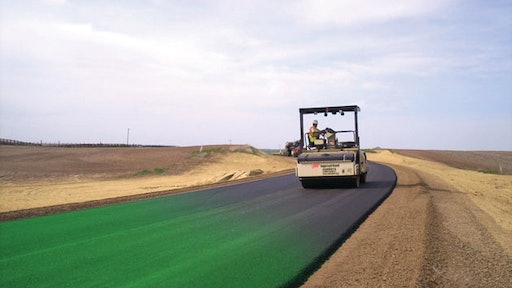 Thanks to broad adoption of sustainable construction practices, the asphalt pavement industry saved taxpayers more than $2.2 billion dollars during the 2011 paving season through the use of recycled materials and energy-saving warm-mix technologies.

According to a survey conducted by the National Asphalt Pavement Association (NAPA) in partnership with the Federal Highway Administration (FHWA), about 66.7 million tons of reclaimed asphalt pavement (RAP) and 1.2 million tons of reclaimed asphalt shingles (RAS) were collected in the United States during 2011 for use in new pavements. Also, about 19 percent of all asphalt produced in the country that year was made using warm-mix asphalt (WMA) technologies.

“Asphalt pavements are the sustainable option for paving our nations’ roads and highways. With warm mix, we can use less energy to produce high-quality pavements, and RAP and RAS allow us reuse liquid asphalt, saving costs and preserving natural resources,” said John Keating, NAPA 2013 Chairman and President and COO East of Oldcastle Materials Inc. “While use of these technologies has increased dramatically, there is room to do more, and the asphalt pavement industry is ready to reach even higher levels of sustainability in road construction.”

The use of RAP and RAS during the 2011 paving season translates to a saving of 21.2 million barrels of liquid asphalt binder, saving taxpayers some $2.2 billion. When reclaimed asphalt pavement and shingles are reprocessed into new pavement mixtures, the liquid asphalt binder in the recycled material is reactivated, reducing the need for virgin asphalt binder. Using reclaimed materials also reduces demands on aggregate resources. Warm-mix asphalt technologies allow asphalt pavements to be produced at lower temperatures, which means reduced energy demands, as well as fewer emissions during production and paving.

“The asphalt pavement industry has a long history of adapting new technologies and innovations to make a better product,” said NAPA President Mike Acott. “This survey reflects that and demonstrates how asphalt producers are at the forefront of ensuring that our roads are built in an economical and sustainable manner.”

Compared to a previous survey of the 2009 and 2010 construction seasons, the use of these sustainable practices has continued to increase.

RAS usage also continued to climb, increasing to 1.2 million tons in 2011 — an 8 percent increase over 2010, and a 52.5 percent increase since 2009. Since 2009, RAS usage has been reported in 36 states. RAS includes both manufacturers’ scrap shingles and post-consumer roofing shingles.

In 2010, FHWA made warm-mix asphalt part of its Every Day Counts initiative to speed the deployment of technologies that can improve highway projects’ quality, sustainability, and safety. In 2011, total WMA tonnage in the U.S. was estimated at about 69 million tons, a 67 percent increase from 2010 and a nearly 309 percent increase since 2009. Almost all WMA in the U.S. was produced using a foaming process, which injects a small amount of water into the mix; warm-mix additive technologies accounted for a little more than 4 percent of the market.

“Warm mix brings with it so many benefits — reduced energy usage, better compaction in a wider range of temperatures, and more pleasant working conditions. It is fantastic to see how quickly it’s been adopted in such a short period of time,” Acott said. WMA was first demonstrated in the United States in 2004.

The survey was conducted in mid-2012. Results from 203 companies with 1,091 plants in 49 states and Puerto Rico, along with data from 32 State Asphalt Pavement Associations, were used to calculate industry estimates for total tonnage. A slight variation from the previously reported 2010 results is due to changes in survey design to ensure greater accuracy. A copy of the full survey, including a state-by-state breakdown of the data, is available at www.asphaltpavement.org/recycling

About The National Asphalt Pavement Association

The National Asphalt Pavement Association (NAPA) is the only trade association that exclusively represents the interests of the asphalt producer/contractor on the national level with Congress, government agencies, and other national trade and business organizations. NAPA supports an active research program designed to improve the quality of asphalt pavements and paving techniques used in the construction of roads, streets, highways, parking lots, airports, and environmental and recreational facilities. The association provides technical, educational, and marketing materials and information to its members; supplies product information to users and specifiers of paving materials; and conducts training courses. The association, which counts more than 1,100 companies as members, was founded in 1955.

Share Your Sustainability Message on Earth Day and Every Day