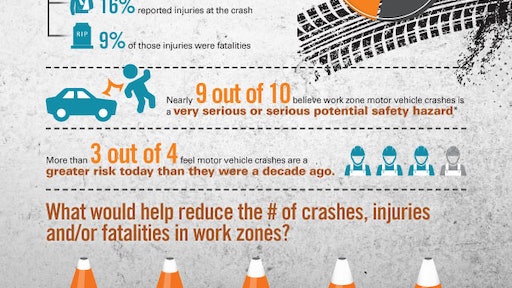 The Associated General Contractors of America (AGC) is calling for tougher standards when it comes to road construction zone safety.

Forty-six percent of highway contractors reported that motor vehicles had crashed into their construction work zones during the past year, according to the results of a new highway work zone study conducted by AGC.

Association officials urged summer travel motorists to stay alert while driving through work zones, noting that drivers and passengers are more likely than highway workers to be hurt or killed in work zone accidents.

"If the thought of saving someone else’s life isn’t enough to get you to slow down, just remember that you and your passengers are more likely to suffer in a highway work zone crash than anyone else,” says Tom Foss, president of Brea, CA-based Griffith Company and the chairman of the association’s Highway and Transportation Division. "In most work zones, there just isn’t enough margin for error for anyone to speed through or lose focus.”

Work zone crashes also have a pronounced impact on construction schedules and costs, Foss says.  He noted that 26% of contractors reported that work zone crashes during the past year have forced them to temporarily shut down construction activity.  Those delays were often lengthy, as 48% of those project shutdowns lasted two or more days.

Association officials says that 69% of contractors nationwide feel that tougher laws, fines and legal penalties for moving violations in work zones would reduce injuries and fatalities.  In addition, 80% of contractors says that an increased use of concrete barriers will help reduce injuries and fatalities.  And 70% of contractors nationwide agree that more frequent safety training for workers could help.  They added that many firms and the association have crafted these types of highway safety programs. But Foss suggested that the best way to improve safety was for motorists to be more careful while driving through highway work zones.

"With the summer travel seasons starting this weekend, our message to every motorist is this: when you see construction signs and orange barrels, take your foot off the gas, put the phone down and keep your eyes on the road,” Foss says.