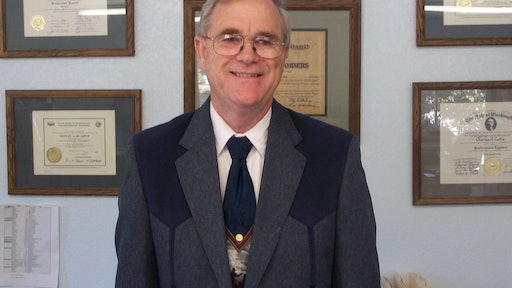 Hollywood got it wrong.

We’re all conditioned to recognize from the movies that good guys wear white hats while the bad guys wear black – but Alan Curtis, who died last week at the age of 66, was a good guy who could be picked out in any National Pavement Expo crowd because of his trademark black cowboy hat. I’ve missed seeing Alan and that hat since he was unable to attend NPE after the 2008 show, and I’ll miss Alan, who died Dec. 11, from now on. As Pavement Advisory Board member Michael Nawa put it when he learned of Alan’s passing, “Somehow our industry feels smaller today.”

But the paving and pavement maintenance industry – and Pavement Maintenance & Reconstruction magazine and National Pavement Expo – wouldn’t be big enough to feel small (and certainly wouldn’t be as good as they are) without the support and assistance Alan Curtis provided from 1991 when he was the keynote speaker at Pavement’s first West Coast event in Long Beach through his last “Pavement Defects & Solutions” seminar at NPE in 2008 in Nashville.

Alan started his career with CALTRANS in 1970, leaving after six years to work for Testing Engineers, Inc. where he managed asphalt cement activities including rehabilitation design, mix designs, and failure analysis. In 1983 he started CHEC Consultants Inc., a civil engineering firm that specialized in airport, highway and roadway pavement designs with an emphasis on rehabilitation, and not long after that was the first in the industry to produce a guide to pavement defects, depicting in four-color glory what a defect looked like, its possible causes and possible solutions.

That made Alan just about the perfect star to hitch my wagon to as I began learning this industry, and at the time I had no idea how lucky I was. But I do now because Alan Curtis was a believer. He believed in the industry, he believed in contractors, he believed in doing the job right, he believed in teaching people to do the job right and he energized his beliefs with his actions. While he was certainly not the only person in the industry to help me out (there are dozens upon dozens) he was the first, so he and I had a very long tenure. He more than anyone had As for all my Qs and he was never unwilling to help.

From the very early days after Pavement Maintenance & Reconstruction was purchased by The Aberdeen Group, Alan was an unpaid and much-pestered consultant and fact checker, the go-to reference to make sure ideas and articles were on track and that explanations were on target. From his inaugural 1991 keynote address – not surprisingly titled “Bringing Quality to Pavement Maintenance” – to his last session, Alan was a force at NPE and Pavement magazine’s West Coast events where he brought a vitality to his presentations and his conversations with contractors in hallways and over coffee, lunch or dinner. Because he believed in doing work the right way he was willing – eager – to spend time with contractors helping them solve their problems and guide their pavement maintenance efforts. And he had not only the ability but the willingness to be able to explain often complex engineering and technical concepts and principles in terms just about anyone can understand. So in 1992 he was included in the first group of industry representatives named to the Pavement Advisory Board – a position he not only accepted but one he seemed to relish.

So if you had the opportunity to learn from one of Alan’s seminars, or if you were lucky enough to share some informal time with him, you already know and probably carry with you some of his joy and enthusiasm – he was a great guy to be around. If you didn’t have that opportunity, fear not: There are plenty of people out there – not least of all his son, James, and daughter, Aleah -- who will carry on his legacy in the quality work they do and the high standards they set.

So I’ll miss Alan Curtis and his black Stetson (often paired with his bright purple shirt and bolo tie), but he made his mark on this industry and many of its people and his impact can be seen in every accurate pavement assessment, every correctly applied solution, every quality job completed by a contractor – and in the hundreds of people willing to share what they know to others who need a little help.

Yes, Hollywood got it wrong – at least in the case of Alan Curtis. His black hat was a symbol of enthusiasm, joy and integrity as a person and as a professional and there wasn’t a much better feeling than seeing that Stetson coming toward you through an NPE crowd.

Two paving-related deaths in recent news underscore the need for workers to closely monitor their jobsite surroundings. Here are five quick tips that can be used as a refresher for your crew.
Jessica Lombardo
April 12, 2017

Check Out the NPE 2016 Photo Gallery

Were you at National Pavement Expo 2016 in Charlotte, NC? Check out the web gallery to view all the photos from the event.
February 22, 2016
Pavement Roundabout

Retail Vacancies Down, Rents Up … Why More and Better Work is on the Way

The new line of JLG Rough Terrain Scissors has an answer for every task. When we say upgrade, we mean business – yours.
June 3, 2021
Pavement Roundabout

Can Construction Rebuild the Middle Class?

Newsletter Explains the Value of Data

OSHA Cracking Down on Temporary Workers

How to Raise Your Prices

No Excuses! Why Every Contractor Should Attend NPE

Learn history, importance and future of parking lots in ReThinking a Lot: The Design and Culture of Parking
December 3, 2012
Pavement Roundabout

Do You Conduct Background Checks? Should You?

Look to Commercial Properties in 2013

Where's Your Next Job Coming From? How about New Residential Construction?

Are Yellow Pages Ads Worth Your Dollars?

What Target Doesn't Understand about Sweeping

Do You Pay Your Workers Properly?

How ADA Updates Can Make You Indispensable to Your Customer

National Pavement Expo 2012 shows signs of growth for the industry
February 23, 2012
Follow Us