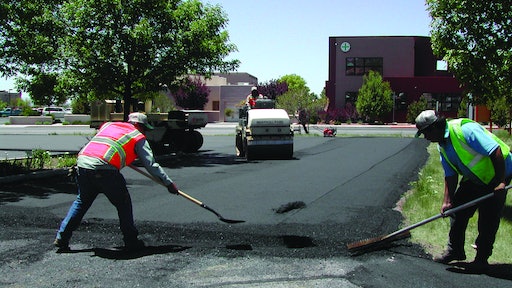 Don Rooney, owner of Pioneer Paving & Grading, was introduced to the idea of warm mix asphalt (WMA) at National Pavement Expo in 2009. The idea of a cooler paving mix that could be hauled farther, was still workable when delivered to the jobsite, and was easier on the crew and equipment intrigued him, so he tucked it in the back of his mind to look into further.

This spring he attended a WMA introduction presented by his local hot mix supplier, LaFarge Asphalt, and began to watch for a job where he could try the new environmentally friendly product. Before long the Albuquerque, N.M., contractor bid a large project for Christus St. Vincent Regional Medical Center in Santa Fe that included pulverizing and paving two roads on the hospital grounds, constructing a new parking lot and repair and overlay of nine others. One caught Rooney's eye.

"As you enter the hospital grounds on the left side is the medical dental parking lot, and I thought it would be a great place to try out the warm mix asphalt. So I approached Larry Dennis, the head engineer, and asked him, 'What would you think if the hospital parking lot went green?' He liked the idea right away but was concerned about the cost," Rooney says, adding that warm mix asphalt can cost up to $2 per ton more than traditional hot mix.

He contacted Ken Kugler at LaFarge and the supplier agreed to work with Pioneer Paving on price for that one parking lot. "They wanted to get warm mix asphalt out in the market and get it down so more people know about it and could come and take a look at it," Rooney says.

Warm mix asphalt is not only one of the newest U.S. paving technologies (it's been in use in Europe for years), it's the paving industry's main effort to "go green." Kugler says it's considered a "green" product because it takes less energy to produce and because it results in less fumes than traditional hot mix.

"We use a water-injection system that foams the oil and then coats the aggregate so it has a ball-bearing effect making it easier to move around," Kugler says.

LaFarge has been producing warm mix since March and didn't have to add any capacity to its Gencor Industries 500 ton-per-hour plant to do it. He says the 70-person plant, which supplies concrete, asphalt, and aggregate within a two-hour radius of Albuquerque, has been producing 1,500 tons of WMA a day. Kugler says LaFarge has supplied warm mix for more than 25 jobs including a parking lot four hours away − a job the plant couldn't have supplied with traditional hot mix.

"Travel time can be increased with warm mix because it cools slower than regular hot mix would so you can travel farther. We wouldn't have wanted to send normal mix that far," he says, adding that three hours is about the most they will send normal hot mix. "The warm mix will open a number of markets for us."

Proponents say that in addition to increasing haul times and distances, WMA offers a number of advantages, including:

But all those were only of marginal interest to Rooney, a member of the Pavement Advisory Board, who simply wanted to see how the mix performed.

The hospital required the work be done on a Friday. On the first Friday it rained and the second Friday the temperature was 57°F. Rooney rescheduled the job again because he was concerned about cold joints.

"We did treat it a little differently and delayed a day paving only because it was new to us," Rooney says. "Because of the flowability and the way you get density you can actually pave in cooler weather and extend your season. So on that 57°F Friday we could have paved it but we hadn't paved with this material yet so I just decided to wait until we had perfect weather."

He says, "the third Friday was a charm" with temperatures in the 70s. So while the parking lot was being power swept and blown clean he called the plant 60 miles away and ordered 364 tons of warm mix asphalt for construction of the 2-in. overlay.

The 3,276-sq.-yd. medical/dental parking lot required 700 sq. ft. of patching and sealing of more than 1,900 lineal feet of cracks ? all of which was done well in advance of the paving. As soon as the lot was swept clean Pioneer's crew applied a tack coat, just as it would prior to any traditional overlay.

"With the screed heated, we backed in the first truck and unloaded," Rooney says. "After the first pull I asked the crew if they noticed a difference. 'Oh yeah,' they said. They noticed right away that it was easier to shovel and much easier to rake. It didn't take them long at all." He says the warm mix asphalt was at 275°F at the plant, 250°F coming out of the truck at the jobsite, and the crew put it down between 220°F and 230°F.

"We put an infrared thermometer on it off and on and the coolest we found was 190°F to 195°F when I shot the mix on the ground and that still rolled pretty good," Rooney says. "If you're using traditional hot mix asphalt you don't want to get below 220°F or so to roll to get the density you need."

"Flowability through the paver seemed to be easier and the mix coming through the screed laid a nice mat," he says.

That ease extended to the crew. "The crew didn't have to work quite as hard as with a normal mix. It's just an easier material to move than hot mix asphalt," he says. "But it's still asphalt. You have to shovel and rake it but the shoveling flowed better, you didn't have to push as hard into the pile, and it was easier to pull and rake it back over for the joint.

"On the whole the workability and flowability of the warm mix asphalt makes it a little easier to work with, and it produces a nice finished product," Rooney says.

Rooney says WMA's lower mix viscosity reduces compaction challenges that a cooler mix presents. "You have more time to get proper density because the temperature isn't as high at the beginning so it doesn't drop off as quickly." Rollers were watered just as with a traditional hot mix asphalt, then a vibratory roller was used for one pass in the breakdown phase.

"Then when it cools enough so you can almost put your hand on it we hit it with the pneumatic roller, then finished with the steel roller with no vibration. The crew could roll faster than usual and rolling wasn't as much of a chore," he says. "And roller marks seemed to roll right out easier. If the pneumatic didn't take them out the static steel would."

He said that on the third pull the crew had to wait before hitting it with the roller but had no trouble compacting the mat. "It was about 195°F when we finally got the roller on it, and it rolled in well and the joints just disappeared. Then we back-rolled to a smooth finish."

He says plate compactors also were used on the job and didn't operate much differently than on a regular mix. "You could wait a little longer to get on it and it still smoothed right out," he says. "That's the only thing we noticed so I think it ought to work out well for plates."