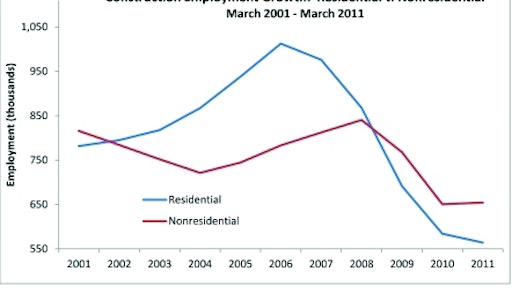 Difference between residential (blue) and nonresidential (red) employment based on Bureau of Labor Statistics numbers since 2001.

Despite the loss of 1,000 jobs in March, the nation's construction industry unemployment rate edged down to 20% for the month, according to the April 1 employment report by the Labor Department. Year-over-year, construction employment is down by 36,000 jobs, or 0.6%. Today's rate is lower from 21.8% in February and 24.9% posted in March 2010.

In contrast, heavy and civil engineering construction gained 2,400 jobs for the month and has added 25,100 jobs, or 3.1%, over the past twelve months. The residential building construction sector added 600 jobs in March, but has lost 18,600 jobs, or 3.2%, compared to the same time last year.

"The employment estimates for March indicate that the nation's economic recovery continues to gain steam," said Associated Builders and Contractors Chief Economist Anirban Basu. "While high and rising gas prices are likely to slow the pace of momentum as we approach the summer months, 2011 is poised to be a solid year of progress for America's economy.

"Unfortunately, the recovery in nonresidential construction has scarcely begun. Specialty trade contractors continue to hemorrhage jobs in large numbers, indicating that the capacity to supply construction services continues to exceed demand," said Basu. "This had been predicted, at least to a certain extent. With publicly financed construction no longer expanding and with many privately financed activities not yet in recovery mode, the overall level of demand continues to be stagnant.

"However, there are leading indicators, including ABC's own Construction Backlog Indicator, that suggest that the recovery of privately financed construction will begin sometime later this year," Basu said. "Evidence the fact that heavy and civil engineering construction added 2,400 jobs in March, perhaps a reflection of improvement to come as projects now in various stages of planning begin to break ground in larger numbers later this year and in 2012."