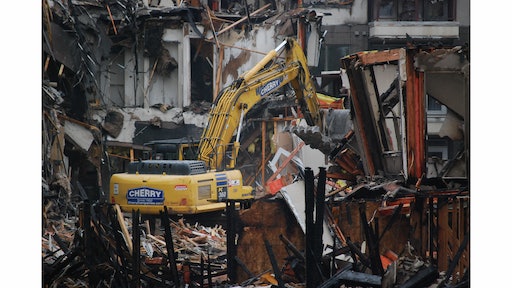 Throughout the country, fire departments enlist demolition contractors like the Cherry Companies to assist with fire abatement, the demolition of unsafe structures and help protecting the safety of firefighters.

Following a massive, five-alarm fire that destroyed a $50 million luxury apartment building in Houston, the Houston Fire Department called in a local demolition contractor for critical support. “The Cherry Companies’ work at the site of the immense apartment fire in Houston helps illustrate what happens every day in cities around the country as demolition contractors are called upon to provide the equipment, trained personnel and knowledge to assist in a variety of fire situations,” said Cheryl Caulfield, IOM, CAE.

Just 24 hours after the start of Houston’s first five-alarm fire in over a decade, locally based Cherry Companies was contracted to bring the remaining structures of the multi-story Axis Apartments to the ground. Still standing were a large portion of the apartment units and four- and five-story cement block stair towers following the enormous conflagration.

The Houston Fire Department was still extinguishing remaining hot pockets at the apartment fire as equipment from Cherry arrived on the complex site by noon the day after the fire. Cherry’s excavators quickly began bringing the structure to a safe condition. Because of the nature of the fire damage to the structures, it posed challenges in the approach the company took to the demolition.

“Because of the unstable condition of the remaining structures, it was important to have the equipment and experienced personnel to make the area safe,” said Mike Dokell, Cherry’s vice president of commercial demolition and project manager on the site.

Cherry continued work until 9:00 p.m. that night, when the structure was deemed safe by coordinated efforts of Houston’s Police Department, Houston Arson and OSHA. This enabled the city to re-open the streets to traffic. The company continued clean-up of the debris after investigations were completed to determine the cause of the fire.

“Demolition contractors like Cherry are usually pre-qualified by municipalities and First Responder organizations for disaster response so that they will be ready to provide important assistance with search and rescue efforts, as well as with any structure where demolition is needed to aid in fire abatement,” Caulfield explained. The NDA has been reaching out to these groups on an ongoing basis, including the International Association of Fire Chiefs, where representatives from the NDA made a presentation at the Fire-Rescue International Conference.